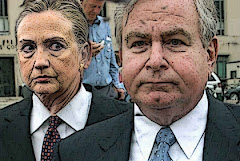 CIA ex-boss John Brennan and former director of national intelligence James Clapper have been targeting Trump, implying that the president “can be played,” as Brennan put it, by Vladimir Putin. President Trump fired back that Brennan, Clapper and former FBI director James Comey were “political hacks” and that the investigation into Russian interference was a “Democratic hit job.”

Political hacks are powerful government officials who deploy their influence for partisan purposes. That practice reached new depths during the administrations of President Bill Clinton and First Lady Hillary Clinton.

Samuel “Sandy” Berger met the Clintons on the McGovern campaign in 1972 and during the Carter administration he served as deputy director of the State Department. The Clintons picked Berger as their top foreign policy adviser during the 1992 campaign and once in power named him deputy national security advisor.

In 1997, the Clintons promoted Berger to National Security Advisor and he was heavily involved in advising the president on the terrorist attacks on the Khobar Towers in Saudi Arabia and U.S. Embassies in Kenya and Tanzania. Berger was unable to prevent those attacks but he did gain fame on the home front.

Berger was a representative to the 9/11 Commission, which gave him special access to classified material about the Clintons’ record on terrorism. In 2004, several months before his testimony, Berger slipped into the National Archives and ripped off classified documents and notes. The former National Security Advisor stuffed documents into his pants and wrapped some around his socks. Berger stashed the stolen material on a construction site then returned to retrieve it. 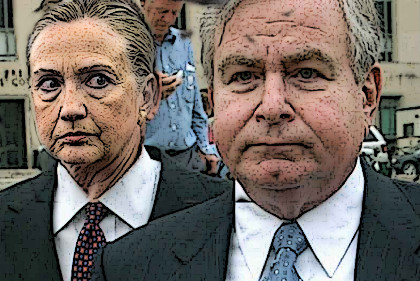 This was a serious crime but political hack Sandy Berger cut a deal with the Justice Department to get out of jail, pay a $50,000 fine, and avoid a full explanation of what he had ripped off. Berger also lost his security clearance but the matter did not end there.

As Ronald A. Cass noted in “Sandy Berger and the Clinton Cover-Up - Why It Matters,” in 2007 the DC Bar began to probe what Berger had stolen and why he stole it. To keep from answering those questions, Berger duly surrendered his law license. For Cass, author of The Rule of Law in America, that confirmed Berger “must be hiding something important. And if it is that important to him, it is also important to us.” Most likely, the stolen material “points to a terrible mistake by Berger himself, by President Clinton, or by both” in failing to stop al-Qaeda.

What was at stake, Cass explained, was “more than the prospects for Hillary Clinton becoming the Democrats’ presidential nominee and ultimately the President,” because “our security and vitality of the rule of law in America are at stake as well.” Even so, the Justice Department failed to pursue the case, the media were not interested, and Congress opted for “more promising political fodder than one that might point back to the Clintons.”

Berger’s criminal hack work made him a star with prominent Democrats. In 2014, the 44th president invited Berger to a private dinner with a group of foreign policy experts. Berger was a big promoter of the Iran deal and when he passed away in December of 2015, the president praised him as one who “devoted himself to strengthening American leadership” and a man “remembered fondly within the ranks of the National Security Council, where those he mentored carry on his work.”

In a Clinton Foundation press release, Bill and Hillary Clinton hailed Berger as “a consummate National Security Advisor because he embraced our common humanity and advanced our national interests.” No word about the documents he stole but Hillary Clinton certainly adopted Berger’s style with her “extremely careless” handling of classified material, as FBI boss James Comey put it.

Comey had been batting cleanup for the Clintons since he was a U.S Attorney. The pathetic James Clapper believes the Muslim Brotherhood is a secular organization. Political hack John Brennan is of greater interest because he never should have got in the CIA door, for any reason.

In 1976, year of the American Bicentennial, Brennan voted for slobbering Stalinist Gus Hall for president on the ticket of the Communist Party, the political party of a hostile foreign power. Russia influenced American elections by running their own candidates, and the Communists played Brennan into voting for them.

Former Clinton National Security Adviser Anthony Lake failed to become CIA director because he thought Alger Hiss might be innocent. Brennan touted his vote for the CPUSA and got the top job at the CIA, a security lapse of epic proportions.

As President Trump says, Brennan is a political hack and the investigation of Russian influence is a Democratic hit job. For the Justice Department, the media and Congress, that should give way to investigations that point back to the Clintons. Attorney General Jeff Sessions now seems inclined in that direction and there’s plenty to consider.

Try the 30,000 emails, the Clinton Foundation, and the Uranium One business, just for starters. Given the time, resources, and dedication, the investigations might even discover what classified information Clinton National Security Advisor Sandy Berger destroyed and why he destroyed it. As Ronald Cass said, “our security and vitality of the rule of law in America are at stake as well.”

Ah, good ol' Sandy Burglar! I hope they do find out exactly what was so embarrassing to Bill Clinton that that they had to have Sandy steal the original notes!