DETAILS EMERGE ON #CHARLOTTESVILLE DRIVER: A Left-Wing Millenial Who Mistakenly Drove Over Antifa?

Update: Several reporters have deleted their original posts, which were used for the material below. Be advised that -- until law enforcement releases the name of the suspect -- all of these externally sourced research details are in question.

Earlier today, a tragic turn occurred when a car plowed into Antifa and Black Lives Matter counter-protesters. One pedestrian was killed and dozens injured, some seriously.

The left-wing, totalitarian groups had seemingly gathered not just to protest, but to attack White Nationalists.

Internet researchers used photos of the vehicle to track down its probable driver. It would appear that the car terrorist is -- in all likelihood -- a "left-wing, open borders, Trump-hating pot-smoker."

You can review the research material below, and judge for yourself. In addition, GotNews scoured social media for the alleged attacker's background [Editor's note: GotNews suddenly removed its article, leading to the update below]. 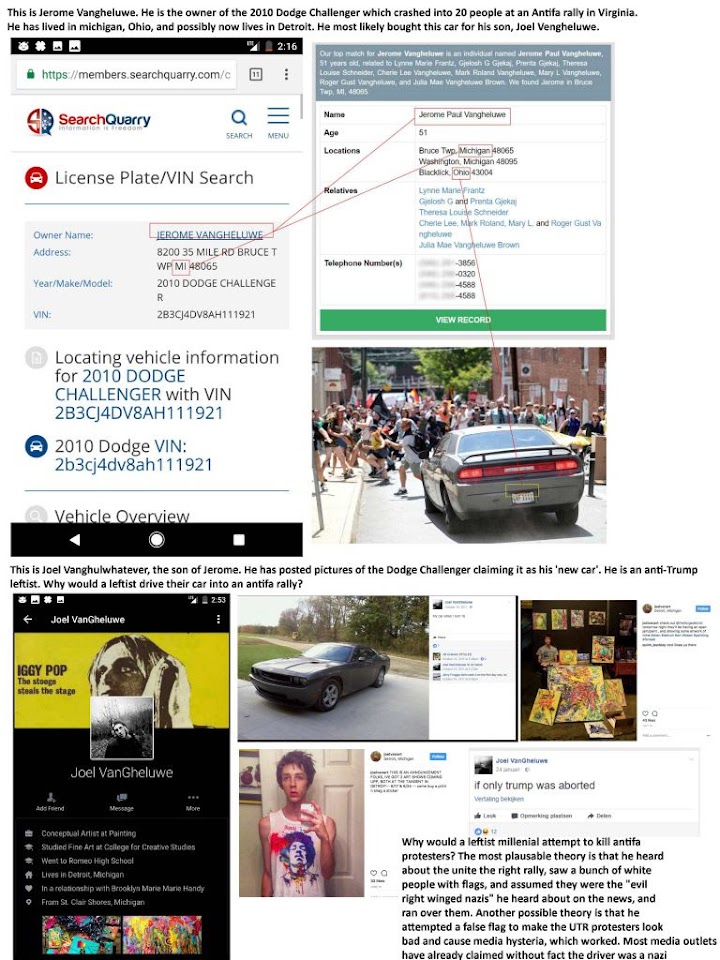 Speech, no matter how loathsome, is speech. Violence is action.

The fact that Antifa attacks not just White Nationalists, but anyone with an opposing political opinion, made this tragic event quite predictable.

Antifa is a terrorist group and should be treated as such.

Don't ever turn your back on one those analtifa folks.

The Klan and other evil right-wing militant evil buttholes wouldn't fight, so they had to create an incident?

Funny, where's the 30 minutes of video from before the incident? Hmmmm... Hmmmmmmm....

This is the way it is being reported now.

Video of the Dodge Challenger, which is registered to James Alex Fields, of Ohio, shows the driver accelerating into the crowd throwing bodies into the air as people scream before reversing at high speed. The incident killed a 32-year-old woman, whose identity has not been released by authorities pending her family's notification. The alleged driver of the car was apprehended and is currently in police custody. He was arrested a few blocks away from the bloody scene. According to The Washington Post, a man with the same name and age of Fields was booked into the Albemarle-Charlottesville Regional Jail on Saturday.

Get that there pot into you now, y'hear?

Get a clue Andrew ...the KKK is and always was a left wing institution. Look it up. While you're at it look up the Nazi party.

You get the idea. Democrats and liberals have a violent core. They are as dangerous to America as any Communist or Islamist.

Fake news,the driver is a right wing, Trump voter who lives with his mother, this is just a chance to take a cheap shot at Antifa.The counter protesters were multiracial, mostly peaceful, look At the contrast,in the groups of Marchers

I know Where it is, a right wing woman infiltrated antifa and took video showing antifa to be pleasant, with high morale, multi racial,counter protesters, who stumbled on the terrorist incident By a neo Nazi... Goldie, something...

Any polysci 101 class will teach you that you're wrong. People can call themselves anything, that doesn't make it so. It's what they do, how they act. Both groups are on the far right of the Political landscape. Unite the right.

Your comment would be laughable if it weren't treasonous. Blatantly false, and the reason for government gridlock. Governing by reaching across the aisles, has always been essential. You attempt to portray your fellow Americans as enemy combatants, and misrepresent, in order to do so, hurting the country, in an attempt to be right. You are the American Taliban, you are the problem.

Ohio plates, you right wing websites don't have a decent reporter between you all.