In Dallas, a black nationalist activist shot and killed 5 police officers at a Black Lives Matter anti-police rally. Instead of condemning BLM, Barack Obama defended a racist hate group whose role model is Assata Shakur, a wanted black nationalist cop killer, at the funerals of the murdered officers.

The left killed civil rights and replaced it with black nationalism. The racial supremacism of black nationalism that killed those officers is everywhere.  Ta-Nehisi Coates and Ibram X. Kendi are lionized as brilliant thinkers instead of hateful racists, Amazon has ordered a black nationalist secessionist fantasy from Aaron McGruder and Showtime aired ‘Guerilla,’ a miniseries glamorizing Black Panther terrorism.

But racism is a two-way street. So is violence. Extremists feed into each other.

You can’t legitimize one form of racism without legitimizing all of them. The media may advance this hypocritical position. Obama used the shameful “reverse racism” euphemism that distinguishes between black and white racism. But propaganda and spin don’t change the physics of human nature.

Charlottesville is what happens when you normalize racism and street violence. Every normalization of extremism equally normalizes the extremism of the opposite side. 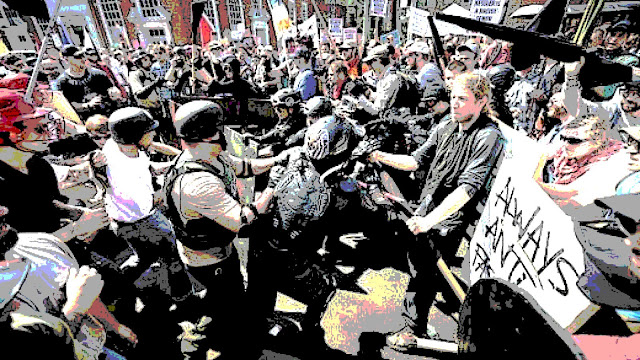 That’s true of black nationalists and white nationalists, of Communists and Nazis, of Antifa and  Vanguard, of the tankies and hipster Nazis of the Alt-Left and the Alt-Right. They’re a set of evil twins and when you unleash one, you unleash the other. Their real enemies aren’t each other, but everyone in the middle. The bourgeois normies who don’t want to replace society with their totalitarian nightmare.

Street violence raises the bar so that only the violent will participate in protests. If you “no platform” campus speakers, then the only speakers you get will be those willing to face bomb threats, arson, and physical assaults. If you fire people for their views, political activism becomes the province of anonymous trolls and unemployed street thugs. Extremism limits political discourse to extremists.

If Democrats really want to stop the rise of Neo-Nazi violence, there’s a very easy way. Stop normalizing black nationalism and the Alt-Left. End the racist witch hunts for white privilege. Make it clear that street violence is unacceptable and that racism is bad no matter who it comes from. Allow people you disagree with to express their views without trying to destroy their lives.

The Dems have become an extremist party run by the radical left. Obama, Holder, and Lynch made common cause with black nationalist hate groups against civil society. It began when Obama defended the vile racism of Jeremiah Wright and concluded with DOJ organized race riots. DNC boss Tom Perez addresses La Raza and his deputy Keith Ellison is a veteran of the Nation of Islam.

The radical left wants to see Neo-Nazis gain prominence on the right to polarize the country. It wants to see our values and norms drowned in violence so that it has an excuse to eliminate free speech. It seeks to eliminate democracy by making the other side appear nightmarishly dangerous. It plots to impose a totalitarian system on the United States by empowering extremists to destroy the current system.

And their opposite numbers waving swastika flags want the same thing. The difference is that they don’t control the Republican Party the way that the Alt-Left and black nationalists control the Democrats.

Charlottesville is what happens when civil society fails. And those who set the terms of permissive discourse, who control the media, academia and social norms, are responsible for the failure.

Conservatives don’t have that kind of power. It’s the left that does.

Liberals, if there are any left on the left, can shut down racism and extremism. Or they can continue normalizing it until it’s mainstream and meaningless.

If you want to understand how we got to Charlottesville, the events at Evergreen State on the other side of the country are as good a place as any to start.

Evergreen’s President Bridges, the progressive who had called for safe spaces and allowed intersectional left-wing racists to terrorize his campus over their demands for racial segregation, was asked in an interview about accusations that he is a white supremacist.

White privilege is how the intersectional left defines white supremacy. Any white people who aren’t allying with them to destroy Western civilization are defined as white supremacists. And even those who do, like Bridges, can always be accused of white supremacy for not destroying it hard enough.

When you spend enough time accusing everyone who doesn’t share your politics or even your race of racism, you make the term meaningless.

That’s what the left did over eight years of Obama. By the time the election rolled around, Hillary was defining all Trump voters as racists and sexists.

When you spend enough time crying wolf, eventually a real wolf appears. A real wolf showed up in Charlottesville.

The left spent eight years dismantling any meaningful definition of racism for political reasons. The practical effect of their actions was to eliminate social sanctions for actual racists.

And the real racists were happy to take advantage of the new climate.

If you tell all Obama critics and Trump supporters that they’re racists often enough, some will decide that maybe they are racists.

If you tell a student who objects to racially segregated areas on campus that she is a white supremacist, she will be more likely to become one.

When you marginalize everyone to the right of you, some of the marginalized will accept the definition.

And when that happens, the left wins, the extremists win, and it becomes harder to maintain any kind of functioning civil society in which we settle conflicts through compromises rather than street violence.

After the Civil War, the Union was preserved, but Southerners were allowed to honor their cause. It was an uncomfortable compromise, but it helped limit the violence from a conflict that had claimed the lives of 2% of the population. The Taliban campaign by black nationalists to tear down Confederate memorials was a deliberate effort at shattering a compromise that kept civil society working.

And that too led to Charlottesville.

Uncomfortable compromises are how we learn to live with each other. It means that there can be memorials of Robert E. Lee and streets named after Malcolm X. Tolerating people whose views we don’t like is one of the best ways to marginalize domestic extremists. When one set of extremists is empowered to wipe out the other, we end up with a civil war. Just ask Edmund Ruffin and John Brown.

Democrats claim a mandate from the “Right Side of History” to eliminate all the compromises. Catholic nuns must pay for abortions and birth control, Christian bakers and florists must participate in gay weddings, every white person must confess their racism, and every left-wing extremist must get their way.

That’s how you tear a society apart.

The Bill of Rights is an uncomfortable compromise. It says that we have to put up with people we don’t like. The Democrats, under the influence of the left, are rejecting that idea. But that goes both ways too.

You can have a liberal society or an illiberal one. But you can’t have a society that is selectively liberal when it comes to your bigotry, but illiberal of the bigotry of others, that believes you have the right to say anything you please without consequences, but that no one else does, that you can punch, but not be punched. That’s a totalitarian state. And the only way to realize it is through violence.

Democrats need to take an honest look at the street violence in Seattle, in Portland, in Berkeley and Charlottesville, and decide if this is what they really want. If they don’t, it’s time for them to stop normalizing left-wing extremism. If they do, then they are to blame for the next Dallas or Charlottesville.

The citizen must not be so narrowly circumscribed in his activities that, if he thinks differently from those in power, his only choice is either to perish or to destroy the machinery of state.