While Trashing Trump, Apple Sells Its Soul To Do Business In China

By Eric Lieberman and Ryan Pickrell

Tech giant Apple Inc. is increasingly caving to the demands of communist China in order to stay in a market where it is losing ground and advancing authoritarian objectives in exchange for short-term profits and, potentially, long-term losses.

China is Apple’s second-largest market and could eventually become the company’s biggest market, but Apple’s China sales are declining. As the company struggles to maintain a share of the Chinese market, it has increasingly kowtowed to Beijing, delivering blow after blow to internet freedom, human rights causes, and fair-market practices. At the same time, its leadership continuously criticizes the American president while harping on progressive causes at home.

Apple rang in the New Year by removing The New York Times app from its Chinese app store, complying with a request from Chinese government regulators. In mid-July, the company announced that it is building a data center in China to adhere to the country’s autocratic new cybersecurity laws, which gives China the ability to seize information on possible political dissidents and potentially pilfer foreign technology. Apple also removed Virtual Private Networks (VPNs), software essential for Chinese users who desire internet freedom and the ability to jump “the Great Firewall of China,” from its app store later last month, capitulating to Chinese government demands. 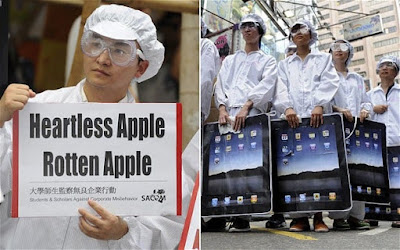 “We would obviously rather not remove the apps,” Apple CEO Tim Cook said in response, adding, “But like we do in other countries, we follow the law wherever we do business.”

This development “represents the most drastic measure the Chinese government has taken to block the use of VPNs to date, and we are troubled to see Apple aiding China’s censorship efforts,” ExpressVPN said in a related statement, arguing that such actions “threaten free speech and civil liberties.” Apple has been noticeably silent on rising Chinese censorship.

“Apple’s response is disappointing,” Eva Galperin, director of cybersecurity at the Electronic Frontier Foundation, told TheNYT. “I think it is possible that Apple is playing a bigger role behind the scenes here, but the problem with that is, from the outside, it looks exactly like doing nothing.”

The reality is that Apple has been in bed with the Chinese government for years, due largely to Cook’s decisions concerning the global supply chain. The company has been producing its products overseas, employing foreign labor, and in some cases, contributing to the deterioration of Chinese society through the alleged exploitation of labor and suppression of human rights.

“I’ve never found being on the sideline a successful place to be,” Cook told Apple employees last year. “The way that you influence these issues is to be in the arena. So whether it’s in this country, or the European Union, or in China or South America, we engage. And we engage when we agree and we engage when we disagree. I think it’s very important to do that because you don’t change things by just yelling. You change things by showing everyone why your way is the best.”

But, by and large, when it comes to activities in China, Apple has demonstrated that it is committed to raking in the dough. “They’ve made a lot of money off of operating in China, selling in China, producing in China, and exporting,” Derek Scissors, a resident scholar at the American Enterprise Institute focusing on the Chinese economy and U.S. economic relations with Asia, told The Daily Caller News Foundation. Apple is expected to make enormous amounts of money off of the next iPhone, and that gives China leverage — specifically the ability to squeeze them to make concessions.

Despite the lofty rhetoric on human rights, Apple’s core aspirations are naturally financial — and so the company caves. “The downside to cooperating with China on their internal security measures, which is what we’re talking about with Apple, is moral,” Scissors remarked. “Maybe the company doesn’t care.”

Apple is not Google, which was kicked out for failing to follow Chinese censorship requirements, and it is significantly more involved in the Chinese market. Apple could exercise leverage in an attempt to make changes in China, but so far the company has consistently given way when pressured by the government.

“Liberal social justice CEOs, such as Apple’s Tim Cook, like to champion human rights and stand up to local and federal governments here in the United States when it is politically expedient and the stakes are low,” National Center for Public Policy Research General Counsel and Free Enterprise Project Director Justin Danhof charged in a statement. “But when faced with pressure from a regime such as China that actively squashes the most basic of human rights – such as the right of free speech and expression – they seem all too willing to show their true colors and help keep the Chinese people in the dark.”

Cook is on the board of directors for Robert F. Kennedy Human Rights, a non-profit organization that works “alongside local activists to ensure lasting positive change in governments and corporations,” according to its website. “Tim knows the importance of advocating for and representing people who have not been heard,” organization President and CEO Kerry Kennedy stressed when Cook joined the board. “He has integrity and does not shy away from challenging issues when he knows they are right and just,” she added

The organization did not respond to request for comment about Apple’s contributions to Chinese censorship practices.

In the U.S., Cook has strongly protested the Trump administration’s withdrawal from the Paris agreement on climate change, its suspension of travel from certain countries, its proposed immigration restrictions, its unwillingness to further certain LGBT causes, and the transgender ban for the U.S. military, presenting himself and his company as activists for prominent liberal progressive causes. But abroad, Cook has been working closely with the Chinese government.

Apple’s CEO has celebrated China as the “place to be.”

“If you look at the long term, it is clear that China is such a great place to be,” Cook told Chinese reporters in a 2015 interview with Chinese state media, “China is a superb place to be.” He reportedly made assurances that his company would contribute to the development of the Chinese economy.

To strengthen its position in China, Apple has created more than twice as many jobs in China than it has in the U.S. The tech conglomerate has also made plans for the investment of hundreds of millions of dollars in Chinese research and development centers. In March, Apple announced that it had created 4.8 million jobs in China — over two times as many jobs as it created in America, and that it plans to invest over $500 million in research operations in Shanghai and Suzhou.

The working conditions for the laborers are questionable, though.

While Apple has been lightly criticized for its recent actions, some observers claim the company doesn’t really have a choice. “Apple taking a stand alone doesn’t change the state of affairs on the ground,” Ryan Hagemann, director of technology policy at the Niskanen Center, told TheDCNF. “It would take a concerted effort by a wide array of multinational corporations doing business in China to fundamentally alter the Chinese government’s restrictive approach to market purchases; and even then, nothing is guaranteed.”

“If Apple takes a stand̵#8211;and make no mistake, they would be making that stand alone–all they lose is the ability to sell their products and services to otherwise willing consumers,” he added.

The problem, though, is that Apple appears to be selling its soul to a country that is simultaneously trying to ultimately reduce the company’s share of the domestic market.

“Over time, Apple is going to lose market share,” AEI’s Scissors explained. “It doesn’t seem very wise long-term strategy to give the Chinese what they want when you are facing this uphill climb to maintain your position in China.” Sales in China account for roughly 25 percent of Apple’s total sales, and the company maintains control of around 14 percent of the market share in the country. But Chinese competitors are gaining ground with the help of the same Chinese government that Apple is assisting.

The Chinese tend to drive foreign companies out once they establish a domestic competitor base. They empower their own companies through state subsidies and non-commercial loans, as well as through regulations and market access restrictions. “That is a long-standing Chinese pattern,” Scissors told TheDCNF.

“The Chinese are going to take market share away from Apple” no matter what the company does, he added, explaining that Apple is in it to make significant profits in the short term, which is not a problem for a cold capitalist enterprise, but notably hypocritical for a company with leadership that claims to stand up for human rights.

Does Apple want be seen cooperating with an authoritarian system? They’ve already answered yes to that, and over the years, they have been furthering the Chinese government’s objectives while the latter attempts to perniciously cripple them. The only real explanation for their decision is massive short-term profits from the pockets of an oppressed people.

Apple did not respond to multiple requests for comment.

I just deleted Google from my search bar because of this...
http://www.thegatewaypundit.com/2017/08/truth-hate-crime-google-fires-employee-sent-email-calling-viewpoint-diversity/
Will now switch to...
https://www.ixquick.com/

The question remains, since my IPhone isn't 6 months old yet, and not paid for, I guess I'm stuck with it for a while. Any suggestions on what to get as soon as I can rid myself of that turkey? Thx.