Via Weasel Zippers, we see another (completely coincidental) instance of #FakeNews memes promoted almost as if they'd been coordinated.

First there was Clinton spokeshack Brian Fallon, followed immediately by a wave of other fakestream miscreants.

Only one teensy, eensy problem with the comparison: the Allies were confronting an army that had already waged war across Europe and slaughtered millions, not a hundred or so low-IQ kooks who had secured a permit to hold a protest. The kind of protest, by the way, that was ruled legal by the U.S. Supreme Court nearly 40 ears ago when a similar bunch of inbreds wanted to march in Skokie, Illinois. 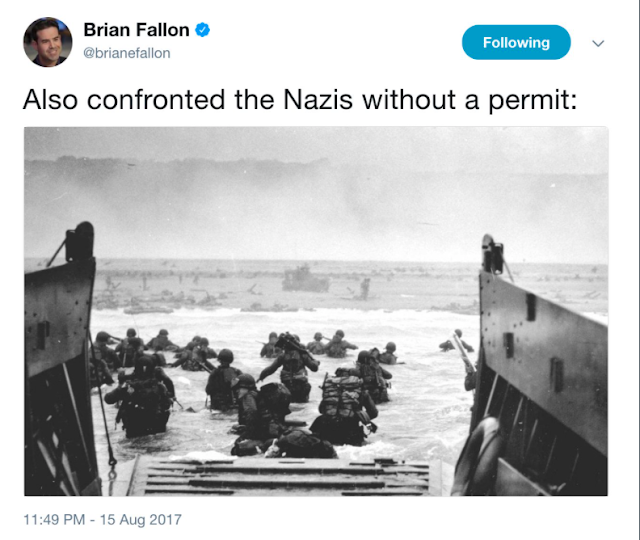 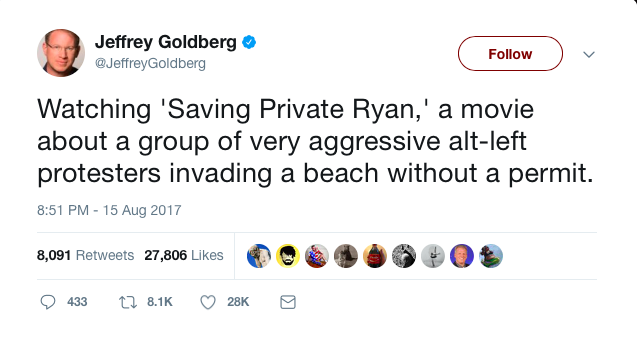 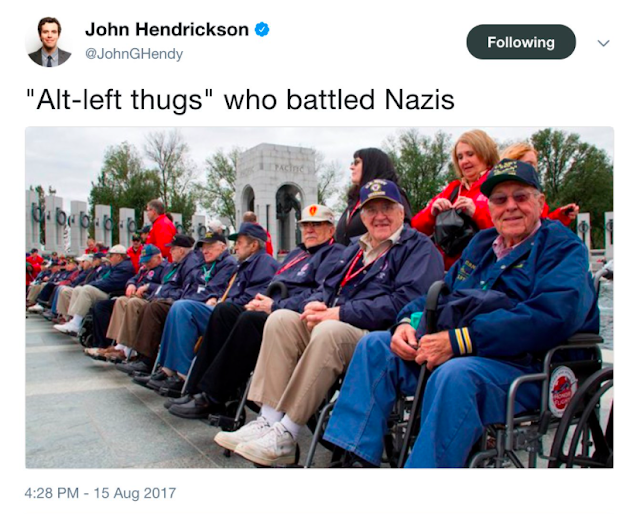 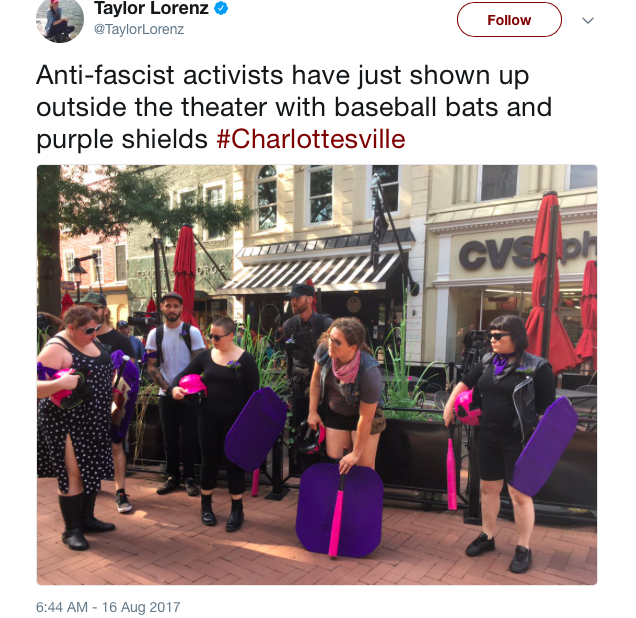 Speech is still lawful, no matter how loathsome it may be. The Nazis had a permit to demonstrate. Antifa did not. And "Punching Nazis" is not lawful.

Had Antifa ignored these scumbags, no one would have been hurt or killed.

Antifa are fascists and terrorists who have been committing acts of violence for a year now.

Your average jamoke has never heard of Antifa, thanks to the #FakeNews media that censors stories injurious to the progressive/communist left.

I also notice that Antifa uses communist symbology, a movement that killed 100 million in the 20th century alone. It's as repulsive as the swastika and just as blood-soaked.

Nazis need to be ignored, not given free PR. Especially given that this was a 'national rally' that garnered all of a hundred or so people.

And racist groups like BLM need to be treated the same way, not invited to the White House the way the prior administration did.

"Hands up, don't shoot" was a lie and the officer in question was exonerated. That didn't prevent fakestream media from promoting racism and hatred through these lies.

The media orchestrated this madness.

How about we disavow racism and violence on both sides of the aisle? And ignore the fringe lunatics being marketed as some kind of substantial political force?

Oh, if only I could be there with my foam-padded sword LARPing gear and my birdseed packets to cast "Lightning bolt! Lightning Bolt!"


and on a side note I am really sick of seeing lawnewz headlines on Badblue.

I don't mind reading the other side but that site is off the wall.

Drudge has been crap, I barely look at it anymore. Let us hope it doesn't happen to Badblue.

Sometimes, the enemy of my enemy is still my enemy.

By siding with them, the media shows it's true colors. They also are an enemy of Civilization.

I guess I must have missed a great deal of what American soldiers did.


The Left has the morality of Bill Clinton, the usefulness of a condom at a lesbian convention, and the honesty of Grubber describing Obamacare.

The numbnuts saying D-Day was conducted "without a permit" must be totally clueless as to what a "declaration of war" means.

Hillary's Blackshirts in Antifa are identical in nearly all respects to Hitler's Brownshirts, both in their politics and their preferred method of using violence to silence anyone opposed to their radical socialist agenda.

The only real difference was the Brownshirts were typically union thugs while the Blackshirts are unemployed pajama-boys >90% of whom still live in Mommy's basement.

"Transported to a surreal landscape, a young girl kills the first person she meets and then teams up with three strangers to kill again."
-Lee Winfrey writing of Dorothy-
When Americans grow tired of subversives telling us what's real, this will stop.

have you noticed that these stories have all but disappeared since Pelosi, et al, came out 'against' ANTIFA?