Trump at His Best at The UN Today 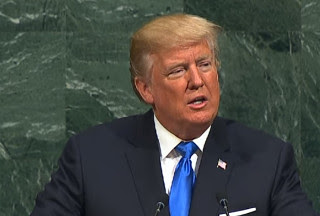 Trump made a great speech at the UN today. The kind that got him elected in the first place. You should really watch it from beginning to end right here.

Now let's see if Trump follows thru, like he hasn't since he became president. Of course, if he doesn't, again, his idol worshipers can blame the people Trump hired and who work for him at his pleasure. (He is the most powerful man in the world, isn’t he?) So then he can fire them and hire new people who can then be blamed again for his failure to keep the promises he makes in his great speeches. And if that doesn’t work, his die-hard minions can always scapegoat the “deep state,” or whatever.