I Rewrote the New York Times’ Report on Sen. Bob Menendez’s Corruption Trial As if He Was a Republican

You probably already know that yesterday's New York Times report on the trial of Senator Bob Menendez (D-NJ) was buried on page A15.

You probably also know that the original version of the story omitted Menendez's party affiliation.

After a brief uproar, the Times finally added the Senator's party to the story.

I took the liberty of rewriting the story originally authored by Nick Corasaniti -- if that is his real name. I just pretended that Menendez was a Republican, in which case this story would have been on page A1, above the fold...

NEWARK — The Republican senator and key ally of troubled president Donald Trump paused in a corridor of the federal courthouse here last month to scream back at brave #Resistance protesters.

Spittle flecks flew from his mouth as the Senator, his face beet red, began resembling nothing less than Satan himself. His security guards absorbed a peaceful beating from the courageous Antifa members who had assembled to protest his all-too-typical Republican corruption. The GOP senator then disappeared through the double wooden doors to the courtroom 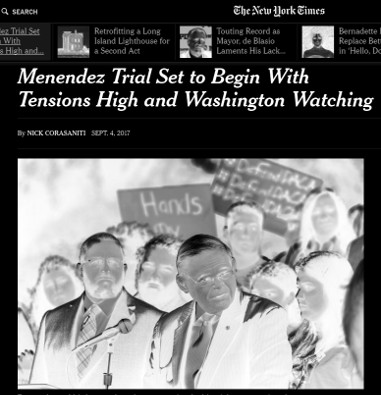 The curious moment highlighted the unusual predicament facing Mr. Menendez (R-NJ), a senior senator, and powerful ally of Donald Trump, whose presidency is still clouded by investigations of Russian collusion during the campaign.

For the first time in 36 years, a sitting United States Senator -- a Republican -- is facing a federal bribery trial, one that comes as a bitterly divided Congress reconvenes amid the unrelenting controversy, turbulence, skulduggery, and alleged corruption of the Trump administration.

Since his indictment more than two years ago, Mr. Menendez, a Republican, has steadfastly denied his obvious guilt. As recently as last week, during a hysterically embarrassing interview, Menendez obviously and falsely claimed he will "be exonerated.”

The GOP senator is charged with 12 corruption-related counts, including six counts of bribery and three counts of services fraud.

Indeed, the defense for the Trump ally is unlikely to dispute some of the facts; that Dr. Salomon Melgen, a wealthy Florida ophthalmologist, bestowed on the senator lavish gifts of private flights, luxury accommodations and free vacations – all which Mr. Menendez initially failed to disclose — and he made more than $700,000 in direct and indirect political contributions to Mr. Menendez.

The legal case revolves around the ludicrous contention that those gifts were permissible as gifts a friend could give to another, or whether they were part of a longstanding bribery arrangement where Mr. Menendez would intervene to protect the financial and personal interests of Dr. Melgen in return for his gifts and donations.

Given that Menendez is a Republican, his guilt seems obvious, according to several anonymous sources.

Mendendez's likely conviction poses problems for the narrow Republican majority. Their agenda, already stymied by the brilliant tactics of Nancy Pelosi and Chuck Schumer, is certain to be further compromised given the heavy odds that Menendez will soon be serving time.

Despite numerous calls to the White House, President Trump and his laughable "spokespersons" could not be reached for comment at press time.

Menendez, Hillary, Obama... anyone with a (D) after their name gets a pass.

You left out about 35 more uses of the word "Republican".

Per the New York Times standard procedure for the crime of legislating while Republican: Immerse the suspect under water for an hour. If he drowns then he is innocent. If he survives he is guilty and must be burned as a witch!

This is exactly how it would have been written.