Citing Comey’s bungling of the Clinton email investigation, President Trump unceremoniously fired him by press release on May 9, three-and-a-half years into his 10-year term. Trump was attacked in the media for not caring about Comey’s presumably hurt feelings. He based his decision on a U.S. Department of Justice memo authored by Deputy Attorney General Rod J. Rosenstein that found Comey had, among other things, usurped then-Attorney General Loretta Lynch’s authority by taking it upon himself to unilaterally clear Clinton.

Rosenstein excoriated Comey, whose side of the story has long been championed by the media. “I do not understand his refusal to accept the nearly universal judgment that he was mistaken. Almost everyone agrees that the Director made serious mistakes; it is one of the few issues that unites people of diverse perspectives.”

Comey’s endless posturing and palace intrigues damaged the FBI, causing morale to plummet. As a result, “the FBI’s reputation and credibility have suffered substantial damage, and it has affected the entire Department of Justice,” Rosenstein asserted. “That is deeply troubling to many Department employees and veterans, legislators and citizens.” 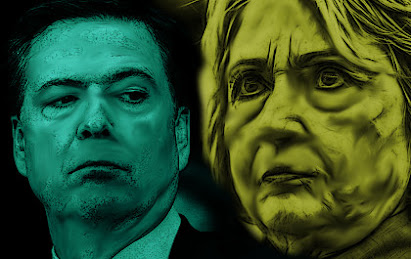 Of course, critics savaged Trump’s rationale for axing Comey at the time, claiming as the supremely silly Russian collusion conspiracy theory was gaining traction in the media, that the president was obstructing justice to save his own skin.

Exploding in huge, scary fireballs of anger visible from orbit, they ridiculed him, calling him a budding dictator. They claimed he had created a dire constitutional crisis. They demanded his impeachment and imprisonment – or worse.

But once again it appears Trump was right about a media-saturated, manufactured matter of public controversy, one in a series that over the president’s brief time in office has whipped the yet-to-exhausted Left into a frenzy.

Upon Comey’s dismissal, Trump said the FBI “is one of our nation’s most cherished and respected institutions and today will mark a new beginning for our crown jewel of law enforcement.”

As Americans are now painfully aware, the congenitally devious Clintons had created a hacker-friendly, slap-dash private email system while she headed the U.S. Department of State to frustrate Freedom of Information Act requesters, shield Hillary's correspondence from congressional oversight, and steer money to the international cash-for-future-presidential-favors clearinghouse known as the Bill, Hillary and Chelsea Clinton Foundation. The “homebrew” email servers Mrs. Clinton used are at the heart of the scandal over her mishandling of an Islamic terrorist attack in militant-infested Benghazi, Libya on the 11th anniversary of 9/11 that left four Americans, including U.S. ambassador Chris Stevens, dead.

The case that the handwringing, sanctimonious Comey was thoroughly corrupt, exquisitely marinated in the swamp waters and flesh pools of decadent official Washington, was already fairly solid but with these new revelations it seems even more obvious that he was less top cop than grand inquisitor. He thought of himself as judge and jury, justice be damned. As long as he ended up looking good, all was well, in his eyes.

"Conclusion first, fact-gathering second—that's no way to run an investigation," read the correspondence. "The FBI should be held to a higher standard than that, especially in a matter of such great public interest and controversy."

The testimony appears to establish that Comey started working on a public statement giving Clinton a clean legal bill of health before the FBI had gotten around to speaking with 17 witnesses in the probe, including Clinton and two of her senior aides, Cheryl Mills and Heather Samuelson. The two senators noted that Comey began working on his exculpatory communique even before Mills and Samuelson brokered what the lawmakers called a “highly unusual” limited immunity deal with the Justice Department that prevented officials from looking into communications between the two aides and Colorado-based Platte River Networks, which oversaw Clinton’s unusual email system after she left Foggy Bottom to run for president.

"According to the unredacted portions of the transcripts, it appears that in April or early May of 2016, Mr. Comey had already decided he would issue a statement exonerating Secretary Clinton," the letter by Grassley and Graham stated.

That was long before FBI agents finished their work. Mr. Comey even circulated an early draft statement to select members of senior FBI leadership. The outcome of an investigation should not be prejudged while FBI agents are still hard at work trying to gather the facts.

There was never any serious possibility that Hillary Clinton would have been indicted. And we know that. But throughout the process, Comey pretended that he was dotting all the i's and crossing all the t's. But it was all a show. Comey and his top people knew what the outcome would be ahead of time. They were just going through the motions.

Fitton added that the FBI also appears to have helped to pay for opposition research against Trump. He was referring to the Russian "piss-gate" dossier published by cat-video website BuzzFeed. "They started paying, it looks like, the expert behind the dodgy dossier ... during the campaign."

"We asked the FBI for documents about any payments they made to the author of the Trump-Russia dossier and they came back to us and they said we can't even confirm or deny whether any such documents exist.”

The FBI is not being run, Fitton said, by "someone with the interest of the American people [in mind] in terms of getting some transparency about the misconduct of the FBI during the Obama administration as they were working to, really, nail Trump through this really awkward – and let's put it this way – conspiratorial relationship with the authors of the Trump dossier.”

By now politics junkies don’t need to be reminded it was at an unusual, much-watched presser on July 5, 2016, that Comey acknowledged the massive body of evidence that was accumulating against Clinton and described it at some length. He stipulated that the former secretary of state probably broke the law when she used hacker-friendly private email servers to conduct official business.

But after airing this very dirty laundry, Comey inexplicably gave Clinton a pass. “Although there is evidence of potential violations of the statutes regarding the handling of classified information, our judgment is that no reasonable prosecutor would bring such a case.”

Guided by politics, not the law, Comey pontificated that Clinton and her aides were “extremely careless” in their handling of classified documents but that there was no evidence of criminal intent. He made this statement even though the relevant national security statute does not actually require intent: mishandling intelligence, even inadvertently, is enough to land people with less pull than Hillary has, in hot water.

As former federal prosecutor Andrew C. McCarthy wrote at the time, “the FBI rewrote the statute, inserting an intent element that Congress did not require.”

So, as it turns out, Comey was ripped from his powerful perch in the nick of time.

Some critics say the media-savvy, morally preening Comey presided over a J. Edgar Hoover-like reign of terror while he ran the FBI.

Comey was far more powerful than an FBI director ought to be. When the president fired Comey, Brit Hume observed, “For better or worse, no FBI director since J. Edgar Hoover had taken so large a role in the political life of this country as James Comey.”

Around the same time Tucker Carlson was positively scathing in his assessment of Comey’s tenure. He said lawmakers on both sides of the aisle were intimidated by Comey – and for good reason.

Just how powerful was James Comey? Let’s put it this way: He was feared in a way that no appointed bureaucrat should ever be feared in a free society. Time and again elected lawmakers on both sides came on this show and expressed worry and concern about his behavior, but they did so only during commercial breaks with the cameras off. Why? Because they were terrified at the prospect of criticizing him in public. They certainly don’t have that fear of the sitting president of the United States and that tells you everything you need to know about Jim Comey.

That sounds about right.