NSFW: Unless You’re a Senator

It’s Day Four of Sen. Bob Menendez’s (D-NJ) felony bribery and corruption trial, and the foreign girlfriends of his wealthy Medicare-defrauding donor are testifying about how Menendez used his official office to get them visas. Yesterday, we learned Menendez ordered a former staffer to “call Ambassador asap” to push visas through for these “bombshells.”

New York Post: Getting these beauties visas was high on Menendez’s to-do list: aide. “Things to do for a busy US senator: ‘Cuba policy,’ ‘Afghanistan’ — and getting visas for a married pal’s Dominican bombshell girlfriend and her sister.

An ex-aide to Robert Menendez told Newark federal jurors Monday that the senator ordered him to call a US ambassador “asap” on behalf of Rosiell Polanco, a 22-year-old stunner who needed a tourist visa to visit the senator’s wealthy West Palm Beach friend for the Christmas holiday.” (New York Post, 9/11/17) 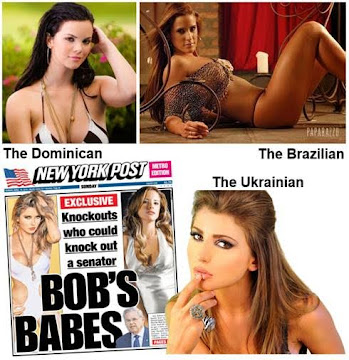 Associated Press: Dominican woman testifies Menendez helped her with visa. “The alleged former Dominican girlfriend of a wealthy donor on trial for bribery with U.S. Sen. Bob Menendez testified Tuesday that her visa application was initially denied and then approved expeditiously after the donor told her he would ‘fix it’ by reaching out to ‘the senator.’

Rosiell Polanco-Suera testified Florida eye doctor Salomon Melgen said he was ‘going to fix it’ by talking to Menendez. She said that at the first visa interview in 2008, she and her sister, who also sought a visa, waited for hours and were treated abruptly.

At the second interview, she said, they had little or no wait and the visa was approved that day. A former Menendez staffer testified Monday that the senator told him to “call the ambassador” after the sisters’ first application was denied. Prosecutors are seeking to show it was Menendez’s improper influence that pushed the visa through.” (Associated Press, 9/12/17)