THE PUPPET-MASTERS: Is China Orchestrating the Democrats` Faux Impeachment Scheme?

Last Thursday, a caller into the Mark Levin Show made a brilliant point: Joe Biden has been completely compromised by Red China, and perhaps other foreign interests. His family members, and perhaps Biden himself, have significant personal wealth now controlled by Beijing.

While his troubled son Hunter may have forfeited his "board seat" (as an aside, how many no-show jobs does this clown have?), his ownership stake in the $1.5 billion "hedge fund" appears to remain in force. The typical fee that managers would charge for these assets would be typically be between $15 and $30 million a year. Nice work if you can get it. And you can't, because your last name isn't that of a powerful Democrat politician.

Biden isn't the only one beholden to China. John Kerry's stepson is a partner in Rosemont Seneca, the investment firm that "partnered" with the Bank of China to create a $1 billion investment fund called Bohai Harvest RST (BHR). As Peter Schweizer notes:

What was not reported was the deal that Hunter was securing. Rosemont Seneca Partners had been negotiating an exclusive deal with Chinese officials, which they signed approximately 10 days after Hunter visited China with his father. The most powerful financial institution in China, the government’s Bank of China, was setting up a joint venture with Rosemont Seneca.

Often those foreign entities gained favorable policy actions from the United States government just as [the Kerry and Biden] sons were securing favorable financial deals from those same entities.

As an aside, Associated Press, you feckless loons, the charges against the Biden and Kerry families aren’t “baseless” as you claim. They’re well-documented. You just have to know how to read a book or use Google DuckDuckGo.

So how did a seemingly drug-addicted ne’er-do-well pull down a $1.5 billion "investment" from China? We know why. Because his Dad was serving as the United States Vice President at the time; he had a reasonable shot at becoming President; and Communist Red China wanted an inexpensive way to control a weak-willed, lifetime politician.

China has not only compromised Biden, it is extremely likely that they are actively colluding with Democrats and the media to take down Trump. 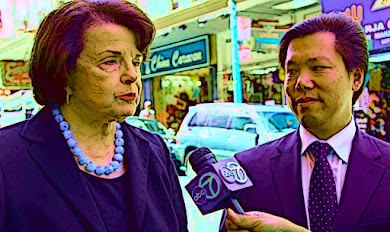 Consider Sen. Dianne Feinstein (D-CA), whose financial ties to the Red Chinese are well-known through her husband, who somehow (like Hunter Biden) landed tens of millions of dollars in "investments" as she chaired the Senate Intelligence Committee. Worse yet, China was able to implant a spy into her staff for about 20 years. But, of course, she knew nothing.

We all know that President Trump is costing China a lot of money.

The media's unprecedented and insane attacks against Trump raise my Spidey-sense.

How much would it take to buy off the likes of Chuck Todd, or Jake Tapper, or Brian Stelter? Probably a lot less than $1.5 billion, that's for sure. Their unhinged and nonstop attacks against the 45th Commander-In-Chief are unprecedented. I don't care about Trump's tax returns. How about Todd's or Tapper's?

President Bill Clinton's traitorous deals with Red China, which involved him trading sophisticated missile guidance technology in exchange for campaign contributions are well-documented. But that kind of collusion is of no interest to the media.

The potential ties between Democrats, Media and Red China make me extremely uncomfortable. In my view, it is likely that the Red Chinese have compromised the Democrat leadership and are now orchestrating the so-called "impeachment" of President Donald J. Trump.

I would say that the whole Democrat party, our corrupted intelligence agencies and Democrat controlled media are all on the dole and heavily invested in the promotion of Communist China and the Socialist counties of Central and South America. They are vested in the transfer of wealth out of the USA and to accomplish it, they need to overthrow our Constitutional form of government.

I have felt that Geo.Soros(who was Obama's Puppet Master)was involved and along w/this great article it IS still feasible, as he Invests Billions. I would hope that these "Traitors to America ARE investigated and held for this collusion WITH CHINA. For years Trump and those who have been paying attention KNEW that we were getting "taken advantage of by China in Many Ways, and Trump brought it into the sunlight, as he has started to UNDO their hold on America
and our citizens in our "Lopsided Tariff and Unloading China's products here in America. It shows now that those mentioned in this article KNOW that they BETRAYED AMERICA AND IT'S PEOPLE FOR 'AMASSING THEIR OWN PERSONAL FORTUNES.....BUT THEY MAY ALSO HAVE THE "lIBERAL, lEFT
MEDIA AS THEIR PARTNERS, WHO "push THE AGENDA TO DEFEAT TRUMP AT ALL COSTS."

I WOULD HOPE THAT THIS ARTICLE GOES "VIRAL AND WE GET THE ATTENTION OF MANY WHO know THAT BIDEN & SON, PELOSI & SON, KERRY & STEPSON, AND OF COURSE DIANNE FEINSTEIN, WHO USED A SPY
FOR 20 YEARS, AND DID HER BEST TO 'STOP JUDGE KAVANAUGH WHEN SHE HELD OUT INFORMATION ON A
"SUPPOSED RAPE VICTIM-PROF.FORD WHO ACCUSED KAVANAUGH FALSELY-BUT FEINSTEIN WANTED THIS TO REACH THE HEARINGS AND DID HER "11TH HOUR HAIL MARY PASS, THAT FUMBLED" BUT SHE DOESN'T CARE AS ANOTHER CROOKED DEMOCRAT, DID HER PART.

ALL THESE 'MONEY-HUNGRY PLAYERS, SHOULD BE INVESTIGATED AND CHARGED WITH SUBVERSIVE ACTIONS
WITH A NATION THAT HAS TAKEN TOTAL ADVANTAGE OF OUR REPUBLIC, OUR SYSTEM OF GOV'T, AND STEALING OUR INTELLECTUAL PROPERTIES, AS THEY CANNOT COME UP W/THEIR OWN IDEAS, SO WE HAVE THESE "CORRUPT PEOPLE IN OUR GOV'T HANDING CHINA WHATEVER THEY WANT-THESE PEOPLE ARE "WHY SO MANY WANT TO GET INTO POLITICS,- "IT PAYS VERY WELL, WHEN YOU SELL OUT YOUR OWN NATION"