The network coverage of the testimony of National Security Council staffer Lieutenant Colonel Alexander Vindman as a “bombshell” and “damning” was laughable and dishonest, implying that his service to his country wearing its uniform made him a credible and unbiased witness without a political agenda. Particularly egregious were the comments of NBC News anchor Lester Holt, who equated wartime courage with peacetime candor. As Newsbusters noted:

After a report on the California wildfires, NBC Nightly News anchor Lester Holt told viewers “[t]here was dramatic testimony in the House impeachment investigation by a decorated war hero who works on the National Security Council and was among those who heard that phone call between President Trump and his Ukrainian counterpart.”

Except that others on the call between President Trump  and Ukrainian President, including those who were charged  with producing a transcript, don’t quite remember the call the way Vindman does. Certainly both participants on the call both said there was no pressure for Ukraine to “dig up dirt” on former Vice President Joe Biden. As for the quid pro quo, we now know the Ukrainians didn’t learn until August military aid had been delayed. The phone call was in July. It’s hard to have a quid pro quo when the party being extorted is not told about the alleged quo. So just what was Vindman’s problem with the call?

In his opening statement, Vindman says he came forward because he “did not think it was proper to demand that a foreign government investigate a U.S. citizen.”  Yet when pressed to explain where in the phone call transcript any demand was made, he lapsed into psychobabble about Ukrainian President Zelensky inferring a demand because of Trump’s more powerful position in the world. As Fox News reported:

Vindman voiced concerns about the investigation request during his interview Tuesday, but was also questioned over his statement that it was not “proper to demand that a foreign government investigate a U.S. citizen.”

A source told Fox News that Vindman struggled for several minutes when asked to point to Trump’s language in the transcript that backed up the claim that it was a demand. Vindman later stated that Trump was the party with the most power, or "superior," so the "whole thing [call] was a demand asking for a favor." 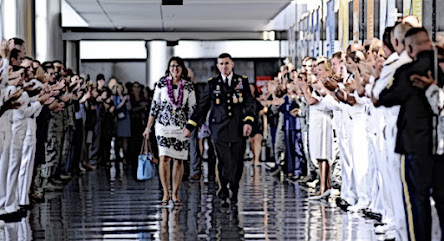 So why did Zelensky say he felt no pressure? Vindman’s testimony comes close to being as much of a fable about the call as was House Intelligence Committee Chairman Adam Schiff’s opening statement before his committee making up what he claimed Trump meant and what Zelensky understood.

Certainly 33-year military veteran Lt. Gen. Michael Flynn was not treated with the same deference when he became the focus of the deep state coup attempting to keep Donald Trump out of the White House. He served his country with genuine honor and distinction  He served both in Iraq and Afghanistan both for the Central Command and the Joint Special Operations Command which included units like Seal Team 6.  President Obama appointed him director of the Defense Intelligence Agency, where he served until he fell out of favor for his criticism of President Obama precipitously withdrawing from Iraq, which created a vacuum the Islamic State rose to fill, with Obama doing nothing as he watched it grow except dismiss it as the “JV team.”

Flynn’s attorney, Sidney Powell, has filed a motion to dismiss the charges against him based on indications that the FBI altered his 302s, essentially written reports based on witness interviews, to make him look guilty, and leaking information on Flynn’s calls to the Washington Post. As reported by RedState:

Powell alleges a set-up of Flynn including that the FBI 302s related to Flynn were edited. A 302 is the form the FBI uses to reflect what a witness says during an interview. Powell’s filing also suggests that Office of Net Assessment’s James Baker illegally leaked the transcripts of Flynn’s calls to David Ignatius of the Washington Post. And Powell is specifically looking for the phone records of James Clapper to see about his contacts with Ignatius, including that he essentially told Ignatius to “take the kill shot on Flynn.”

Powell’s brief alleges that Flynn was essentially railroaded and set up and that the prosecution has withheld exculpatory evidence that should have gotten the case thrown out a long time ago.  As the Federalist reports:

…Powell’s 37-page brief pivots between showcasing the prosecution’s penchant for withholding evidence and exposing significant new evidence the defense team uncovered that establishes a concerted effort to entrap Flynn. Along the way, Powell drops half-a-dozen problems with Flynn’s plea and an equal number of justifications for outright dismissal of the criminal charges against Flynn.

What is most striking, though, is the timeline Powell pieced together from publicly reported text messages withheld from the defense team and excerpts from documents still sealed from public view. The sequence Powell lays out shows that a team of “high-ranking FBI officials orchestrated an ambush-interview of the new president’s National Security Advisor, not for the purpose of discovering any evidence of criminal activity --they already had tapes of all the relevant conversations about which they questioned Mr. Flynn --but for the purpose of trapping him into making statements they could allege as false.”

This is a genuine bombshell involving a plot to overturn an election and one does not have to resort to agenda-driven psychobabble to figure it out. Lt. Gen. Mike Flynn is a war hero who was loyal to the truth, his country and his President. When he is exonerated and asks where he can go to get his reputation back, I would suggest he start at the office of NBC’s Lester Holt.

I wouldn't piss on vindman if the little bitch was on fire.