The Stockdale Paradox and the Modern Left 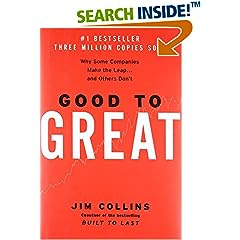 I'm reading a business book called Good To Great . It has absolutely nothing to do with politics. The book is very enlightening. After man-decades of careful research, Jim Collins and his team arrived at a few basic characteristics that distinguish great companies from merely good ones.

How, for example, did Walgreens outperform the market by a factor of fifteen times, while its competitor Eckerd became an industry laggard? How did Kimberly-Clark dominate the master marketers at P&G? And how could Nucor take on -- and soundly defeat -- US Steel? Simple: all exhibited certain traits in its leadership that allowed it to prevail.

So what -- exactly -- allowed companies like Walgreens, Kimberly-Clark, Pitney-Bowes, and Nucor to grow in spectacular fashion?

So, exactly what is the Stockdale Paradox? What trait allowed Stockdale to marshall his charges towards eventual liberation without succumbing to insanity and suicide?

While reading this, I had what could only be termed an epiphany. The modern Left are precisely analagous to Stockdale's "Optimists." Their philosophy: if we ignore the global war on terror, the problem will... go away. Consider, if you will, just a few recent events on the world stage:

1: On show at [Iran's] annual military parade were thousands of troops and a range of hardware including six of Iran's Shahab-3 ballistic missiles, which sported banners saying "Death to America", "We will crush America under our feet" and "Israel must be wiped off the face of the earth".

2: In the first such statement by an Iranian president in nearly 20 years, Mahmood Ahmadinejad said his election would mark what he termed a new Islamic revolution. Ahmadinejad said such a revolution would spread throughout the world... "The era of oppression, hegemonic regimes, tyranny and injustice has reached its end."

3: [Al Qaeda] spokesman, Suleiman Abu Gheith, published an article on the alneda website that claimed: "We have the right to kill four million Americans - 2 million of them children..."

4: A university student from Egypt was ordered held without bond after prosecutors said they found a pilot's uniform, chart of Memphis International Airport and a DVD titled "How an Airline Captain Should Look and Act" in his apartment...

5: Four men, including the head of a radical Islamic prison gang, were indicted on federal charges of plotting terrorist attacks against military facilities, the Israeli Consulate and synagogues in Los Angeles...

6: Iran... resumed its work at the plant near Isfahan, where uranium oxide (called yellowcake) is converted to uranium hexafluoride gas... This gas is the feedstock for centrifuges that enrich uranium to varying degrees: 4 percent for power plants, 20 percent for research reactors and 90 percent or higher for weapons. This was a clear breach of Iran's agreement to suspend "all uranium enrichment related activities"...

The "optimists" don't talk about a nuclear Iran. Nor the fact that Saddam's regime was, for decades, a veritable clearinghouse of terror. They don't mention the extremists' 1996 declaration of war against America and the resulting litany of attacks.

The "optimists" don't dare discuss the changing fabric of the Middle East: Libya disclaiming nuclear weapons and the rising tide of Democracy in Lebanon, Egypt and even Saudi Arabia.

The "optimists" certainly don't state (in public) that Iran is now surrounded by a democratic Afghanistan to the east and a democratic Iraq to the west.

You never hear the Left talk about the implications of a nuclear Iran; a country that has threatened to crush America and wipe Israel off the face of the Earth. You don't hear the Left talk about any credible, long-term solution to religious extremism. In other words, the Left remains simple "optimists", hoping for a fortuitous outcome in spite of the "brutal facts" confronting the United States.

The electorate should know that, unless the Left is willing to confront the "brutal facts" of today's world, it has no business at the levers of power in this country.