This article from KSL in Utah exposes several of the problems with those who are unlawfully present in the United States:

Many at the rally said they would be deported if not for the Deferred Action for Childhood Arrivals program. They urged other so-called “Dreamers” to tell people around them that their lives in the U.S. are threatened, post to social media and call their representatives in Congress.

No one is quite sure yet what Trump is going to do with DACA (though some report he will end it), an executive amnesty program instituted without the approval of the duly elected Legislative branch, that has been referred to as unconstitutional and lawless. 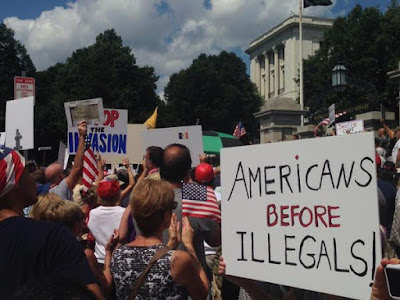 Many Republicans have give Trump till September 5th to make a decision, otherwise they’re taking it to court.

On Thursday, thunderous applause filled the marble rotunda as one young woman fought back tears, saying she was “undocumented, unapologetic and unafraid. I am here to stay.”

Many in the crowd held signs, including some that said “Stop tearing families apart” and “Immigrant rights are human rights.”

Unapologetic despite being present in the United States in contradiction of the law. Essentially telling Americans that they aren’t leaving, despite being lawbreakers. Those are serious problems which turn many people off from the plight of these trespassing aliens who were brought by their parents (supposedly). Instead of being demanding and unapologetic, they should be contrite and holding out their hand, begging to stay.

Then we get to “tearing families apart.” What do they mean? If the kids are deported, the parents would be, as well. Or, do they mean that the parents shouldn’t be deported? We keep hearing that the kids shouldn’t be punished because the parents broke the law. Pro-illegal forces, including the illegals themselves, are admitting the parents knowingly broke federal immigration law. As such, they should be punished for this. And the punishment is deportation. If you admit that you committed a crime, you’d be punished, would you not? Why should illegal aliens be any different? Compassion, you say? What of all the American citizen parents who are separated from their kids, and visa versa, because the former or latter has committed a crime and sent to prison? No one is making the “separated” claim.

Crimes have consequences. Do it the lawful way and there would be no problem.