General David H. Petraeus weighs in on progress in Iraq: 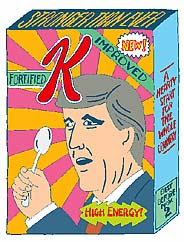 Even the Times is coming down hard on Kerry's tendency to dither, relying upon heavy analysis before decisions are actually made. And the last person to have his ear may, in fact, influence the outcome. Makes you wonder what Theresa Heinz-Kerry's agenda may be...

Former Prime Minister of Spain: Terror Attacks on the Way

Important predictions from someone who's been there.

Former Prime Minister of Spain: Terror Attacks on the Way


How Barney Frank Helped the 9/11 Hijackers

How Barney Frank Helped the 9/11 Hijackers


What's John Kerry been doing for the last 20 years?

Chicago Tribune: Kerry's looking for American failure -- and he's it

Lokisfur: If a man with a gun is pointing it at a cop and he refuses to drop the gun after oh say 14 UN resolutions... and the cop shoots him... and then the cop finds out that the gun was not loaded... does that mean the cop was a liar about the threat. Of course not.

I've got you my pretty!

...And your little dog too!

at 1:43 PM
Email ThisBlogThis!Share to TwitterShare to FacebookShare to Pinterest