In the context of an email conversation, B wrote the following.

First off, I consider myself a Democrat in many ways - in fact, probably on the majority of social issues. I feel Bush has become less fiscally conservative than I think is wise; and has also brought certain faith-based aspects to the office with which I am personally uncomfortable.

But the issue I believe is one thousand times more important than any social issue is this: confronting and defeating extremist Islam. Do you doubt that Mohammad Atta would have detonated nuclear weapons in New York City if he'd had them? Do you doubt that there are other suicidal extremists who are trying -- at this moment -- to acquire small payload nuclear weapons to detonate in our major cities? In fact, their stated goal is to kill 3,000,000 Americans. I, for one, don't doubt that they are trying to make good on that promise.

And please note that my generalizations are not of "Democrats"... they are of the "Democratic leadership". Please note this exact phrasing in this post from July, in which the following Democratic Senators and Representatives met with groups affiliated with terrorists: Nancy Pelosi, Charles Rangel, John Conyers, Nick Joe Rahall, Democratic whip David Bonior, and Gregory Meeks. My article was picked up by DhimmiWatch.com because the very act of meeting with CAIR, in the opinion of many, borders on 'aiding and abetting the enemy' (see Anti-CAIR for more on CAIR's ties to terror groups). And what were they meeting about? Dismantling the Patriot Act.

Also note that almost every claim I make is backed up by 'linkage', attribution in the form of articles, press releases, or other citations. Yesterday's post, with multiple hyperlinks, outlined the Democratic leadership's efforts in the following areas:

1) Calling Iraqi ally Prime Minister Allawi essentially a liar (Investors Business Daily: "by snubbing his Thursday speech to Congress and, as soon as it ended, calling him little better than a liar")
2) Attempting to tear down our alliance with Australia (Captains Quarters: "Kerry Campaign Attempts To Destabilize Australian Partnership")
3) Meeting with groups tied to terrorists, as described above.

and many more. These statements and actions are used by our enemies.

As for John Kerry's voting record... I have many, many posts on this subject, including his statements on the floor of the Senate which do more to illustrate his egregious record throughout his entire career. Are you wondering why the DNC never brings up his Senate record? Because any inspection of it reveals that he has no business running for any public office, much less President.

This post, for example, outlines some of his more outrageous strategic mistakes during his long and refreshingly accomplishment-free career including specific statements and votes (I also have a more complete list I can send you if you're interested).

Again, just to re-emphasize: I am not tarring all Democrats with one broad brush. I am indicting the Democratic leadership, which has hijacked the true spirit of the Democratic party in the interest of greed. How else do you explain insulting our allies, meeting with groups tied to terror, undermining troop morale, and providing talking points for our enemies?

"Just how much damage can Kerry do to the war effort in the 40 days of self-destruction he has left? John Edwards will help make it a record certainly, using the Q word today...

So John Kerry will end his political career as he began it, attacking America's role in a just war, undermining the morale of the troops who are fighting it, and expressing contempt for the leadership of a nation struggling to be free of oppressors. It is the only mark of consistency he's displayed, but not one that many voters will admire."

Allawi told a joint meeting of Congress on Thursday that democratic elections will take place in Iraq in January as scheduled, but Kerry disagreed.

John Kerry's Message to the Enemy

One man's vision of the future. And it ain't pretty.

John Kerry's Message to the Enemy 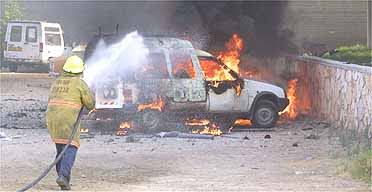 Big news that you might not have caught in the mainstream media. Surprise, surprise.


The Fall of CBS

Excellent timeline that details the exquisite timing of the Democratic National Committee's "Fortune Son" strike with the CBS 60 Minutes II debacle. You would think that forgery, apparent collusion between a network and a political party, and related skulduggery designed to influence a Presidential election would be worthy of some major news coverage, a la Watergate. Aside from Fox, it appears, you'd be wrong. And they say there is no media bias. Uhmm hmmm.

PoliPundit's Quote of the Day

Also Heard around the Web

"While Mr. Kerry has every right to criticize U.S. conduct of the war, one would think he'd be wiser than to attack Mr. Allawi for saying it will be possible to hold the same elections that Mr. Kerry said just this Monday were his own exit strategy from Iraq. Or to accuse Iraq's Prime Minister of painting an unrealistic picture about a country the Senator has never visited. Having described the U.S. allies who liberated Iraq as a "coalition of the bribed," Mr. Kerry now insults the Iraqis he'd be working with if he becomes President."

- OpinionJournal
at 8:24 AM
Email ThisBlogThis!Share to TwitterShare to FacebookShare to Pinterest