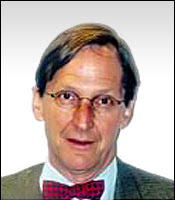 There are certain columnists who consistently deserve an appellation. Consider, for example, "The Great" Mark Steyn, columnist for the National Review, New Criterion, Spectator, Daily Telegraph, etc. Steyn's continued brilliance is deservedly highlighted on a regular basis by seasoned observers like Hugh Hewitt and New Sisyphus.

Boston Globe columnist Thomas Oliphant (he of the annoying, "heh-heh-heh-heh" laugh) visited the Imus show this morning and lived up to his longstanding prefix, "Ignorant". And if you think I'm being cruel about his laugh, don't worry, it was openly mocked on the program by, if you can believe it, Camilla Parker-Bowles. Or maybe that was an impersonator, I'm not sure. In any event, his comments have defined a high-water mark for ignorance. Allow me to describe what kind of garbage he dispensed this morning.

Of his major diatribes this morning, Oliphant first asserted that the administration's Iraq policy had made allies of Iran and Syria. Ruminate on that statement for a moment: audacious and moronic, no?

Consider what Geostrategy-Direct has said about the terrorist group Hezbollah, for instance:

In fact, a Google search for "iran hezbollah syria yields a paltry 144,000 results. Only someone with partisan blinders on... or completely ignorant... or both would posit that Iran and Syria have been brought together by the Iraq war when Hezbollah is living, breathing proof of a decades-long alliance.

Not ignorant enough for you? Well, Thomas Oliphant is out to prove he can do even better. He next asserted that the administration's stance on Iran (e.g., espousing freedom for the Iranians in the State of the Union speech), was encouraging the Mullahs to crack down on the reformers.

Natan Sharansky, on the other hand, a man who suffered for years in a Soviet Gulag believes exactly the opposite: namely that endorsing freedom emboldens the enslaved and disheartens the oppressors:

Come to think of it, Oliphant was consistently wrong about Reagan, too. Pentagon advisor Richard Perle recently said that the president's speech, "caused elation among dissidents in Iran."

But perhaps Tom, whose most painful recent experience probably involved a hangnail while waiting in line at Starbucks Martha's Vineyard, understands better than Sharansky the mindset of Iranian dissidents.

Oliphant is a man who probably isn't smart enough to know intellectual honesty if it hit him in the head with a two-by-four. Either that, or he is a serial prevaricator with a proclivity for mouthing untruths like a Pez dispenser.

In any event, it is entirely deserving to affix "the Ignorant" to his name from this point forward.

at 1:02 PM
Email ThisBlogThis!Share to TwitterShare to FacebookShare to Pinterest