BOOK: Biden got his job as U.S. Senator with help from a Mafia hit-man 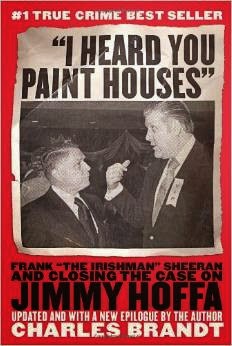 The book I Heard You Paint Houses came out in 2003, so it’s been gathering some dust on a number of bookshelves around the country for quite some time.

The book’s title, according to Amazon, comes from the first words infamous Teamster boss Jimmy Hoffa ever spoke to Frank “the Irishman” Sheeran. To paint a house is to kill a man. The paint is the blood that splatters on the walls and floors.

The book is essentially the deathbed biography of one-time Delaware Teamster boss and mob hit-man Frank Sheeran and truly is a fascinating read.

[Spoiler alert: Before he died, Sheeran claimed to be the one who killed his friend and mentor, Jimmy Hoffa--whose body was apparently later cremated.]

Despite the book purportedly being made into a movie called The Irishman, starring Robert De Niro , Al Pacino , Joe Pesci, as well as directed by Martin Scorcese, it has not been released yet.

While the book has been out for some time, it wasn’t until last night, during Joe Biden’s prime time speech, that I was reminded of some of the books contents, most notably this piece that appeared in the Orange County Register a few weeks ago:

One additional item relates to Biden’s integrity. In the fascinating biography of Teamsters and Mafia hit-man Frank Sheeran, “I Heard You Paint Houses,” the lifelong thug describes a favor he performed while he was president of Teamsters Local 326 in Wilmington, Delaware.

In 1972 Sheeran received a visit from “a very prominent lawyer” he knew who was “very big in the Democratic Party” in Delaware. The November general election was approaching, and the race for the U.S. Senate seat held by a Republican was expected to be close. The lawyer wanted help in preventing the distribution of a paid Republican political ad – an insert in the Delaware-wide newspapers – that would run for a week and expose the campaign misrepresentations by the Democratic challenger. Sheeran promised the operative that he “would hire some people and put them on the picket line.” He added, “People nobody would mess with.”

The picket line went up, the papers were not delivered all week, and, as Sheeran said, “The day after the election the informational picket line came down, and the newspaper went back to normal and Delaware had a new United States Senator.” His name was Joe Biden. Thereafter, said admitted extortionist, thief and murderer Sheeran, of Biden, “You could reach out for him, and he would listen.” [Emphasis added.]

So, there you have it. The Vice President of the United States got his job as U.S. Senator with help from a Mafia hit-man and Delaware Teamster boss. No wonder Barack Obama keeps Joe as his running mate.

Joe "Knuckles" Biden. Has a ring to it.

Think there's maybe 12 politicians out there, that aren't whores?

"Yo,Joey..I want youse should be a US Senator..youse got a problem with dat?"