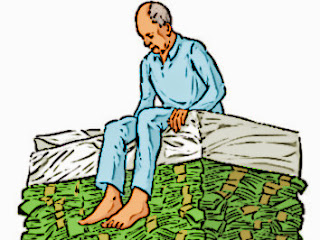 Despite arguments to the contrary from the Obama administration, mounting evidence suggests that the U.S. economy is rapidly falling back into negative growth territory. More Americans are out of the workforce than ever before, median household incomes are at levels not seen since 1967, and consumer spending is coming to a veritable standstill. The crisis is apparently so significant that a Federal Reserve governor recently said U.S. policymakers are crafting regulations that will force bank depositors to cover any losses should their financial institutions fail.

The question that many are asking is, how did this happen? How, after six years of recovery efforts and trillions of dollars printed, is it possible that the economy is not booming again?

This week the Federal Reserve published a report that claims to have figured it out and it turns out that the renewed economic downturn has nothing to do with foreign outsourcing, high taxation, increased health care costs for business or rising consumer prices for food and energy.

No, according to the Fed it is your fault. Apparently, you are not spending enough money. In order for the economy to recover you need to stop hoarding cash now and get out there and start buying more homes, cars, vacations, and electronics. Otherwise, you’ll only have yourself to blame when the system comes unhinged.

From the St. Louis Federal Reserve:

The issue has to do with the velocity of money, which has never been constant, as can be seen in the figure below . If for some reason the money velocity declines rapidly during an expansionary monetary policy period, it can offset the increase in money supply and even lead to deflation instead of inflation.

During the first and second quarters of 2014, the velocity of the monetary base2 was at 4.4, its slowest pace on record. This means that every dollar in the monetary base was spent only 4.4 times in the economy during the past year, down from 17.2 just prior to the recession. This implies that the unprecedented monetary base increase driven by the Fed’s large money injections through its large-scale asset purchase programs has failed to cause at least a one-for-one proportional increase in nominal GDP. Thus, it is precisely the sharp decline in velocity that has offset the sharp increase in money supply, leading to the almost no change in nominal GDP

So why did the monetary base increase not cause a proportionate increase in either the general price level or GDP?

The answer lies in the private sector’s dramatic increase in their willingness to hoard money instead of spend it. Such an unprecedented increase in money demand has slowed down the velocity of money

Top tier economists, it seems, are unable grasp why consumers have decided to hoard – in other words, save – their money even though the central bank is engaged in an unprecedented monetary expansion.

The answer is simple, really, and you don’t need to look at detailed government charts and statistics to figure it out.

American consumers have been absolutely pummeled over the last decade.

We are losing so many jobs that newly created minimum wage jobs touted by the Obama administration aren’t even making a dent.

Moreover, the price of food, electricity, gas and other essentials have risen so sharply that we’re paying nearly double for those items today than we did a decade ago.

And, as recently noted by The Economic Collapse Blog, over 77 million Americans currently have debt collection accounts and 25% of Americans have absolutely no emergency cash whatsoever.

It’s not so much that Americans are “hoarding” money, a phrase that suggests greedy people all over the country are stacking piles of cash under their mattresses. It’s that most Americans don’t have any money left to spend.

The Daily Bell says that the Federal Reserve and the U.S. government are now creating a new narrative to be spewed by their mainstream media propaganda arms, wherein the blame for this will fall squarely on the American people:

Sometimes Federal Reserve white papers attract attention and this one does because of the term “hoarding money.” This is a startling phrase and – who knows – perhaps it marks the beginning of a new meme.

Certainly the word “hoarding” is a popular one with government officials. When governments are uncomfortable with the actions of citizens for whatever reason, the term “hoarding” is often applied to stigmatize certain behaviors and encourage others.

This isn’t the first time government officials and their quasi-government counterparts have targeted “hoarders” as evil doers. They have done it before and the evidence suggests they are going to do it again as soon as the right crisis takes hold.

In 2012 President Obama signed a an Executive Doomsday Order that was designed specifically to target “hoarders” during a national emergency:

While millions of people have been preparing for the possibility of a catastrophic event by relocating to rural homesteads or farms, as well as stockpiling food, water, personal defense armaments and other essential supplies with the intention of utilizing these preparations if the worst happens, the latest executive order signed by President Obama on March 16, 2012 makes clear that in the event of a nationally deemed emergency all of these resources will fall under the authority of the United States government.

But what is hoarding? According to David Spero of Code Green Prep, it’s whatever they say it is. Right now, tens of millions of Americans are unable to put food on the table or pay their most basic expenses, yet the Federal Reserve claims that we’re hoarding money. In an emergency, they’ll make similar claims.

Hoarding of Just About Anything Can Be Banned

These definitions are written in to the 1950 War and National Defense Defense (sic) Production Act, and so let’s see what the act itself has to say for itself.

Go directly to section 2072. That’s the key part from our perspective.

In order to prevent hoarding, no person shall accumulate (1) in excess of the reasonable demands of business, personal, or home consumption, or (2) for the purpose of resale at prices in excess of prevailing market prices, materials which have been designated by the President asscarce materials or materials the supply of which would be threatened by such accumulation. The President shall order published in the Federal Register, and in such other manner as he may deem appropriate, every designation of materials the accumulation of which is unlawful and any withdrawal of such designation.

So the President can simply say that anything more than (for example) a week’s supply of food (and all the other things listed) is an amount ‘in excess of the reasonable demands of personal consumption’ and then order the Army to impound everything you have in excess of that amount.

Now, as we face a crisis in America on a scale never before seen, the government is attempting to change the story. In the end, when the worst of it hits and people start rioting in the streets because they can’t afford food or shelter, they’ll turn the blame on the “hoarders” who have selfishly saved cash and precious metals, stored long-term foods for an emergency, and prepared to deal with the very situation the politicians, central bankers and business elite have created.

Once the meme is pushed in earnest across the media networks, it will only be a matter of time before the crowds turn their attention to those greedy hoarders who ’caused this crisis in the first place.’

Those who hoard resources illegally will have their supplies seized and will likely be detained for actions akin to terrorism, while those who see something and say something will be rewarded with a cut of the booty.

This may sound outlandish, until you consider that this is how all tyrants and authoritarian governments have operated since the beginning of human civilization.

Hoarders beware. They’ll be coming for you.

So the Fed wants people to stop hoarding money. While THEY in turn are bleeding us to literal DEATH (didn't George Soros say a while back that that was EXACTLY the plan?)
This is not Obamas train wreck it is the Fed's and Bush did their bidding as well as clinton, bush 1, Reagan and every president since 1913 except Coolidge.
Hang on, we are in for a ride.
Remember their solution has always been war.

Part of the reason many Americans have cut back their spending is because of the low interest rates. Savers are suffering from these low interest rates. The leading edge of the massive Boomer generation knows that every dollar spent is a dollar it cannot re-earn or replenish. The logical thing to do is hoard their wealth. Boomers have little choice but to, keep the car for an extra 50,000 miles, cancel remodeling projects, and make the grand-kids fund their own education. With less interest income they are purchasing a lot fewer electronic gadgets and spending vacations in the backyard. As a result of these low interest rates this "recovery" may be greatly delayed. More on the subject of how lower interest rates have a hidden cost in the article below.

But....Why would people hoard their money, knowing how desperately everybody else needs it??

The pre-WWII Germans called it 'hamstering',but I guess that sounds too cute to upset malleable people about those who dare to look out for themselves.Maybe those who prepare for the possible future should call it 'grizzly bearing' as a warning to those who would seek to commandeer their supplies.

They can blame anyone they want, but it shows how clueless the FED actually is, or they are outright lying to us. The instability generated by the fed and their accomplices, foreign central banks have just about run out of room to keep expanding the money supply before war breaks out. IF you want peace then cut the money supply and quit funding the debt. The only way out is to cut government by 90% on both spending and taxation and regulations. Now I am not naive enough to think government will give up willingly, especially with marxist(s) in the whitehouse. So it will apparently be a war. The fed is over leveraged by about 9000% and cannot go back without really being careful. The FED can be bailed out by government but you will have to have allow people to be able to work for their happiness which really chaps the FED and our communists to no end. The real question is if we have a war, who will it be on, bankers and the FED is one possibility. There are many, but communism always kills everyone sooner or later. Being a favorite is so fickle. Do you really want to think it can't happen?