Former Chicago Alderman, and now 11-term Congressman Luis V. Gutierrez (D. 4th Dist. IL) is described by one news outlet as a “59-year-old Illinois congressman [who] stands 5 feet 6 inches tall, which is only one reason he got his nickname, “El Gallito” — the little fighting rooster.” 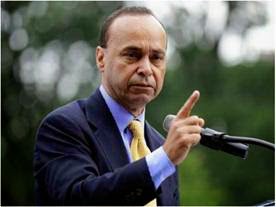 As immigration chairman for the House Hispanic caucus, Gutierrez is fighting hard for a Presidential Executive Order granting amnesty to as many as 5 million illegal immigrants.

He says, ““When I see those children, I see my own daughter. I can’t help but see that. I see my nieces and nephews."

Gutierrez’s reputation in Chicagoland’s politics is not untarnished.  There’s that sweetheart deal he got from Tony Rezko in the purchase of a condo for his daughter.  There’s the $500,000 plus he paid in taxpayer money over 10 years to a Chicago lobbyist to advise his congressional staff.  And, the 2004 allegation that Gutierrez lobbied Mayor Daley for a residential development owned by a man who loaned Luis $200,000.   The developer was later federally indicted concerning the same development.

But forget all that – that’s all in the past.

Today, Gutierrez is firmly ensconced in one of the most gerrymandered congressional districts in America.  You need a GPS to find its boundaries.

Gutierrez won his last seven general elections with an average of 81% of the votes cast.

If Gutierrez repeatedly wins so handily over un- and under-funded candidates, why does he continue to aggressively raise campaign money every cycle?

FEC filings for the last two election cycles (2014 is incomplete) indicate that Gutierrez For Congress paid out, over those three-and-a-half years, $173,879 for the position of “Office Manager, Treasurer and Fundraising” for his campaign.

That expenditure represents over 33% of the total campaign donations raised during 42 months into the 2014 cycle.

The “Payee Name” listed on the FEC filings as having received payment as “Office Manager, Treasurer and Fundraising” is Soraida Gutierrez – also known as Mrs. Luis Gutierrez.

As an aside, the last alphabetical entry in the campaign expenditures filed during the first half of 2013 (Transaction D42169) reported $5,300 for “Yates, 230 E. Center Drive, Vernon Hills, IL, 60061.”  The “Purpose of the Expenditure” is indicated as “reimbursed charged to wrong account.”  Dr. William D. Yates, M.D. runs the Yates Hair Science Group clinic at that address. 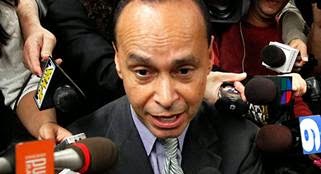 Here are the top contributing PACs (with the exception of individual contributions from Cantu Construction – a major bundler for Hillary in 2008 in SE Texas) to Gutierrez’s 2014 campaign to date (source: OpenSecrets.org):

Omaira Figueroa, Luis and Soraida Gutierrez’s daughter, is the “Treasurer.”

Here are some significant contributors to New Americans Fund in the 2012 cycle:

On November 18, 2013, the New Americans Fund changed its name to Immigration Reform Fund (IRF).  The committee persons and the mailing address remained the same.

Here is a list of leading IRF contributors in the 2014 cycle:

Obviously, the bulk of money – about $167,415.06 – collected through the two fundraising efforts awaits disbursement. But for what purpose does it wait?

El Gallito is this year’s most passionate, high-profile, congressional advocate for amnesty for Hispanic illegal immigrants.

The motive of many contributors, individuals, and PACs, is clearly simpatico with those Gutierrez expresses – loudly and often.

The motive prompting large corporations to contribute to Gutierrez is less clear. But then many are prone to spread money across the political, ideological spectrum – hedging their bets.

In Gutierrez’s case, the fact that there’s job security to be gained through aggressive, pro-illegal immigrant fundraising, as well as enhanced family assets, is, of course, merely an unintended consequence of his heart-felt compassion. 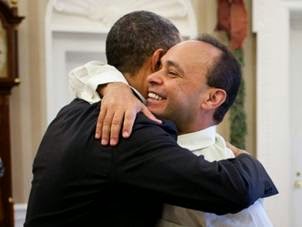 Chicago is a city of sleaze and graft. It's been that way since long before anyone reading this was born. Why else do you think our Dear Leader chose to start his political career there?

Gutierrez is just another you-know-what that floated to the top in Chicago, cesspool of the midwest.

Luis "the little fighting cock" has a connection to Jose Angel Gutierrez who said, "We have an aging white America. They are not making babies. They are dying. The explosion is in our population... I love it. They are shitting in their pants with fear, I love it. We have got to eliminate the gringo, and what I mean by that is that if the worst comes to the worst, we have got to kill him.
Professor Angel "make my day" Gutierrez University of Texas