For the terrorist group known as the Islamic State, Syria and Iraq were a good place to start their campaign, but in order to survive and prosper it knew from the outset that it had no choice but to set its sights on the ultimate prize: the oil fields of Saudi Arabia.

It is in that direction that the battle for control of the world's largest oil fields is currently heading. 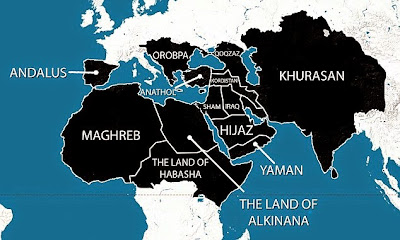 Islamic State -- which has its origins in al-Qaeda – knows fully well that in order to sustain itself as a viable and lasting religious, political, economic and military entity in the region, it has to follow the same objectives established by al-Qaeda when Osama bin Laden broke off his relations with the Saudi monarchy and vowed to bring down the House of Saud.

Bin Laden's ire at the Saudi monarchy stemmed from the fact that Saudi King Fahd bin Abdulaziz Al Saud invited the American military to use Saudi Arabia as a staging area to build up forces to take on the then Iraqi leader Saddam Hussein after Iraqi troops occupied Kuwait in August of 1990. Bin Laden objected to the presence of "infidels" in the land of the two holy mosques, and asked the king to allow his outfit to tackle Saddam Hussein's troops.

Similarly, IS knows that it will only feel secure once Saudi Arabia is part of the Caliphate, and its oil fields are under IS control -- which is why the group has two logical next steps.

First, to capture and secure the most important country in the Muslim world: Saudi Arabia.

If the battle for Syria and Iraq attracted tens of hundreds, (some say tens of thousands) of young Muslims, the battle for control of Islam's two holiest sites, Mecca and Medina, are very likely to attract many more fighters into the ranks of the Islamic State.

And second, to take on the United States -- the one remaining superpower that could stop its march on the oilfields of Saudi Arabia, and ultimately the rest of the Gulf.

After much hesitation, it now appears that the Obama administration has come around to realizing the true danger posed by IS. Washington, along with some of its NATO allies, is now formulating a plan to defeat IS.

However, it may be wise to point out that Washington's track record in dealing with Middle East problems has not been something to crow about. As a point of reference, one need only mention Iraq and Afghanistan -- both prime examples of how not to do things.

Even if the U.S. can defeat IS militarily, any victory would only be temporary since eventually, U.S. troops will pull out and the remnants of IS would emerge from their respective hiding places, as they did after Saddam Hussein's capture and death. Indeed, a U.S. intervention -- through its massive air campaign -- will foment even greater animosity toward the West in general, and the United States, in particular. It's all deja vu.

The one power that can effectively move against IS in a manner that would appear legitimate to other Muslims is Saudi Arabia, as Nawaf Obaid, a fellow at Harvard University's Belfer Center for Science and International Affairs, and Saud al-Sarhan, research director at the King Faisal Center for Research and Islamic Studies pointed out in a joint opinion piece published Sept. 9 in the New York Times.

The authors dispute the widely believed notion that Saudi Arabia created IS and is funding it. "Saudi Arabia is not the source of ISIS -- it's the group's primary target," they write.

As Obaid and al-Sarhan put it, "The Saudi leadership has a unique form of religious credibility and legitimacy, which will make it far more effective than other governments at delegitimizing ISIS's monstrous terrorist ideology."

What makes IS powerful today is the fact that they laid out their military strategy based on where oil fields are located. The fact that they went after northeast Syria and northern Iraq is not coincidental by any means. Islamic State may be ruthless and brutal, but it is first and foremost a terrorist organization with an astute business plan.

The capture of oil wells in Syria and Iraq has made the group financially self-sufficient. Now it's all or nothing.

If we move to destroy them, they'll hate us even more???

What's the point of spending 100s of BILLIONS to have the strongest military in the world if our faggot CIC and his muslim sympathizers won't use it to fulfill their #1 Constitutional obligation?

HE and Jarrett and a couple dozen others should be swinging from lamp posts.

All it would take would be a dozen Blackhawks landing on the WH lawn and arresting these traitors.

It's another reason Obama is gutting the military and filling it with homos.
MM