JUST IN TIME FOR 9/11: ISIS calls for assassinations of Twitter employees in San Francisco and Europe

An ISIS-related Twitter account has issued the group’s first direct call for attacks on specific American targets, but it’s not going after political or national icons. It wants Twitter employees assassinated. The call for retribution against the online platform was first announced Sunday night in a series of tweets asking “lone wolves” in the U.S. and Europe to make Twitter employees the focus of their attacks.

Twitter has been engaged in a prolonged game of whack-a-mole with ISIS, closing its accounts and those of similar organizations as they come to prominence, in an attempt to stifle their extremist propaganda and exhortations to violence. ISIS and other groups have consistently thwarted these efforts, now they’re going one step further, urging “lone wolf” actors to target Twitter employees.

The series of ISIS tweets are below, translated one by one. 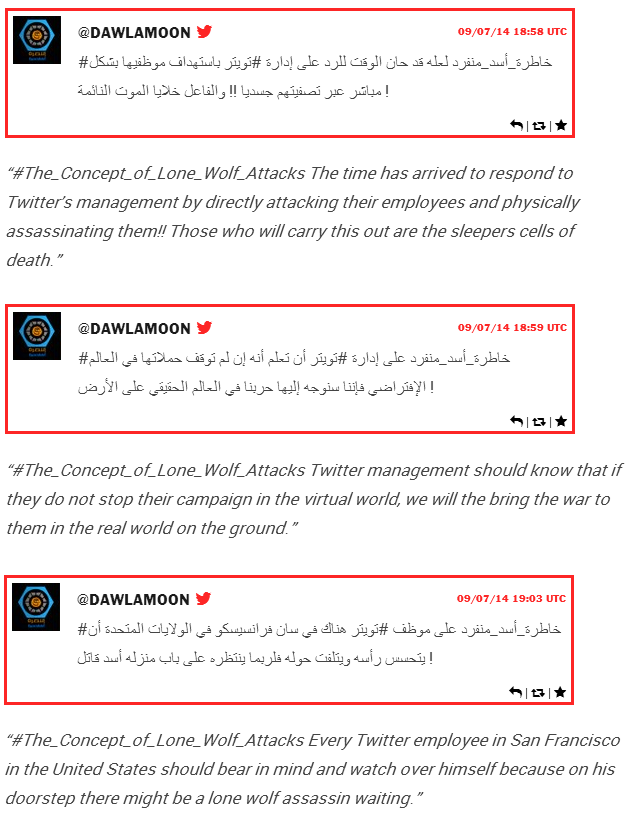 You can read the entire piece here.

And, by all means, if you Twitter employees are legally able to carry concealed, do so. Though this being the People's Republik of California we're talking about, I suspect said licenses are harder to find than Michael Moore at a Gold's Gym.

too bad the twitter nerds are all in california. they are unarmed and untrained and will have no defense if the bad guys come after them except to dial 911...

Let's get Canada and Mexico involved to help implement policy against these terrorists, this is intolerable but manageable. After any wrongdoing, these goat herders must be read their rights by the bughead Eric Holder hisself.

Maybe radical Islamists whacking a few Twitter employees here and there is what it will take for liberal zombies to wake the @#$% up.