MOST TRANSPARENT ADMINISTRATION EVER: Why, President Obama Never Referred to ISIS as the "JV" Team

The new Obama meme on ISIS: the President never referred to it as the "JV" team. 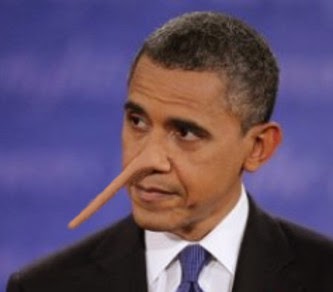 Todd, Sept. 7: Long way, long way from when you described them as a JV team.

Todd: Was that bad intelligence or your misjudgment?

Obama: Keep — keep — keep in mind I wasn’t specifically referring to ISIL. I’ve said that, regionally, there were a whole series of organizations that were focused primarily locally.

In fact, that's another entry in Obama's impressive database of fabrications, though not nearly as significant as "If you like your plan, you can keep your plan" or "The average family will see their health care premiums drop by $2,500 a year".

In reality, Obama clearly made such a claim during an interview with David Remnick of The New Yorker that occurred immediately after ISIS had captured Fallujah.

...In the 2012 campaign, Obama spoke not only of killing Osama bin Laden; he also said that Al Qaeda had been “decimated.” I pointed out that the flag of Al Qaeda is now flying in Falluja, in Iraq, and among various rebel factions in Syria; Al Qaeda has asserted a presence in parts of Africa, too.

“The analogy we use around here sometimes, and I think is accurate, is if a jayvee team puts on Lakers uniforms that doesn’t make them Kobe Bryant,” Obama said, resorting to an uncharacteristically flip analogy. “I think there is a distinction between the capacity and reach of a bin Laden and a network that is actively planning major terrorist plots against the homeland versus jihadists who are engaged in various local power struggles and disputes, often sectarian.

“Let’s just keep in mind, Falluja is a profoundly conservative Sunni city in a country that, independent of anything we do, is deeply divided along sectarian lines. And how we think about terrorism has to be defined and specific enough that it doesn’t lead us to think that any horrible actions that take place around the world that are motivated in part by an extremist Islamic ideology are a direct threat to us or something that we have to wade into.”

Even the toadies at the DNC press release outlet known as the Washington Post had to grudgingly admit that the White House lying (again), awarding the administration's spin its coveted "Four Pinocchios award.

What's next? Every hard drive containing text, audio or video of his infamous statement simultaneously "crashes" courtesy of the NSA?

And just a postscript: if this administration is willing to lie about this, what won't it lie about?

So Barry takes the weasel's way out, hiding behind the cover of "Nations" to address the butchery of our citizens.
As pointed out on Hannity today the Halfrican's use of isil is a slap at Israel as well.
It's a proud moment for America isn't it?

That is why this administration (including the state department ) refer to this murderous group as ISIL and not ISIS. If they did they would be admiring that this group is in an comes from Syria and would be obliged to attack ISIS in that state, something they will not do.