PHOTO: Guess what happens to a Syrian fighter jet about three seconds after it crosses into Israeli airspace?

Can you say, "instant fireball"?

Israel said that the jet - identified as a Russian-made Sukhoi Su-24 - had crossed the battle lines of Syria's civil war and flew over its Golan Heights territory, perhaps by accident.

The incident coincided with but did not appear to be directly related to air strikes the United States and Gulf Arab allies mounted on Islamic State strongholds in Syria. 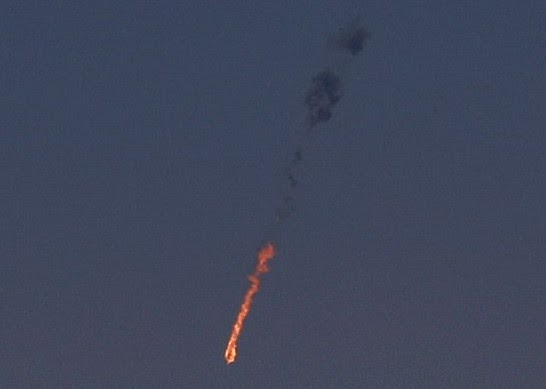 But it presented another challenge to Israel's oft-stateddesire to stay on the sidelines of a conflict on its northerndoorstep, in which al Qaeda-linked Nusra Front rebels took overa border crossing on the Golan last month.

The Israeli military said its U.S.-made Patriot missile air defence system shot down a Syrian Russian-built Sukhoi fighter plane that had 'infiltrated Israeli airspace' over the territory, captured by Israel in the 1967 Middle East war.

It was the first time in three decades that Israel had downed a Syrian warplane.

It's another historic Obama first!

To watch Jordan, Egypt, Saudi Arabia line up as temporary friends of Israel is amazing to say the least.. Not as much a Obama policy as it is a Military policy that Obama is naive to.. (Fly Paper) policy its called. Give both sides guns and who ever else wants them. and sit back watch them kill themselves off taking the most extreme with them. The only problem i for see is Obama dropping bombs when it really not needed. ISIS will end up in Turkey and Jordan before its all over.