It was Tuesday, September 19th, 1989, Ginny and I were living in a small condo overlooking the Atlantic Ocean in Wild Dunes, a resort on the Isle of Palms, SC.

It really was paradise. We were living there temporarily since we had sold our house in West Virginia, and we were deciding on where our future would be. I was consulting and had been doing extensive travel in the South with a few clients. I was scheduled next week for a final job interview with a major insurance company and Ginny was starting a new job in nursing the next Monday.

I was leaving that morning on a business trip. I arose about 4:30 AM to do my stretching prior to my morning run and was watching the Weather Channel and the weather map. Far out in the Atlantic was a circular red dot designated as Hurricane Hugo. It was many hundreds of miles out at sea so its destination was undetermined.

While watching, I got a strange premonition and wakened Ginny. I told her, ”I have this feeling that this hurricane is going to hit Charleston --- and you and I are leaving.”

Her sleepy response was “Oh, Chicken Little... the sky is falling... let me go back to sleep.”

Nevertheless, I told her to pack for three or four days; to take the family photos, archives and videotapes; and we began to secure our ocean front condo. After those preparations for the hurricane, we moved Ginny’s car to a friends’ house in Mt. Pleasant and drove to Greenville, SC, where I had a client meeting. 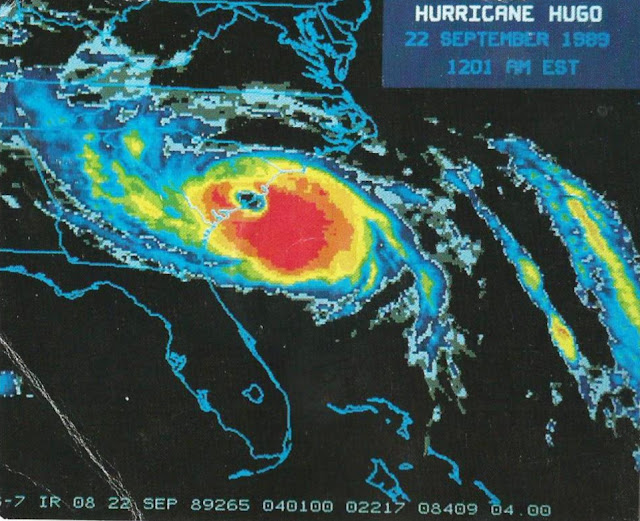 We then drove to Atlanta for an industry trade show, where I had some assignments from clients.

On Wednesday, Charleston and the coastal cities began to evacuate.

On Thursday night, September 21st, America watched in horror as Hurricane Hugo hit Charleston. It crashed ashore at midnight, at high tide, throwing the full brunt of a Class 4 Hurricane on the low country.

Winds of over 130 mph and an 18-foot wall of water hit the Isle of Palms and devastated the coastal area.

TV broadcasting went out for a few hours because of the storm. We awakened the next morning in shock as the full realization of the storm impact became apparent. Many of the trade show participants and visitors were from South Carolina, so the show quickly ended and visitors scattered.

We learned that the Governor had declared Martial Law on the barrier islands because bridges were out, there were reports of looting and the islands were snake infested. We saw on TV that the only bridge to the Isle of Palms had been destroyed.

That morning, we left Atlanta driving north on I-85. As I drove, I said to Ginny, "I have no idea where we are going... do you realize that we are homeless?”

We had sold our house in West Virginia, and could not return to Wild Dunes.

As we approached Greenville, SC, unsure of a destination, I reached out to friends in Greenville, SC, who answered by saying, ”we’ve been waiting to hear from you…come stay with us”. And we did... for over three weeks.

The hurricane continued to wreak havoc on the Southeast and Mid-Atlantic states. It finally died out four days later after leaving a path of destrucdtion from South Carolina to West Virginia.

Because of martial law on the barrier islands -- which included the Isle of Palms -- it was two weeks before we could return to our home. In the meantime, the Governor of South Carolina had wisely chosen to fly the entire coastline in a helicopter videotaping the worst damange.

Homeowners who had evacuated were able to get a general idea of how much destruction had occurred and if their property might have been damaged or spared. We were able to see that our property was thankfully intact with the roof still intact.

We drove to Charleston and parked with thousands of others in a lot near the harbor. We were ferried by boats to the end of Sullivan’s Island and then bused to various stops on the two islands.

We were allowed two bags to reclaim any possessions and one hour to do so.

The bus trip was traumatic.

While we had seen the damage from aerial photos and on TV, nothing prepared us for reality.

The erratic pattern of the hurricane left one house intact, another partially damaged and the next one with nothing left but the foundation. There were houses in the road and in the yacht basin, boats were stacked over seven-high.

We were fortunate. While all of the windows in our third-floor condo had imploded, our roof had remained.

And our upstairs “closet”, with all of our clothing, was intact and dry.

The floor of the condo was covered with layers of broken glass, ceiling insulation and... our possessions.

Since it had rained for weeks, we had over 18 inches of water in our unit. We reclaimed what we could, shed a tear or two, then left with what we could carry ---- including my damaged 12-string Gibson Guitar, which had rusted, corroded and warped.

After staying with our friends in Greenville, we moved into the Residence Inn in Greenville. We lived there for over three months while deciding our future.

Several of my consulting clients were no longer in existence because of the hurricane.

After some networking, I accepted an consulting assignment with a apparel company in Atlanta and we moved there into an apartment in the Northlake area.

In the meantime, because I had been president of our condo association, I had to return to Wild Dunes for insurance meetings every month for 14 months.

And... instead of getting better, things got worse.

Put simply, any property that had water exposure was rotted, corroded, rusted, mildewed or moldy... and damaged.

Furniture was placed on the side of the roads, vegetation was rotting from salt water exposure, construction crews were everywhere. It was hard to find a place to stay. On one trip, I was crossing over the old bridge in Charleston and traffic was completely stopped.

I had a CB radio, turned it on, and discovered that a woman living in Wild Dunes for months without any services had become so depressed that she had driven to the bridge, parked her car at the top and jumped.

Some 30 or 40 people died in the hurricane, and the damage was in the billions.

I wanted to write this story because while we lost our home and the event created trauma in our lives, we were very, very lucky. We were safe and healthy, our family archives were saved and the stuff we lost was replaceable.

The people in Houston and East Texas will be suffering for years. Almost every home or building will have to be rebuilt and restored.

I urge you to donate to your favorite charity …..The Red Cross, Salvation Army, Feed the Children or any charity approved by “Charity Navigator”. These are our people and they need our help.

Until you've been through one, the force of a hurricane is hard to imagine. Around here, the small rural bridges took many years to be replaced after Camille...

Camille caused tremendous damage in its wake, and also produced a peak official storm surge of 24 feet (7.3 m). The hurricane flattened nearly everything along the coast of the U.S. state of Mississippi and caused additional flooding and deaths inland while crossing the Appalachian Mountains of Virginia. In total, Camille killed 259 people and caused $1.42 billion (1969 USD, equivalent to $9.27 billion 2016 USD[2]) in damages. To date, a complete understanding of the reasons for the system's power, extremely rapid intensification over open water and strength at landfall has not been achieved.
----------------------
It struck in the foothills of the Blue Ridge at night, without warning. I'm told that back then Virginians (aside from the coast) didn't pay much attention to hurricanes. They certainly do now, though. Those that lived, anyway.
----------------------

A widespread area of western and central Virginia received over 8 inches (200 mm) of rain from Camille's remains, leading to significant flooding across the state. A total of 153 people lost their lives from blunt trauma sustained during mountain slides, related to the flash flooding, not drowning.[28] More than 123 of these deaths, including 21 members of one family, the Huffmans, were in Nelson County. Debris avalanches occurred on hillsides with a slope greater than 35 percent.[28] In Nelson County, the number of deaths amounted to over one percent of the county's population.[29] The worst of the damage was reported in Massies Mill, Woods Mill, Roseland, Bryant, Tyro, Montebello, Lovingston, Norwood, Rockfish, and along the Davis and Muddy creeks.[28] The James and Tye rivers crested well above flood stage in many areas, including a record high of 41.3 feet (12.6 m) at Columbia, Virginia. Hurricane Camille caused more than $140 million of damage (1969 dollars) in Virginia.[4][5] Camille was considered one of the worst natural disasters in central Virginia's recorded history.[28]

People in Houston have been very, very disappointed in the Red Cross response. You might consider donating to J.J. Watt's YouCaring campaign for Houston instead.

I work in Emergency Management and I can tell you, first hand, that the Red Cross is a scam. Period.

Money flows to them while they do nothing more than take their cut of the profits and outsource to others to do actual help and then brag about how much they are the ones who are helping.

While those others are doing the actual work, they appear for photo-ops and they use the lying media to beg for more money.

Again, it's a scam and nobody should give them any money.