Thanks to a reco from "B", I just added Hard-core Zen to my Amazon wish-list. Hint-hint. You can't help but like the email that he sent me:

"I came across this at the library. I'm not sure how much you've studied Zen, but this book was one of the most accessible I've read (if you can call Zen 'accessible'). It was written by an Ohio native that is about our age. He was in a couple punk bands and then moved to Japan to work in Godzilla movies. Long story short...he's now a Zen master."

Fair enough. So I read a little bit more about Brad... let's just put it this way, anyone who writes a book about his belief system and includes a chapter entitled "In My Next Life I Want to Come Back as a Pair of Lucy Liu's Panties" -- well, at the very minimum, he deserves our attention.

First, I received this email:

Sent: Sunday, February 22, 2004 11:23 AM
Subject: John Kerry's War Record ?
>
>
>I personally know: a .50 will shatter a large Vietnamese tombstone and what it does to a human is not for dinner table conversation, medals seldom given except to cover an other wise courts martial decision, of no one wounded three times with out grievous injury, of no one sent out of country who could return to duty. Putting your craft and crew in jeopardy without mitigating reason has always been a courts martial offense in the naval service. Sounds like he wanted to be a JFK reincarnate and used his wealthy connected pull to get home. I hope we hear from some of his old crew. (Sid)
>
>---------- Forwarded Message ----------
>
>And some folks think this guy is presidential material????? NOT!!!!!!!
>
>Subject: John Kerry...You decide
>
>I know nothing about "Swift Boat" tactics so I can't judge the veracity of this letter. Maybe a more knowledgeable classmate can shine some light on this. It was forwarded to me by a high school classmate, USNA grad ('59) and Rear Admiral (Ret.)
>
>Sent to me by an old shipmate....
>
>I was in the Delta shortly after he left. I know that area well. I know the operations he was involved in well. I know the tactics and the doctrine used. I know the equipment. Although I was attached to CTF-116 (PBRs) I spent a fair amount of time with CTF-115 (swift boats), Kerry's command.
>
>Here are my problems and suspicions:
>
> > (1) Kerry was in-country less than four months and collected, a Bronze Star, a Silver Star and three purple hearts. I never heard of anybody with any outfit I worked with (including SEAL One, the Sea Wolves, Riverines and the River Patrol Force) collecting that much hardware so fast, and for such pedestrian actions. The Swifts did a commendable job. But that duty wasn't the worst you could draw. They operated only along the coast and in the major rivers (Bassac and Mekong). The rough stuff in the hot areas was mainly handled by the smaller, faster PBRs.
>
> > (2) Three Purple Hearts but no limp. All injuries so minor that no time lost from duty. Amazing luck. Or he was putting himself in for medals every time he bumped his head on the wheel house hatch? Combat on the boats was almost always at close range. You didn't have minor wounds. At least not often. Not three times in a row. Then he used the three purple hearts to request a trip home eight months before the end of his tour. Fishy.
>
> > (3) The details of the event for which he was given the Silver Star make no sense at all. Supposedly, a B-40 was fired at the boat and missed. Charlie jumps up with the launcher in his hand, the bow gunner knocks him down with the twin .50, Kerry beaches the boat, jumps off, shoots Charlie, and retreives the launcher. If true, he did everything wrong.
> > (a) Standard procedure when you took rocket fire was to put your stern to the action and go balls to the wall. A B-40 has the ballistic integrity of a frisbie after about 25 yards, so you put 50 yards or so between you and the beach and begin raking it with your .50's.
>
> (b) Did you ever see anybody get knocked down with a .50 caliber round and get up? The guy was dead or dying. The rocket launcher was empty. There was no reason to go after him (except if you knew he was no danger to you just flopping around in the dust during his last few seconds on earth, and you wanted some derring do in your after-action report). And we didn't shoot wounded people. We had rules against that, too.
>
> (c) Kerry got off the boat. This was a major breach of standing procedures. Nobody on a boat crew ever got off a boat in a hot area. EVER! The reason was simple. If you had somebody on the beach your boat was defenseless. It coudn't run and it couldn' t return fire. It was stupid and it put his crew in danger. He should have been relieved and reprimanded. I never heard of any boat crewman ever leaving a boat during or after a firefight.
>
>Something is fishy.
>
> > Here we have a JFK wannabe (the guy Halsey wanted to court martial for carelessly losing his boat and getting a couple people killed by running across the bow of a Jap destroyer) who is hardly in Vietnam long enough to get good tan, collects medals faster than Audie Murphy in a job where lots of medals weren't common, gets sent home eight months early, requests separation from active duty a few months after that so he can run for Congress, finds out war heros don't sell well in Massachsetts in 1970 so reinvents himself as Jane Fonda, throws his ribbons in the dirt with the cameras running to jump start his political career, gets Stillborn Pell to invite him to address Congress and Bobby Kennedy's speechwriter to do the heavy lifting, winds up in the Senate himself a few years later, votes against every major defense bill, says the CIA is irrelevant after the Wall came down, votes against the Gulf War, a big mistake since that turned out well, decides not to make the same mistake twice so votes for invading Iraq, but oops, that didn't turn out so well so he now says he really didn't mean for Bush to go to war when he voted to allow him to go to war.
>
>I'm real glad you or I never had this guy covering our flanks in Vietnam. I sure don't want him as Commander in Chief. I hope that somebody from CTF-115 shows up with some facts challenging Kerry's Vietnam record. I know in my gut it's wildy inflated. And fishy. " 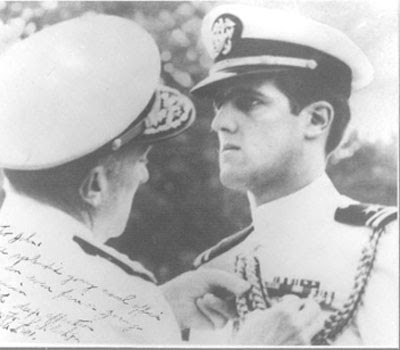 So I forwarded this email to "T". He often has coherent and well-thought out opinions (except for some occasional outbursts -- reminiscent of a Tourette's patient -- directed at telemarketers). His response was interesting:

"Here's my take on the email: the logic outlining why the author believes Kerry's war record is inflated may be valid, however, the timing of the comments are just too perfect. There are just enough details in the text to appease casual readers, but too many other details that are a) unverifiable, or b) not correct. For example, I did a few minutes of Gun Boat research on Google and found out that one of the core competencies of Gun Boat operations were recon and recovery (rescue) from marine/delta areas of 'nam. Gun Boats would REGULARLY be beached (even when taking fire) so that Spec-Ops and other troops could be picked up.

And if the authors examples are valid, surely these kinds of inconsistencies in Kerry's record would have been noticed/addressed, or even used in a smear campaign by Kerry's opponents in the past. He has been in the national spotlight for a number of years (before running for president), so there have been plenty of opportunities.

Now let's take the pragmatic viewpoint-- CNN, NBC, ABC, CBS, BBC-- all powerful television networks that do rather detailed fact checking on their news, especially when it considers politics (just look at how much dirt they dragged up on Clinton when they needed it). And all of the smart people at all of the networks combined have yet to question Kerry's record, or come up with any dirt. That just doesn't add up.

My money is on this being a very clever (and powerful) smear campaign launched by someone who doesn't like Kerry.

PS- I do not like Kerry as a candidate either, so don't for a second interpret my defense of his background as support for the man."

Well, what else do you do when you get an email like this. You turn to Snopes. And Snopes proceeded to completely debunk this story, labelling it patently false. Ring up ten points for "T".

And, just let me say: I'm no fan of Kerry. As Don Imus said this morning: "Kerry's been on more sides of the issues than I have!" But it's important that the truth win out.

at 8:58 PM
Email ThisBlogThis!Share to TwitterShare to FacebookShare to Pinterest