The Real Story behind the "Clinton Economy"


Two unique events influenced the United States economy during Bill Clinton's tenure. Many have forgotten these events and the result is a general misunderstanding of the real drivers behind the "Clinton Economy."

The web was released as a free service by the CERN research facility in 1993. A massive and unprecedented spending boom accompanied the popularization of the web.

2) Another anomalous, technology-related event was the "Year 2000" computer remediation effort (or "Y2K"). An immense repair investment -- estimated at $300 billion -- occurred in the late 1990's as governments and companies rushed to make their legacy computer systems "Y2K-compliant." 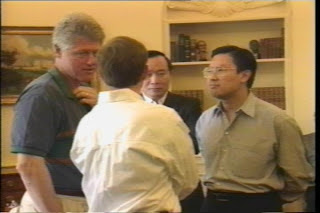 And the tech boom -- the so-called "Clinton economy" -- would have happened regardless.

So when Hillary tells us that she'll duplicate Bill's economic track record, be afraid. Be very afraid.

Update: the Anchoress has a must-read take on the 'Clinton Legacy'.
at 6:06 PM
Email ThisBlogThis!Share to TwitterShare to FacebookShare to Pinterest
Labels: Democrats, Economy, Hillary