Special Counsel Robert Mueller put a nail in the coffin for the numerous conspiracy theories that the Trump campaign worked with Russian operatives to influence the 2016 election.

Over the past two years, at least seven main theories of collusion have appeared in the press and through the infamous Steele dossier.

Former Trump associates Carter Page, George Papadopoulos, Paul Manafort, Michael Cohen and Roger Stone were all alleged at various points to have colluded with Russia. The infamous June 2016 Trump Tower meeting was also alleged to be where collusion between the Trump campaign and Russia occurred.

And then there was the case of Peter Smith, the late GOP operative who allegedly worked with hackers to track down Hillary Clinton’s deleted emails.

The theories percolated in the media, often stoked by Democrats like California Rep. Adam Schiff, who said he saw “more than circumstantial evidence” of collusion.

But Mueller dispelled those theories in a report of his 22-month investigation.

“The investigation did not establish that members of the Trump campaign conspired or coordinated with the Russian government in its election interference activities,” Mueller wrote, according to Attorney General William Barr.

Here are those seven conspiracy theories.

“The reason for using WikiLeaks was ‘plausible deniability’ and the operation had been conducted with the full knowledge and support of TRUMP and senior members of his campaign team,” alleged Steele in a memo in late July 2016. 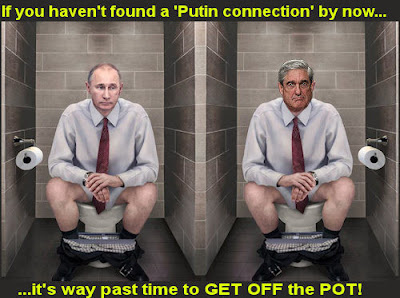 In exchange for the help, Trump’s team agreed to side with Russia on the Ukraine issue.

According to Steele’s Aug. 10, 2016 memo, Page had “conceived and promoted” the idea of releasing stolen DNC emails through WikiLeaks in order to swing Democrats away from Hillary Clinton and towards Bernie Sanders.

Steele also claimed that Page met in Moscow with two Kremlin insiders, Igor Sechin and Igor Diveykin, in early July 2016. Diveykin is alleged in the dossier to have told Page about blackmail material on both Trump and Hillary Clinton.

Page has vehemently denied the allegations from the dossier, which the FBI used to obtain four surveillance warrants against the former Trump aide.

Page was not charged in the Mueller investigation.

On July 31, 2016, the FBI opened a counterintelligence investigation into Papadopoulos based on a tip the bureau had received from the Australian government.

Alexander Downer, the Australian High Commissioner to the U.K., had claimed that during a May 10, 2016, meeting in London, Papadopoulos told him that Russia had information on Hillary Clinton that it planned to release later in the campaign.

Papadopoulos said that two weeks before that meeting, he had breakfast in London with another diplomat, Joseph Mifsud, who told him that the Russians had “dirt” on Clinton in the form of “thousands” of her emails.

He pleaded guilty on Oct. 5, 2017, to lying to the FBI about the extent of his contacts with Mifsud, but he was never charged with a more serious crime.

He served a 14-day prison term and is releasing a book Tuesday.

The former Trump lawyer is accused in the dossier of visiting Prague in August 2016 to meet with Kremlin officials for the purposes of paying off hackers.

“The agenda comprised questions on how deniable cash payments were to be made to hackers who had worked in Europe under Kremlin direction against the CLINTON campaign,” reads Steele’s Dec. 13, 2016, memo.

The dossier’s allegations against Cohen were viewed as some of the strongest claims of collusion that have surfaced during Russia gate.

Cohen has vehemently denied the claims since BuzzFeed published the dossier. On Feb. 27, after he had been sentenced in the special counsel’s probe to three years in prison, Cohen testified that he has never been to Prague.

The testimony was seen as a knockout blow for the dossier’s credibility. Mueller’s findings seemingly ended all debate on the matter.

Cohen was sentenced to three years in prison on Dec. 12 on charges of tax evasion, bank fraud, illegal campaign contributions and making false statements to Congress.

In addition to being linked in the dossier to Carter Page, the former Trump campaign chairman was found to have sent cryptic emails during the campaign referencing Oleg Deripaska, a Russian oligarch who was locked in a business dispute with Manafort.

“If he needs private briefings we can accommodate,” Manafort wrote in an email to an associate on July 7, 2016, The Washington Post has reported.

In April 2016, shortly after he joined the Trump team, Manafort asked the same associate in an email how he could use his new position to “get whole.”

The email has widely been interpreted as Manafort suggesting that he would use his job on the Trump campaign to settle his debts with Deripaska.

But little came of Manafort’s links to Deripaska. Manafort was convicted in federal court in Virginia on Aug. 21, 2018, on charges related to his Ukraine consulting work. He cooperated with the special counsel after pleading guilty on Sept. 14, 2018, to working as an unregistered foreign agent of Ukraine.

The special counsel’s office hinted at times that prosecutors had evidence that dealt with the core issues of the investigation, but they never presented the evidence during court hearings.

Manafort was sentenced to seven-and-a-half years in prison on March 13.

Democrats have seized on a June 9, 2016, meeting between Donald Trump Jr. and a group of Russians as the strongest verifiable evidence of collusion to emerge during the Russia saga.

Trump Jr. accepted the meeting after receiving an email on June 3, 2016, from Rob Goldstone, a music publicist who worked for Russian pop star Emin Agalarov.

In the email, Goldstone said that Agalarov’s billionaire father had met with Russia’s “Crown prosecutor” and wanted to offer the Trump campaign “with some official documents and information that would incriminate Hillary and her dealings with Russia and would be very helpful to your father.”

Trump Jr. accepted, writing: “If it is what you say I love it.”

Goldstone responded to say that a “Russian government attorney” would fly to the U.S. for the meeting.

Trump Jr. attended the meeting with Manafort and Jared Kushner. Russian attorney Natalia Veselnitskaya attended along with Goldstone and several other Russians.

All attendees have claimed that the meeting was a waste of time and that no information regarding the campaign was exchanged.

Veselnitskaya provided the campaign with a short memo containing research compiled by Fusion GPS, the opposition research firm that, ironically, commissioned the Steele dossier. Veselnitskaya was working at the time with Fusion GPS on an investigation of Bill Browder, a London-based financier who spearheaded the Magnitsky Act, a sanctions law opposed by the Kremlin.

Goldstone responded to Mueller’s finding of no collusion in a message to The Daily Caller News Foundation.

“After 2 years, Robert Mueller has delivered his report, stating there was no collusion in the 2016 Presidential election,” Goldstone said. “That includes my email to Donald Trump Jr. and the subsequent Trump Tower meeting … which as I have stated from the beginning, had nothing to do with collusion.”

Veselnitskaya was indicted by prosecutors in Manhattan related to her work against Bill Browder. No other Trump Tower attendees other than Manafort were charged by the special counsel.

One theory of collusion that emerged over the past year was that Trump confidant Stone and conspiracy theorist Jerome Corsi were linked to WikiLeaks.

Prosecutors keyed in on Stone because of tweets he sent and remarks he made in August 2016 that suggested he had inside knowledge of WikiLeaks’ plans to release emails stolen from Democrats.

Stone said in interviews that he had communications with WikiLeaks founder Julian Assange. On Aug. 21, 2016, he tweeted that it would “soon [be] the Podesta’s time in the barrel.”

Stone has insisted that he had no direct contact with WikiLeaks or Assange. He also claims that he did not know that WikiLeaks would release Clinton campaign chairman John Podesta’s emails in October 2016.

Instead, he’s maintained that he received tips about the timing and seriousness of the email releases from Randy Credico, a left-wing activist who is friends with a WikiLeaks attorney.

Stone released text messages that showed Credico providing information about the timing of the email releases.

Corsi was a focus because of emails he sent in August 2016 in which he suggested he had inside knowledge of WikiLeaks’ plans.

“Word is friend in embassy plans 2 more dumps,” Corsi wrote in the Aug. 2, 2016, email to Stone, seemingly referring to Assange, who lives under asylum in the Ecuadorean embassy in London.

“One shortly after I’m back. 2nd in Oct. Impact planned to be very damaging.”

“Time to let more than Podesta to be exposed as in bed w enemy if they are not ready to drop HRC.”

Corsi was offered a plea deal by the special counsel but says he rejected it. Prosecutors wanted him to plead guilty to making false statements about exchanging WikiLeaks-related emails with Stone.

Corsi said he deduced on his own that WikiLeaks had Podesta’s emails and that he had no contact with anyone affiliated with the group.

Stone was indicted by the special counsel on Jan. 24, but not on charges related to conspiracy with Russia or WikiLeaks. He was instead charged with making false statements to the House Intelligence Committee regarding his discussions about WikiLeaks with associates and Trump campaign officials.

One of the more bizarre collusion conspiracy theories involved Peter Smith, a GOP donor and political operative who lived in Chicago.

The Wall Street Journal first reported in June 2017 that Smith worked with numerous conservative operatives and hackers to obtain the 30,000 emails that Hillary Clinton deleted from her private server. Smith allegedly claimed to have been in contact with foreign hackers who claimed to have Clinton’s emails.

The conspiracy theory came to encompass close Trump associates, including Michael Flynn. Smith wrote in correspondence that he had been in contact with Flynn regarding the effort to hunt down Clinton’s emails.

The Wall Street Journal reported last year that Mueller was asking witnesses about the Smith operation. The story festered in the media, with follow-up reporting from BuzzFeed and The Daily Beast.

People who knew Smith, who died by suicide on May 14, 2017, said that he over hyped his Clinton email project. Individuals who Smith claimed were working with him on the effort have since said that they never spoke with Smith about Clinton’s emails. Smith listed Tom Fitton, the president of the watchdog group Judicial Watch, on a memo of associates he said were involved in the email hunt. But Fitton told TheDCNF that he had no knowledge of Smith’s work.