NO FREE WILL: Public Employees in 23 States Forced to Pay Union Bosses Whether They Like it or Not

Public employees can be forced to pay a labor union as a condition of employment in the states highlighted on the map below. 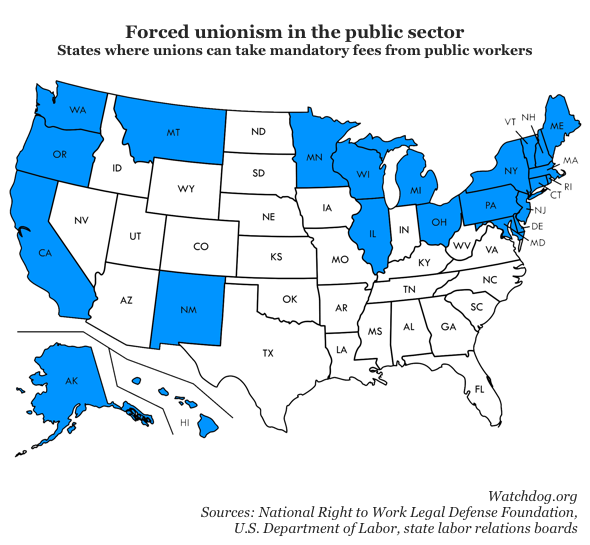 Nearly half of all U.S. states allow public-sector union contracts to require mandatory dues as a condition of employment, based on a review of U.S. Department of Labor records, state labor laws and a National Right to Work Legal Defense Foundation study from 2012.

Although Missouri and Kentucky do not explicitly ban public-sector agency fees, DOL reports indicate no major labor union in either state takes such fees from government workers. Among the states where agency fees are permitted, statutes governing the practice are far from uniform.

National Education Association and American Federation of State, County and Municipal Employees — the nation’s largest and fourth-largest labor unions, respectively — are leading opponents of laws that let workers opt out of both union membership and fees.

AFSCME and NEA have lost thousands of members in Wisconsin and Michigan who were previously required to pay fees through the unions’ local affiliates.

“If they still want to belong to the union and pay dues, government workers are welcome to. But, when given the choice, a vast majority of workers have abandoned their union,” Brett Healy, president of the Wisconsin-based MacIver Institute, said in an email to Watchdog.org.

“Since (Wisconsin) Gov. Scott Walker passed his signature collective bargaining reforms known as Act 10, AFSCME membership alone is down a whopping 70 percent in the state.

“If unions were truly interested in helping workers — and not raw political power — they would not need forced unionization,” Healy said. “Wisconsin is a clear example of what the unions’ priorities really are. They simply care about filling their own pockets, and the pockets of their close political allies, with other people’s hard earned money.”

I discovered that there was a Supreme Court decision which determined that members of the Jehovah's Witness religion could direct their dues to a public charity, because their religion did not permit giving money to political activity or causes.

So, I "joined" the JW Church, and even though the same amount of money was taken against my will from my paycheck, it was given to a local institution for retarded children and adults instead of the union.

Boy, that map looks ready-made for secession. We'll cede Indiana, and take NM & Montana, and it's off to the races.

Washington state not only takes the union dues before you see your paycheck from public service companies, but also from private companies if they have more than 50 employees. No right to work here, union dues right from your check to the union/democrats coffers. Of course they only take it if you want to work, and can have you fired if you don't join.