Erin Fuchs at Business Insider relays an interview with a 28-year old law school grad. He attended a top 20 law school but was unable to find attendant employment. Now he's saddled with $200,000 in debt, makes $45,000 a year, and lives with his parents.

What caught my attention is some advice for those considering law as a profession. 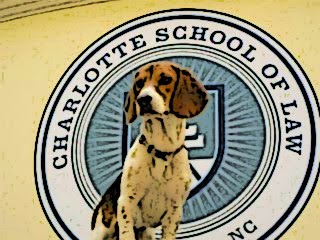 What kind of advice would you have for somebody who's applying to law school?

If you absolutely must go to law school even given the barrage of negative economic data about the legal industry and law school grads, there are only three reasons to go to law school: (1) the law school you were accepted to is named Harvard, Yale, or Stanford; (2) you got a full or very nearly-full scholarship; or (3) you have a family member or close friend who can 100% guarantee you a secure lawyer position.

Yes, absolutely. The hype out there is that these degrees are in demand and valued by law firm employers. That's true to a certain extent but if you're part of the 80% not in the top 20%, your top law school degree is no better than the 75th ranked school where you could have got a full ride. My law degree has no power in the marketplace because I did not graduate near the top of the class. My recommendation would be to drop out immediately if you're not in the top quartile after the first semester. Don't wait until the second semester to rectify any B- grades. You need to get out and get a new life plan or else you'll likely end up like me.


* * *
Is there any aspect of the law school bubble that you think is inaccurately portrayed in the media?

I think the percentage of graduates that are employed is not a statistic that the media should myopically focus on. It's more important to know the salary of these jobs. Debt-to-salary ratio would be a great metric to understand. Also, I think law schools are under a moral duty to report what percentage of their graduates are on public interest payment plans or income-based repayment plans. Law schools can easily survey ALL of their students but they don't because they know the picture will be ugly and won't help lure new students to hand them loan money. Law schools have their graduates' contact information and you can be sure, they will hunt them down like Hellhounds if the loans go unpaid.

The media reports about the percentage of law grads who are employed but this is a pointless statistic if grads are landing jobs like my $1,000/month job, free internships where licensed attorneys have to essentially pay to work, or low-paid jobs where the law school hires its own grads. Also, bar passage rate is another meaningless statistic if the grad doesn't have a job. Law school does not teach its graduates how to practice law and they need to be trained by experienced attorneys after graduation so just having a bar license is meaningless to a new graduate.

According to Time, in 2007 more than 91 percent of law school grads had jobs for which passing the bar exam was required; in 2009 just 65 percent had those types of jobs.

at 8:55 PM
Email ThisBlogThis!Share to TwitterShare to FacebookShare to Pinterest
Labels: Education

I think I understand why he's not doing so well - he thinks a $45K/year job pays $1K/month. Maybe law schools should teach arithmetic.

The latest trend to subvert yutes from professional careers is pure nonsense. There is value in pursuing your passion and/or the full exercise of your talent if you have your sights set on an honorable thing. Education is a sure way to take positive steps forward, life is for the living! If we are encouraging a generation of people to fear sowing then we are depriving them of reaping the results of a life well lived.

It's true law school doesn't teach you how to practice law. And for some, learning how to practice takes a long time. While undergoing that process, other truths about the practice come to light.
First, as an associate, you'll be worked hard and exploited. You are viewed as a revenue source. It will never end.
Second, you begin to realize the extent of corruption in the field. Corruption that the ethics boards don't touch. It infects every specialty and it is rampant. Not just lawyers cheating clients, but judges and state bureaucrats who abuse discretion to award favors. The law is usually fair minded and simple. How it's applied is a different matter.
Third, after you pay your debts and recognize you have no savings (unless you are a 35-38 hour per week government lawyer who has grown accustomed to barely performing any work for the last two decades) you recognize you will work until you are 75. You see the most corrupt and the government lawyers retiring well off.
If you love your children, steer them away from law school.

$45k/year takeaway the Fed's take, Socialist Security, Mediscare, State and local taxes, and then service the $200k debt (that's like a mortgage on a suburban home, btw), and I do not doubt take home is less than $1000/month.