“If they bring a knife to the fight, we bring a gun,” Obama said
Jim Malone would be proud. 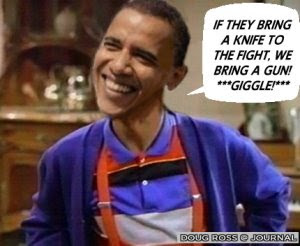 Now, it’s a kind of funny thing for him to say at a fundraiser but consider two things.

If a Republican had used a gun metaphor against Obama or any Democrat, the world would have come to an end. The press and the Democrats (pardon the redundancy) would go bats**t crazy about it and my guess is McCain would borrow Obama’s bus to throw the offender under it.

Secondly, it’s great for Obama to talk all tough but there’s the little part about him not being man enough to take up McCain’s joint appearance challenge...

It's also redundant considering Barrack is 100% against guns and looking to reduce all military force, both stateside and overseas and abolish the entirety of the second amendment all together leaving our country and our very homes open to attack from enemies, both foreign and domestic, cutting down the very oath our military swears by to protect the common man.