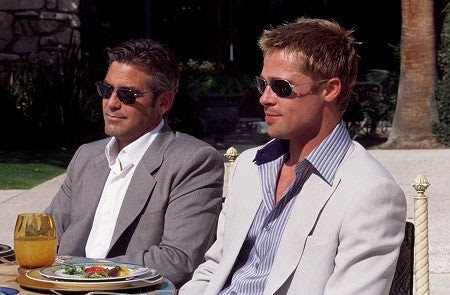 I saw Ocean's Twelve a couple of days ago and was, as most critics were, very underwhelmed. All that talent and so little story. Let's count the plot devices, many of which were flimsier than Scott Peterson's alibi...

Skip to the next section (in which I rewrite the plot of Ocean's Twelve) if you have not, and intend to, see the current movie. These are the things that really, really pissed me off about the screenplay:

1) Okay, so how does the Nightfox steal the priceless, incredibly well-protected treasure from antiquity, the Faberge Egg? Yes, that's right - he dances over randomly oscillating "laser beams" using a combination of yoga moves and Matt Furey's Combat Conditioning exercises. Let's not even mention that this plot device is a recurring theme in Catherine Zeta-Jones movies, given that she used an identical set of moves in the stunningly underwhelming Entrapment. That's it. The entire Nightfox plan for stealing the egg. And it works! Oh, and let's not even get into the nom de guerre of Nightfox. Let's just say that David Hasselhoff and the Chevrolet Camaro factory are considering separate lawsuits.

2) In a matter of two days' time, Ocean's team (a) acquires six (6) huge, highly sophisticated, computer-controlled hydraulic jacks (that, by the way, must be capable of operating underwater); (b) installs said jacks underneath a house in Amsterdam in pitch black water; and (c) commandeers a submarine -- in the middle of downtown Amsterdam, mind you -- from which to coordinate the house lifting operation. Uhmm, how about using a f**king ladder on the rooftop to get the bow angle they need... instead of jacking the house up? I guess jacking the house up was... easier?

3) Julia Roberts playing Tess, who then pretends to be Julia Roberts? Bruce Willis playing Bruce Willis? 'Nuff said. I know many reviewers picked on this outrageous escape valve, claiming that it was effective as a 12-foot sailboat in a hurricane. Or that it was an "egregious, ineffective plot device that highlighted the writers' complete lack of ability and creativity". Okay, maybe they didn't say any of that, but they should have said it... and worse.

I could go on... but, thankfully, I won't. What I will do, dear reader, is tell you how I would have plotted Ocean's Twelve. So sit right back and you'll hear a tale... a tale of a fateful robbery...

Terry Benedict has never forgotten the humiliating and monstrously large theft at his casinos. It tarred his reputation, diminished his ego, and made him, for a time, the laughingstock of the casino industry.

His minions have been searching for Daniel Ocean for months, offering an immense reward to those who might provide information on his whereabouts. Knowing Ocean's central weakness - a propensity for "visiting" high-end jewelry stores -- Benedict's team mass mails every jewelry store in the country with a flyer of Ocean and an offer of reward: one million dollars.

Sure enough, Ocean is spotted perusing diamond earrings in Tiffany's at Copley Plaza in Boston. Benedict's goons grab Tess and hold her as ransom while a startling ultimatum is delivered to Danny: repay the stolen money, with interest, in six months' time. Otherwise, Tess is toast and Benedict will track down the entire team -- and their families -- and kill them all. Their total tab? $190 million.

Ocean assembles his original team... even Sol, who realizes that his beloved wife may pay the ultimate price for his crimes. But it is Rusty (Brad Pitt) who has the best idea. It evolved as he courted Amsterdam's leading stolen art detective, Isabel Lahiri (Catherine Zeta-Jones). Amsterdam is home, of course, to the world-famous Van Gogh museum, which possesses many of Van Gogh's finest works. Rusty knows the ins and outs of not only the museum, but also the identity of a mysterious Japanese art collector willing to pay for the entire Van Gogh collection. The amount? How does a quarter of a billion dollars sound? Best of all, there are... no questions asked.

An escrow account is arranged with the Japanese principal. And the meticulous planning, a hallmark of Danny Ocean, begins. The heist itself is a doozy: the Van Gogh museum possesses triply redundant security systems and two completely independent teams of security guards. The latter team is a quick-react force possessing all the tactical equipment of a major city SWAT team, including night vision.

There are perimeter alarms at every door and entry-way... motion detectors... pressure-sensitive switches... and even infrared sensors that can detect body temperature changes through the museum. All must be dealt with.

Ocean dispatches two members of his team to Las Vegas; they are tasked with filming the faces of Benedict's key security personnel and gaining access to Benedict's personal safety deposit box at the Belaggio.

He also sends two of the team to the Rembrandt House, Amsterdam's premiere historical venue, to perform reconaissance. The Rembrandt House was home to the immortal Rembrandt Harmensz van Rijn and his wife Saskia from 1639 to 1658; this is where the master painted some of his most memorable works, including "The Night Watch".

On the critical night, a burglar alarm and a fire alarm both go off at the Rembrandt House, occupying the Fire and Police departments. During the hullabaloo, three police cruisers pull up at the back entrance of the Van Gogh Museum. The police officers alert the security guards to the ongoing emergency at the Rembrandt house and gain access to the museum. And then they take over, handcuffing the security guards and stripping the place clean of Van Gogh's works.

As far as the security cameras are concerned, Basher Tarr (Don Cheadle) has seamlessly spliced the facial images of Benedict's goons on the museum's security tapes using advanced, computer-generated imaging. Ocean also anonymously alerts the authorities to the fact that a stolen Van Gogh painting is in Benedict's personal safe at the Bellagio.

Closing scene: Terry Benedict is led off in handcuffs, with bail certain to be denied by the man who orchestrated the theft of dozens of Van Goghs. With Benedict behind bars, Ocean's Twelve is now safe and sound. And, oh by the way, in possession of $250 million. Roll credits!

at 1:25 AM
Email ThisBlogThis!Share to TwitterShare to FacebookShare to Pinterest