Book Review: A Touch of Death 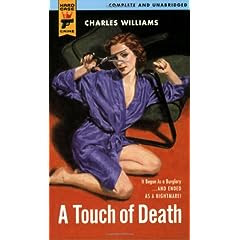 From the instant Lee Scarborough spotted Diana James sunning herself sans bikini top, he should have known she meant trouble. The ex-football star was trying to sell his car to pay rent money. Diana James just happened to live in the same building as a prospective buyer. And she recognizes a useful pawn when she sees one: the healthy, athletic Scarborough has all the tools she needs to pull off a caper.

Diana invites him up to her apartment, tests her mark, and then lays out what seems like a simple plan. A banker had embezzled $120K of currency and then hidden it in his estate home... just before turning up up dead. Diana knows the embezzler's wife and intends to take her on a drinking binge on the gulf coast while Scarborough enters the home and locates the dough. Scarborough and James agree to split the $120 grand after they pull off the caper.

Soon Scarborough finds himself in the dark and cavernous home, scrounging around for the bankroll. One little problem: the widow, Madelon Butler, is in the home, drunk as a skunk. And, to complicate matters, someone else is also in the house...

As the tale unfolds, you'll find yourself startled and impressed with the crafty Ms. Butler -- who plays all of the characters around her like fiddles. Charles Williams has created an elegant, captivating story of exceptional quality: built like a Swiss watch, the plot just keeps unwinding... along with Scarborough's life. This is a tremendous story and one that should be optioned into film, just like Williams' Hot Spot.
at 6:30 AM
Email ThisBlogThis!Share to TwitterShare to FacebookShare to Pinterest