When it's time to say goodbye... Say It With Bullets 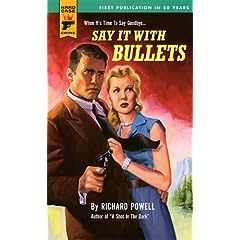 The jamoke in the UPS truck screeched to a halt in front of my house. He walked up the sidewalk carrying a box. There was a hint of menace in his saunter. By habit, I checked my shoulder holster to ensure it was in place. Anything could have been in the box. A severed head. Tickets to the Ice Capades. Wind chimes from Sharper Image. The driver tossed the box at my feet and vamoosed before I had a chance to question him.

I ripped it open only to discover an Amazon shipment of paperback Hard Case Crime books. They looked like they'd been lashed together by Shakey the clown during the last tornado. I grabbed this book first. I'd ordered it based on its title alone. In retrospect, it was a bigger mistake than hiring Tony Soprano as a financial advisor. The characters were paper thin, with a plot that was even thinner - aluminum foil-style. While the dialogue was snappy with the kind of metaphors that Raymond Chandler would have enjoyed, everything else suffered.

In all seriousness, I'm a huge fan of pulp fiction. But this particular effort was disappointing. Unlike some other veteran authors in the Hard Case series (e.g., Charles Williams), Powell had a better shot of replacing Ethel Merman in Gypsy  than getting this book classified as timeless. Apart from some clever phrasing and a decent hook, there isn't much to commend.
at 8:40 PM
Email ThisBlogThis!Share to TwitterShare to FacebookShare to Pinterest