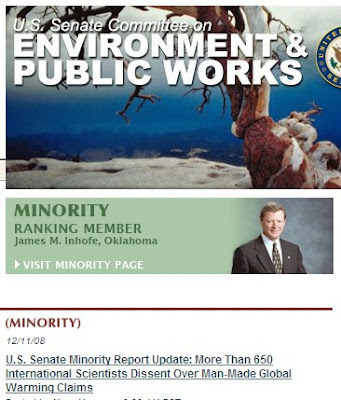 A 231-page report (PDF), published by the U.S. Senate, offers an astounding panorama of dissenting opinions that thoroughly debunk the so-called "consensus" on anthropogenic (human-caused) global warming. Some of the highlights:

“I am a skeptic… Global warming has become a new religion.” - Nobel Prize Winner for Physics, Ivar Giaever.

“Since I am no longer affiliated with any organization nor receiving any funding, I can speak quite frankly….As a scientist I remain skeptical. “The main basis of the claim that man’s release of greenhouse gases is the cause of the warming is based almost entirely upon climate models. We all know the frailty of models concerning the air-surface system.” - Atmospheric Scientist Dr. Joanne Simpson, the first woman in the world to receive a PhD in meteorology, and formerly of NASA, who has authored more than 190 studies and has been called “among the most preeminent scientists of the last 100 years.”

Warming fears are the “worst scientific scandal in the history... When people come to know what the truth is, they will feel deceived by science and scientists.” - UN IPCC Japanese Scientist Dr. Kiminori Itoh, an award-winning PhD environmental physical chemist.

“The IPCC has actually become a closed circuit; it doesn’t listen to others. It doesn’t have open minds… I am really amazed that the Nobel Peace Prize has been given on scientifically incorrect conclusions by people who are not geologists,” - Indian geologist Dr. Arun D. Ahluwalia at Punjab University and a board member of the UN-supported International Year of the Planet.

“So far, real measurements give no ground for concern about a catastrophic future warming.” - Scientist Dr. Jarl R. Ahlbeck, a chemical engineer at Abo Akademi University in Finland, author of 200 scientific publications and former Greenpeace member.

“Anyone who claims that the debate is over and the conclusions are firm has a fundamentally unscientific approach to one of the most momentous issues of our time.” - Solar physicist Dr. Pal Brekke, senior advisor to the Norwegian Space Centre in Oslo. Brekke has published more than 40 peer-reviewed scientific articles on the sun and solar interaction with the Earth.

“The models and forecasts of the UN IPCC "are incorrect because they only are based on mathematical models and presented results at scenarios that do not include, for example, solar activity.” - Victor Manuel Velasco Herrera, a researcher at the Institute of Geophysics of the National Autonomous University of Mexico

“It is a blatant lie put forth in the media that makes it seem there is only a fringe of scientists who don’t buy into anthropogenic global warming.” - U.S Government Atmospheric Scientist Stanley B. Goldenberg of the Hurricane Research Division of NOAA.

“Even doubling or tripling the amount of carbon dioxide will virtually have little impact, as water vapour and water condensed on particles as clouds dominate the worldwide scene and always will.” – . Geoffrey G. Duffy, a professor in the Department of Chemical and Materials Engineering of the University of Auckland, NZ.

“The Kyoto theorists have put the cart before the horse. It is global warming that triggers higher levels of carbon dioxide in the atmosphere, not the other way round... A large number of critical documents submitted at the 1995 U.N. conference in Madrid vanished without a trace. As a result, the discussion was one-sided and heavily biased, and the U.N. declared global warming to be a scientific fact,” Andrei Kapitsa, a Russian geographer and Antarctic ice core researcher.

“Nature's regulatory instrument is water vapor: more carbon dioxide leads to less moisture in the air, keeping the overall GHG content in accord with the necessary balance conditions.” – Prominent Hungarian Physicist and environmental researcher Dr. Miklós Zágoni reversed his view of man-made warming and is now a skeptic. Zágoni was once Hungary’s most outspoken supporter of the Kyoto Protocol.

“For how many years must the planet cool before we begin to understand that the planet is not warming? For how many years must cooling go on?" - Geologist Dr. David Gee the chairman of the science committee of the 2008 International Geological Congress who has authored 130 plus peer reviewed papers, and is currently at Uppsala University in Sweden.

“Gore prompted me to start delving into the science again and I quickly found myself solidly in the skeptic camp... Climate models can at best be useful for explaining climate changes after the fact.” - Meteorologist Hajo Smit of Holland, who reversed his belief in man-made warming to become a skeptic, is a former member of the Dutch UN IPCC committee.

“The quantity of CO2 we produce is insignificant in terms of the natural circulation between air, water and soil... I am doing a detailed assessment of the UN IPCC reports and the Summaries for Policy Makers, identifying the way in which the Summaries have distorted the science.” - South Afican Nuclear Physicist and Chemical Engineer Dr. Philip Lloyd, a UN IPCC co-coordinating lead author who has authored over 150 refereed publications.

“Many [scientists] are now searching for a way to back out quietly (from promoting warming fears), without having their professional careers ruined.” - Atmospheric physicist James A. Peden, formerly of the Space Research and Coordination Center in Pittsburgh.

“All those urging action to curb global warming need to take off the blinkers and give some thought to what we should do if we are facing global cooling instead” - Geophysicist Dr. Phil Chapman, an astronautical engineer and former NASA astronaut, served as staff physicist at MIT (Massachusetts Institute of Technology)

“Creating an ideology pegged to carbon dioxide is a dangerous nonsense... The present alarm on climate change is an instrument of social control, a pretext for major businesses and political battle. It became an ideology, which is concerning.” - Environmental Scientist Professor Delgado Domingos of Portugal, the founder of the Numerical Weather Forecast group, has more than 150 published articles.

“CO2 emissions make absolutely no difference one way or another….Every scientist knows this, but it doesn’t pay to say so…Global warming, as a political vehicle, keeps Europeans in the driver’s seat and developing nations walking barefoot.” - Dr. Takeda Kunihiko, vice-chancellor of the Institute of Science and Technology Research at Chubu University in Japan.

“The [global warming] scaremongering has its justification in the fact that it is something that generates funds.” - Award-winning Paleontologist Dr. Eduardo Tonni, of the Committee for Scientific Research in Buenos Aires and head of the Paleontology Department at the University of La Plata.

“Whatever the weather, it's not being caused by global warming. If anything, the climate may be starting into a cooling period.” Atmospheric scientist Dr. Art V. Douglas, former Chair of the Atmospheric Sciences Department at Creighton University in Omaha, Nebraska, and is the author of numerous papers for peer-reviewed publications.

“But there is no falsifiable scientific basis whatever to assert this warming is caused by human-produced greenhouse gasses because current physical theory is too grossly inadequate to establish any cause at all.” - Chemist Dr. Patrick Frank, who has authored more than 50 peer-reviewed articles.

“The ‘global warming scare’ is being used as a political tool to increase government control over American lives, incomes and decision making. It has no place in the Society's activities.” - Award-Winning NASA Astronaut/Geologist and Moonwalker Jack Schmitt who flew on the Apollo 17 mission and formerly of the Norwegian Geological Survey and for the U.S. Geological Survey.

“Earth has cooled since 1998 in defiance of the predictions by the UN-IPCC.. .The global temperature for 2007 was the coldest in a decade and the coldest of the millennium... which is why ‘global warming’ is now called ‘climate change.’” - Climatologist Dr. Richard Keen of the Department of Atmospheric and Oceanic Sciences at the University of Colorado.

“I have yet to see credible proof of carbon dioxide driving climate change, yet alone man-made CO2 driving it. The atmospheric hot-spot is missing and the ice core data refute this. When will we collectively awake from this deceptive delusion?” - Dr. G LeBlanc Smith, a retired Principal Research Scientist with Australia’s CSIRO. (The full quotes of the scientists are later in this report)

Don't send these quotes to your liberal progressive friends. Their poor, abused noggins might explode, sending wooden splinters in unpredictable directions like shrapnel.

And -- whatever you do -- don't tell the Climatards that it snowed in New Orleans today.