In 1998 Russian academic and former KGB analyst Igor Panarin began predicting that the U.S. will fall apart in 2010. Given the recent economic turbulence, more Russian agencies and organizations are paying closer attention.

Mr. Panarin posits, in brief, that mass immigration, economic decline, and moral degradation will trigger a civil war next fall and the collapse of the dollar. Around the end of June 2010, or early July, he says, the U.S. will break into six pieces -- with Alaska reverting to Russian control... 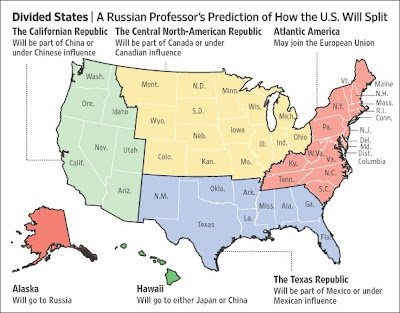 ...He based the forecast on classified data supplied to him by FAPSI analysts, he says. He predicts that economic, financial and demographic trends will provoke a political and social crisis in the U.S. When the going gets tough, he says, wealthier states will withhold funds from the federal government and effectively secede from the union. Social unrest up to and including a civil war will follow. The U.S. will then split along ethnic lines, and foreign powers will move in.

California will form the nucleus of what he calls "The Californian Republic," and will be part of China or under Chinese influence. Texas will be the heart of "The Texas Republic," a cluster of states that will go to Mexico or fall under Mexican influence. Washington, D.C., and New York will be part of an "Atlantic America" that may join the European Union. Canada will grab a group of Northern states Prof. Panarin calls "The Central North American Republic." Hawaii, he suggests, will be a protectorate of Japan or China, and Alaska will be subsumed into Russia...

[He] called U.S. foreign debt "a pyramid scheme," and predicted China and Russia would usurp Washington's role as a global financial regulator.

Georgia will join the Texican Republic? And South Carolina will ally with Northeastern states and join the EU?

Panarin must not be too familiar with these states.
at 8:46 AM
Email ThisBlogThis!Share to TwitterShare to FacebookShare to Pinterest
Labels: Economy