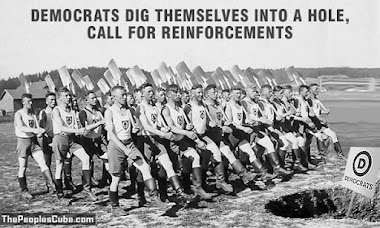 The biggest media topic of the day, apart from how president-elect Trump is Hitler, is how the Democratic party can dig its way out of the sinkhole in which it woke up on November 9th. In the meantime, perpetual panic attacks among Democratic elites result in uncontrollable anger, projections, verbal incontinence, hallucinations, and outright lunacy.

Amidst alarming reports that her own party is being consumed by crisis, chaos, and infighting, Elizabeth Warren all of a sudden decided to call Trump's well-organized transition "chaotic" and demanded that a federal agency investigate this matter.

It was followed by the delusional idea of a ballot recount in three states at once. The debate is still open on who was more insane: those who brought it up a week after the expired deadline - or their supporters who donated over $5 million of their money for this crash and burn project.

Other widespread examples of lunacy, verbal incontinence, hallucinations, and projections include intrusive and repetitive thoughts about race, racism, and racists.

Aiming to regroup and clean up the mess without losing any of their personal power, confused Democratic elites are offering more erratic solutions, from embracing white working class nationalism to excluding white people from running the party.

As a result, the Democratic party has lost the White House, Senate, House of Representatives, many governorships, state and local legislatures, as well as the ability to make Supreme Court appointments that will determine the direction of the Judiciary for a generation. The Democrat party today is the weakest it has been since the 1920s.

My only regret is that the Democrats hadn't tested all of their half-baked ideas on their party first, before forcing them on the entire nation. Had they done that, their party would not have survived natural selection and today's Republicans would have to compete with a lot more sensible group of people.

In spite of all the evidence, some Democratic hard-liners continue to believe their party lost the elections because it didn't fully live up to its own principles.

Power to the hard-liners! If only they could force every rank and file Democrat to live exactly the way they want the rest of Americans to live, we'd see their ranks deflate to the size of the Communist Party USA faster than you can say "hypocrisy."

Things the Democratic elites should do in order to live up to their party principles:

With any luck, the least brainwashed of them will lose faith and stop pushing their hoary Utopian dogmas on the rest of us. There will be others, of course, who will stay the course and keep digging their way out of their hole until they surface in North Korea. Godspeed, comrades! Please dig faster and use bigger shovels.

Being an ex-Soviet citizen, I naturally perceive the reality through the prism of my past Soviet experiences. That said, today's political developments in America remind me of what happened in the USSR during Perestroika and Glasnost. The day Trump won the election I felt as elated as when the USSR officially collapsed.

I was lucky to have witnessed the fall of two evil empires from the inside. One was run by the monstrous Communist Party; the other by the well-greased Democratic party machine.

In the USSR, the Communist Party thrashed violently, obsessed with its own self-preservation without any regard to the crumbling Iron Curtain and the fact that nobody feared them any longer, nor believed a single word coming out of their mouths. And then it went down surprisingly fast. Disbanded without a whimper. 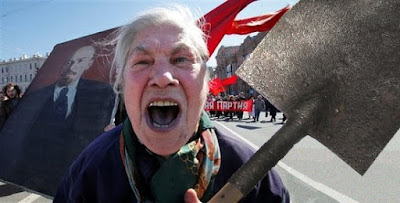 In the U.S., hardly anyone believes the leftist media anymore, especially after it was exposed to be a cog in the Democratic propaganda machine. Ideologically driven Hollywood movies tank in the box office, and politically correct colleges are quickly becoming the butt of every joke.

Make no mistake, well-connected Soviet apparatchiks still held on to their power and money, retaining many key positions in the government. That largely explains the undying culture of corruption in ex-Soviet countries that had never purged their ex-Communist officials, which badly needed to be done for the same reason de-Nazification was done in post-World War II Europe. But at least the stifling ideology was gone and living standards began to improve by leaps and bounds.

The Trump administration would be wise to perform a thorough lustration of leftist ideologues in all government agencies, similar to how it was done in Poland and other former Eastern Bloc states that have successfully purged their communist past. I'm not calling for purges of all rank and file Democrats, but the more zealous ideologues in the government had better get ready to use their professional skills, if any, in the private sector.

The election was only a preview; the real fight is about to begin. We need to move fast while the Democratic party is wallowing in its crisis. In the words of their own apparatchik, you never let a serious crisis go to waste.

Excellent. And, yes, purge all the anti-American government employees. Kick'em to the unemployment line, or, better yet - kick'em to the curb. You don't belong here. YOU are NOT who WE are. Obama, same for you. YOU ARE NOT WHO WE ARE. Get lost. Very, very far away.


Open up most govt jobs to non-citizens, or just don't check. Remove seniority and civil service protection so they see the world as roofers looking for work do.

Replace half of all teachers and principals with half price H1-B workers from India. If they complain call them racists. Tell them they just can't compete in the world economy.