CONGRESS: We Will Defund You United Nations Pukes Over Your Anti-Israel, Pro-Terror Vote

By Joel B. Pollak

She, and her boss, President Barack Obama, could have voted no, in keeping with precedent, and in deference to the incoming administration of President-elect Donald J. Trump. Instead, they let the resolution pass.

In anticipation of Obama’s suspected — now confirmed — abstention, members of Congress threatened to de-fund the UN. The U.S. accounts for some 22% of the UN’s budget, supporting a large, comfortable bureaucracy and its various programs.

This provocative action by the United Nations is an outrage and must be dealt with sternly and forcefully.

In addition, any nation which backs this resolution and receives assistance from the United States will put that assistance in jeopardy.

Others joined Graham’s call to defund the UN, including Sen. James Lankford (R-OH). The Republican Jewish Coalition issued a statement also calling for defunding the UN:

By allowing the United Nations’ anti-Israel resolution to be adopted by the Security Council, in the face of fierce bi-partisan opposition, the actions of the Obama Administration will forever be remembered as a dark, shameful moment for our country. The resolution passed today will only serve as a greater barrier to peace, which can only truly be achieved through negotiations. Instead of pressuring the Palestinians to be a partner for peace, President Obama chose to break with long standing diplomatic practices and allowed the one-sided, anti-Israel United Nations to be used as a tool to bludgeon Israel, our greatest ally in the Middle East. 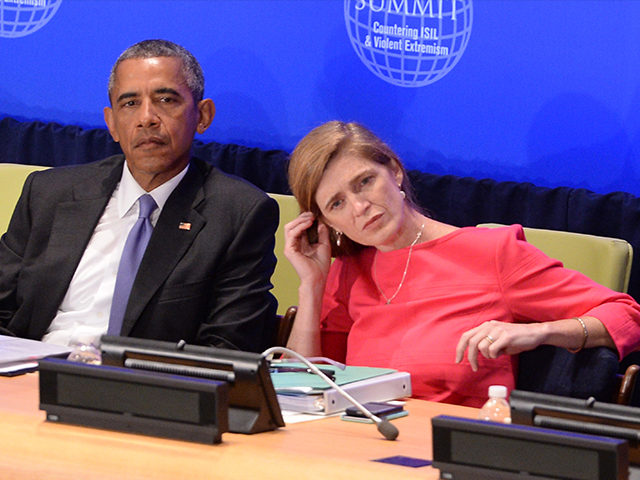 We applaud the efforts of Republican Senators, led by Senator Graham, to strip funding to the United Nations, which has time and again showed their anti-Israel bias. What happened today will forever be on the heads of the President, his Party, and groups like J Street that remained silent.

The passage of the resolution marks the Obama administration’s final stab in the back against Israel, on its way out the door and in defiance of the results of the November election, when voters chose Trump’s more assertive U.S. foreign policy.

In her statement attempting to justify the Obama administration’s failure to exercise its veto, Power cited a statement by President Ronald Reagan in 1982 opposing further Israeli settlements. She argued — incorrectly — that opposition to Israeli settlements had been the policy of every U.S. administration since 1967, ignoring the fact that President George W. Bush had assured Israel it would accept some settlements, as a reward for Israel’s recognition of the Palestinian aspiration to statehood.

Power attempted to cover the Obama administration’s backstabbing by noting that Israel is unfairly singled out for criticism by the UN: “Israel continues to be treated differently than other UN member states,” she said.

Yet even as Power said those words, she and the Obama administration participated in precisely that kind of singling out — subjecting Israel to criticism that no other states in similar situations had ever faced, in a week when the city of Aleppo fell to the genocidal Syrian regime.

She further argued that the U.S. would have blocked any resolution that threatened Israeli security. The implication was that a resolution that is factually and legally false, and which rewards Palestinians for decades of terror, does not harm Israel.

Power stated that “we cannot stand in the way of this resolution as we seek to preserve a chance to attain” the goal of a two-state solution. The claim flies in the face of Israeli efforts to renew negotiations — even to freeze settlement construction — in vain.

President-elect Trump had managed to keep the resolution at bay the day before by opposing it publicly, and by convincing Egypt to withdraw it from the agenda. But the Obama administration, aided by temporary Security Council members New Zealand, Malaysia, Venezuela, and Senegal, persisted.

The vote is a watershed: Israel faces a new and more hostile diplomatic reality, and the myth of bipartisan support for Israel has been shattered forever. Democrats will now bear an anti-Israel legacy.

The UN needs to be hounded out of its general HQ in Turtle Bay and the site returned to US sovereignty.
Trump and his company will know exactly what to do with that valuable property.

BTW - After this Israel-hating bastard fed the beleaguered nation to the murderous islamofascist and leftist wolves, this drug-addled piece of crap masquerading as President had the unmitigated gall to send out a photo of him with hangers on lighting Hanukkah candles.

The irony is, of course, completely lost on this dimwitted ignoramus. Hanukkah celebrates the restoration of Jewish sovereignty over precisely the area of Israel he has stolen for his bloodthirsty, genocidal Pals.

Congress will defund nothing. Most repubs, at best, are democ light
Hubrus beyond measure

Yes, and there's NO WAY ON EARTH Trump will win the election.