IN HIS FINAL DAYS: Obama Poised to Take Another Potshot at Israel

U.S. companies are in for a shock as President Obama takes aim once again at Israel in the final month of his presidency. In the coming days, he is expected to direct his team at the United Nations to vote for U.S. funding of "BDS," the boycott, divestment and sanctions campaign aimed at financially ruining Israel and smearing the companies with which it does business.

The vote concerns the U.N. budget that is currently being negotiated and scheduled to be finalized this week. One of the line items provides funding for the implementation of a Human Rights Council resolution adopted in March. The resolution calls for the creation of a blacklist of companies around the world doing any business, directly or indirectly, connected to Israeli settlements. In effect, it launches a U.N.-sponsored BDS movement. Since the General Assembly holds the purse strings for the Human Rights Council's operations, the time has come to allocate the money to pay for it.

With Obama's U.N. diplomats sitting on their hands while the funding scheme is being hotly debated, American taxpayers can expect to find themselves funding BDS in the very near future, with American businesses caught in the crosshairs. 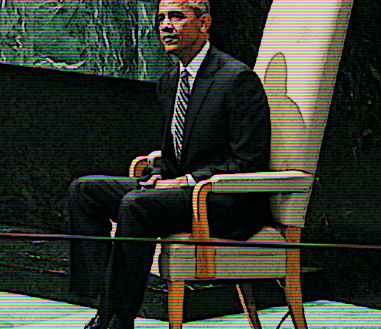 Israeli settlements consist of Jews living peaceful, productive lives on disputed territory whose ownership, by existing agreement, is to be determined through negotiations. This Jewish presence on Arab-claimed territory is offensive to a deeply anti-Semitic enemy that seeks to guarantee that land swapped in an eventual deal to create a Palestinian state will be Jew-free.

In the context of a Palestinian policy of ethnic cleansing, these Jewish farms, enterprises and schools are an "obstacle to peace," to use the preferred verbiage of the United Nations and the Obama administration. The fact that Jews have repeatedly been moved in advance of a negotiated end to hostilities by their own government for the sake of peace, only to have those hopes dashed time and again, is simply dismissed.

The real obstacle to ending the Arab-Israeli conflict should be obvious after seven decades of non-stop war and terror since the minute of Israel's creation. Arab rejectionists, on both the battlefield and diplomatic turf, consider all of Israel to be occupied territory and an illegal settlement from 1948 on. Rolling back the clock to the 1967 war is one stop on the way.

Those facts, however, will not intrude on Obama's BDS calculus. He is an avid supporter of the Human Rights Council, one of the most extreme anti-Israel bodies at the United Nations. Joining the council was one of his first foreign policy initiatives. After serving two consecutive three-year terms starting in 2009, the rules required a one-year hiatus. Hence, the U.S. has not been a council member in 2016.

But attempting to rule from the grave, a week before the U.S. elections, Obama sought and obtained another three-year term to commence Jan. 1, 2017. As a council fan, he has no intention of objecting to funding it.

On the contrary, U.N. budget documents published Dec. 13 indicate that "new requirements" to implement council resolutions and decisions taken over the past year almost double the original $23 million it was allowed to spend for this purpose in the 2016-2017 biennium. Evidently, council devotees took for granted an Obama administration carte blanche.

On Dec. 15, the General Assembly budget committee (the "Fifth Committee") met to approve the funds for the Human Rights Council, including the funds to create the Council's blacklist — aka BDS "database." U.N. documentation indicates that the cost is $138,700 "to pay for one staff member to create the database over a period of 8 months and present a report" to the Human Rights Council in March 2017. In other words, authorization is being backdated to pay for an operation already underway.

To put this in perspective, the council resolution on "Realizing the equal enjoyment of the right to education by every girl" needs $82,800. "Effects of terrorism on the enjoyment of all human rights" needs $74,700. And a blacklist of companies with ties to Israel needs $138,700.

At the Dec. 15 meeting, the Israeli U.N. representative on the Fifth Committee pleaded with "member states to reject the funding request." But Obama's U.N. diplomat — who was present and spoke on an unrelated issue — said nothing. The Palestinian representative floated procedural objections, claiming it was a done deal. Precedent, though, is not on his side.

In 2007, when the U.N. allotted money to fund a second iteration of the racist "anti-racism" Durban conference, the Bush administration stood rock solid on a matter of principle. The U.S. called for the vote in the General Assembly's Fifth Committee and unequivocally voted against. When it lost, it voted against the entire U.N. biennial budget.

Obama is not that man. He prefers to stand shoulder-to-shoulder with human rights authorities on the Human Rights Council like Saudi Arabia, Qatar, China and Cuba. He is prepared to spend American taxpayer dollars to create a blacklist of companies doing business with the democratic state of Israel instead of the world's most horrific regimes. A presidency spent courting moral relativism, forsaking U.S. allies, and indulging U.S. adversaries is about to reach its lowest point yet.

Read more at the Washington Examiner.

If you've ever trained gripping behavior in dogs this is known as a "cheap shot". Getting a nip in is a sign of weakness and frustration when self control brings a far better reward. Obama truly is the "mongrel" he claimed to be. The only satisfaction his Mother ever had with him was spanking him.

"The only satisfaction his Mother ever had with him was spanking him. " - Anon, above

And, judging by the way he turned out, she probably never did that.

The ancient Rabbis tell us that the leader of a country is the country. In other words, if his decisions are evil, then the whole country is liable to punishment for them. The best example of this is Ancient Egypt, which was destroyed because of Pharaoh's evil decrees against the Jews, even though Pharaoh's subjects had no say in the matter at all.

HOWEVER...I am hopeful that since America DOES have a say, and has opted to replace Obama with a friend of Israel instead of someone as bad or worse than he, that the punishment for his spitting in G_d's face will be born solely by him, his family and his supporters.

Since the resolution is proceeding, I'm guessing N.Z. didn't get the message. Oh, well, neither did Pharaoh.