Abandoning the Jewish state at the U.N. last week may have only been the beginning for what President Obama has in store for Israel. He may have one more grand surprise left up his sleeve just weeks before he is set to officially leave office.

Forget about the chaos in the Middle East, Russia and China’s continuing aggression, Iran’s race to a nuclear bomb, ISIS’ worldwide terror campaign, and a potential genocide in South Sudan — Obama has his mind set on utilizing his last days in office toward sticking it to Israel.

Obama may declare in his final days in office that the United States recognizes an independent state of Palestine, a move that would undoubtedly have devastating security and diplomatic consequences for Israel.

Secretary of State John Kerry, who has been a thorn of moral equivalency in Israel’s side for years, is set to address a Jan. 15 peace conference in Paris. Rumors abound for Kerry’s exact agenda there, but there are worries that he will continue to publicly rebuke the Jewish state, or worse, announce recognition of a Palestinian state.

Kerry will join fellow foreign ministers of the world for a Paris Middle East peace conference. It does not appear that the confab will discuss any actions planned against ISIS or the Assad regime. They will not condemn Russia’s bombing campaign against innocent civilians. They will not address Iran-backed Hezbollah’s sectarian slaughter. Instead, the efforts of this conference will circulate around forcing their will upon Israel, the region’s only democracy. 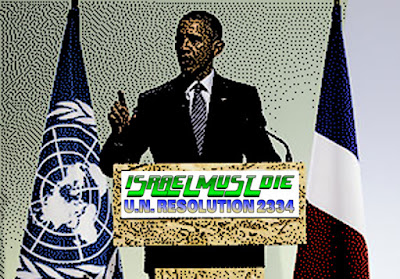 Israel has refused to even attend the conference, on the grounds that only Israel and the Palestinians should be negotiating terms of statehood, as terms should not be imposed on them by the international community.

Israeli Defense Minister Avigdor Liberman has compared the coming Paris conference to a “modern version of the Dreyfus Trial,” referencing the infamous 19th-century verdict against a French Jewish military officer that was stained by overt anti-Semitism. “This time, the whole people of Israel and the whole state of Israel will be in the guilty dock,” Liberman said.

Officials in Jerusalem are concerned that world powers may also use the conference to ready a plethora of vehemently anti-Israel motions in the U.N. Security Council, and utilize Obama’s last days to push them through.

Palestinian Authority President Mahmoud Abbas said Tuesday that he’s encouraged by the coming conference. He hopes that the conference mandates an end to Israeli housing construction in the West Bank and Jerusalem. Abbas presides over a government in the city of Ramallah that pays the families of terrorists who kill Israeli Jews.

Last week, the Obama administration abstained on a U.N. resolution condemning Israel. The resolution targeted Israeli “settlements” in disputed lands and announced that two of the holiest sites in Judaism — the Western Wall and the Temple Mount — and the entirety of the Jewish quarter of Jerusalem, were all “Palestinian” lands.

As Conservative Review’s Daniel Horowitz has explained, the resolution defies international law. Israel has the right to build in the disputed territories, and this right has been recognized by previous U.S. administrations.

The U.S. government, which has veto power over Security Council resolutions, could have voted no and blocked the measure. Instead, Team Obama chose to abstain, reportedly under the direct orders from the president himself, letting the resolution through.

The move has provided tremendous encouragement for Israel’s enemies, including the terror groups Hamas and Palestinian Islamic Jihad. They celebrated the Obama measure, declaring that it will lead to Israel’s “isolation” and “boycott.”

Israel has responded to the U.N. ruling with decisive ferocity. It has decided to cut funding from United Nations programs and recall ambassadors from countries that sponsored the resolution. Republicans in Congress have suggested that the U.S. should follow suit and slash funding to the U.N. as well. The U.S. contributes approximately $8 billion a year to the international body.

Unilaterally declaring a Palestinian state would cement President Obama as the most anti-Israel president since its founding. Will he betray the American people’s firm support for the Jewish state, and take his administration down the path of demonization and hate?

I put nothing past the Islammunist monster. He is petty, immature and a classic malignant narcissist. He is delusional and far overrates his abilities, intellect and allure. Intelligent adults who have been paying attention don't fall for his lies and deceit and pure arrogance in thinking he is fooling everyone. We recognize the daily taqiyya he spews because for Obama, lie-telling is akin to a normal bodily function, like breathing.

Good riddance Obama. You will NEVER bring down America. With your words and treasonous deeds you have only brought down yourself and your party. A truly deserving bunch of thugs, ignoramuses, greedy and self-serving thieves.

Oh, and that "legacy" you are so concerned about? It will stink to high heaven - just like you. Who needs to read more lies? Not I. Not anyone I know. Not REAL AMERICANS.

Trump is likely to have quite an interesting response to a shlt move like that, one Obama does not foresee.

Incredibly foolish. Their lack of recognition as a country protects them from Israel's retaliation. Otherwise, Israel would be more than justified in pursuing war against their many provocations.

To say nothing of closing the border and turning off the power.

The wonderful thing about Goobermint regulation is that they give you new ways of looking at and dealing with things. Computer controlled braking, commercial hand drying blowers, front loading washers, the new flammable refrigerants which are presented as being mommy earth friendly, and a the queer realities of the Obama administration which never deal with the dissemination of truth. In this mix of manufactured reality, techno crap and Chinese junk is the double flush, and I guarantee you no matter what Barry does, America is getting ready to do just that.
President Unelect, Soetoro should be held incommunicado or be forced to finish out his time in prison without a pen or a phone. Let his kids game that.

Jews, in Israel, America, and Europe, have used all of their influence to push for the sort of politics, thus politician, Zero represents. That they might have to pay the price is... not my monkey. Further, if this helps end the UN, even better.

Now, if Israel wants to remain nationalist, fine. Just don't bugger with our nationalism. Perhaps we need to renegotiate some things. It is very difficult to try to save someone who seems to be suicidal... same goes for a nation... more so perhaps. They'd better wake up and choose a better way or they will be left to their kin, as they seem to wish.