A work of short fiction by summer intern Biff Spackle, who is apparently auditioning for a gig at The Atlantic. Complaints may be sent to our public editor.

Crestus Strawberry (of the Duluth Strawberrys) was an avid Scrabble player. So avid that he would, on a weekly basis, wager more than $500 a game.

It was his quest for better tools with which to defeat his lexographical opponents that led him one day to push open the wood-framed glass door of Gobert's Thesaurus Shoppe on Pine Street.

The quaint tinkle of a bell somewhere above his head made him pause, but only for a moment.

He entered the store fully, breathing deep the aroma that all book shoppes have possessed since antiquity. It was a curious perfume of paper and dust and leather.

"May I assist you, young man?" asked the shopkeep, a tall sextagenarian with a shock of red hair and bifocals balanced precariously at the end of a long, straight nose.

"Indeed, my good man," Crestus replied, his fine breeding evident by the look of disdain he could, and would, assume at a moment's notice.

"I am seeking," Crestus continued, "your finest used Thesaurus, preferably vintage in nature and not overly expensive."

Wallace Gobert removed his glasses and then replaced them, this time riding higher on his nose.

"Well, young man, I am sorry to say that we don't carry a single used Thesaurus, only the freshest and untouched variety."

The expression young Crestus's face assumed was a sudden, gelatinous mixture of shock and anger.

"You mean to say, sirrr," slightly rolling the R to emphasize his incredulity, "a store called 'The Thesaurus Shoppe' contains not a single used Thesaurus?" 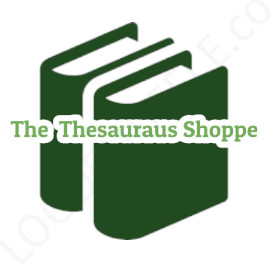 "That is correct, young man. However, may I interest you in ---"

"Not a single Thesaurus that is preowned, slightly worn, or soiled?"

"Not a single Thesaurus that is reconditioned, returned or gentrified?"

"Not a single Thesaurus that is moist, damp or mildewed?"

"Not a single Thesaurus that is not new, not untouched and not pristine in its original, silky smooth shrink-wrap?"

Crestus paused, considering his alternatives. A new Thesaurus was, obviously, out of the question for any Scrabble bettor.

Year after year, old synonyms were unceremoniously retired to make way for new ones. Any serious Scrabblist needed a library of little-publicized, vintage terms that would confuse and befuddle opponents.

"Got any used dictionaries?" he asked, and the Shopkeep surprised him with a firm nod.

"Why, of course, good sir, what kind of establishment do you think I'm running here?"

Postscript: nine months later, Gobart was forced to close his store, another victim of Amazon's relentless drive into the Thesaurus market.

Crestus Strawberry was taken in the third round of the National Scrabble League's Los Angeles Lexophiles professional franchise.

One of his word choices his rookie year made the Top 10 highlights on ESPN 42 ("The Number").

at 8:28 PM
Email ThisBlogThis!Share to TwitterShare to FacebookShare to Pinterest
Labels: Books, Water-cooler