TRUMP MAKES THE CASE: We Need a Wall to Save Lives

President Trump took rhetorical aim at his enemies as he delivered his first-ever prime time address from the Oval Office last night in a bold attempt to rally the country in favor of building a wall on the porous U.S.-Mexico border, his signature campaign promise.

In a live address Trump made a succinct case for a border wall on national security, economic, law and order, and humanitarian grounds.

The wall is needed “because there is a growing humanitarian and security crisis at our southern border,” Trump said at the beginning of his oration.

“Every day, Customs and Border Patrol agents encounter thousands of illegal immigrants trying to enter our country. We are out of space to hold them, and we have no way to promptly return them back home to their country.” 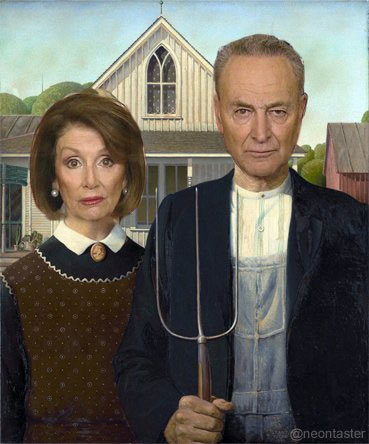 “Over the years, thousands of Americans have been brutally killed by those who illegally entered our country, and thousands more lives will be lost if we don’t act right now.”

“This is the most presidential I’ve seen President Trump,” Graham said on Fox News Channel. “It was compelling and everything he said was true.”

“I’m flabbergasted to hear from my Democratic colleagues who have voted for billions of dollar in border security money that this is manufactured. Was it manufactured when Obama wanted the money?”

“To my Democratic friends, how many caravans have to rush the border before you believe we have a problem?”

The speech came as the partial government shutdown ground on and as organizers were reportedly putting together plans for at least one new caravan of migrants to march north from Central America.

The House voted 217 to 185 on Dec. 20 to approve a temporary spending bill after adding $5.7 billion in appropriations for the wall. The measure went nowhere in the Senate and the partial shutdown got underway Dec. 22.

But that was back in the previous Congress. Now the Democrats control the House of Representatives.

In his speech Trump inveighed against the Democratic lawmakers, who, before he became president voted for the border wall, but who now refuse to support the wall because he is president and they don’t want to hand him a legislative victory.

Senator Chuck Schumer – who you will be hearing from later tonight – has repeatedly supported a physical barrier in the past, along with many other Democrats. They changed their mind only after I was elected president.

Democrats in Congress have refused to acknowledge the crisis. And they have refused to provide our brave border agents with the tools they desperately need to protect our families and our nation.

The federal government remains shutdown for one reason and one reason only: Because Democrats will not fund border security.

My administration is doing everything in our power to help those impacted by the situation. But the only solution is for Democrats to pass a spending bill that defends our borders and re-opens the government.

This situation could be solved in a 45-minute meeting. I have invited congressional leadership to the White House tomorrow to get this done.  Hopefully, we can all rise above partisan politics in order to support national security.

Those who claim a wall is immoral are being dishonest and hypocritical, Trump suggested.

Without identifying them by name, Trump listed some of those recently murdered by illegal aliens, including a police officer and an Air Force veteran in California, and a person in Georgia beheaded by his neighbor.

“How much more American blood must be shed before Congress does its job?”

“To those who refuse to compromise in the name of border security, I would ask: imagine if it was your child, your husband, or your wife, whose life was so cruelly shattered and totally broken?”

Trump fought back against the Left’s ongoing smear of immigration enforcement supporters.

Leftists deliberately conflate the illegal alien issue with immigration in general in order to paint Republicans who demand that immigration laws be enforced as racist and xenophobic. Trump made the point that just because he wants to enforce the law against illegals that doesn’t mean he doesn’t support lawful immigration.

America proudly welcomes millions of lawful immigrants who enrich our society and contribute to our nation. But all Americans are hurt by uncontrolled, illegal migration. It strains public resources and drives down jobs and wages. Among those hardest hit are African Americans and Hispanic Americans.

But the leaky border has also become “a pipeline for vast quantities of illegal drugs – including meth, heroin, cocaine and fentanyl,” Trump said.

“Every week, 300 of our citizens are killed by heroin alone – 90 percent of which floods across from our southern border. More Americans will die from drugs this year than were killed in the entire Vietnam War.”

The sieve-like border allows bad people to engage in human trafficking, he said, and a wall will mitigate the problem.

Last month, 20,000 migrant children were illegally brought into the United States – a dramatic increase. These children are used as human pawns by vicious coyotes and ruthless gangs. One in three women are sexually assaulted on the dangerous trek up through Mexico.  Women and children are the biggest victims by far of our broken system. This is the tragic reality of illegal immigration on our Southern Border. This is the cycle of human suffering I am determined to end.

Trump explained how the border wall, which he said would be a steel barrier rather than a concrete wall, would pay for itself in just a few years.

“The cost of illegal drugs exceeds $500 billion dollars a year – vastly more than the $5.7 billion dollars we have requested from Congress,” he said. “The wall will also be paid for, indirectly, by the great new trade deal we have made with Mexico.”

Now the ball is back in Congress’s court.

Meanwhile Jared "not elected to anything" Kushner and the cuckservative's darling of the Kavanaugh Hearings, Lindsey Graham are working hard to get the wall funded and to get Graham's lifelong wet dream of amnesty put in place. But probably, mostly the amnesty part. With McCain having assumed room temperature last year, it seems evident that Graham's pal from the Gang of Eight days, Schumer probably reached out to him to mediate a compromise and with Graham's history of going along to get along with Democrats it appears that Graham 2.0 isn't any different from RINO Graham 1.0