IN THE SANCTUARY CITY OF CHICAGO: There’s a Las Vegas Massacre Every Month

There were 59 murders in Chicago in September, the city where black lives don’t seem to matter to liberals and gun control zealots. The horrible death toll in the Las Vegas massacre is just a normal month in the gun control and murder capital of America. The Democratic caucus in Congress that seizes on Las Vegas as another crisis too terrible to waste in their pursuit of gun control says nothing about the Chicago carnage for which nary an NFL millionaire takes a knee while whining about social justice:

The murder toll in Las Vegas on Sunday makes it the deadliest mass shooting in U.S. history. 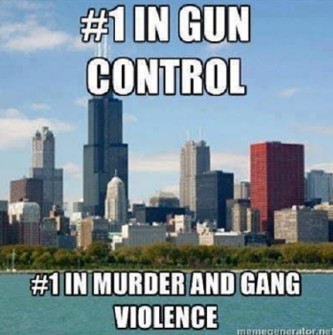 Know what they call that in Chicago? June.

Actually, there were 84 murders in Chicago, just in June, according to DNAinfo.com, which keeps a running tally.

And there were 59 murders in Chicago last month, so the death toll in Las Vegas — again, the deadliest mass shooting in U.S. history — was just a normal September there.

So far in Chicago, where Rahm Emanuel, former chief of staff for Barack Obama, is mayor, there have been 519 murders this year. And there's still a quarter of the year to go. But the numbers get crazy when totaling "gun violence" victims: In 2015, 2,988 people were victims of gun violence, according to records kept by The Chicago Tribune.

That number soared in 2016. There were 4,368 shooting victims last year, the Tribune reported.

The Las Vegas shooter is said to have scoped out a Chicago hotel overlooking its annual Lollapalooza concert venue, but he didn’t have to. Chicago gangs are doing the job quite nicely on their own. Much of Chicago’s violence stems from gang bangers, particularly those imported from south of the border, and from the steady supply of illegal drugs that are a consequence of open borders. It is called “gun violence” when it is in fact gang violence fueled by drug trafficking. As Katie Pavlich writes at TownHall:

As the violence in Chicago's gang plagued neighborhoods rages on, the underlying cause of the Windy City's murder rampages can be found thousands of miles away along a porous border. According to a report from Breitbart's Jeremy Segal, Mexican drug cartels are "allowed" to run Chicago's streets and young African-American men are killing each other as a result.

Harold “Noonie” Ward, a former high-ranking member of the Gangster Disciples, one of America’s largest street gangs, claims the deadly violence that is plaguing Rahm Emanuel’s “world class city” of Chicago is because Mexican drug cartels are being allowed by “the powers that be” to operate freely and “run” Chicago’s streets.

In an interview with Breitbart News outside of his childhood home, a now-condemned apartment in Altgeld Gardens, one of Chicago’s most well known housing projects, Ward explained that there are a number of issues leading to the bloodshed in the city. The greatest reason, Ward says, is drugs and how they are being brought into the city.“Where the drugs are coming from is Mexican cartels,” Ward said. “From Mexico to Chicago, they make $3.5 billion dollars a year. And the majority of violence in Chicago, comes from the Mexican cartels.”

Milwaukee County Sheriff David Clarke has spoken out on the issue of Chicago violence and how it is blamed on guns, not drugs.  In response to this liberal talking point which ignores the fact that Democratic bastions like Chicago and Maryland have the strictest gun control laws in the nation, Milwaukee County Sheriff David Clarke went on Fox Business Network’s Lou Dobbs to say that Rahmbo, a nicknamed earned for his White House ruthlessness,  was shooting blanks in suggesting the problem was guns and not the criminals who use them:

Sheriff Clarke describes Emanuel as “dead wrong,” observing that “he must have gone to the same school that ‘president’ Barack Obama did on how to run a law enforcement agency. This is what happens when you have community organizers and academic elites and others who don’t know a thing about policing in the American ghetto start to dabble in police science.”

Indeed as Investor’s Business Daily noted in 2013, the problem in Chicago has historically not been gun violence, but gang violence:

The fact is that up to 80% of Chicago's murders and shootings are gang-related, according to police.

By one estimate, the city has 68,000 gang members, four times the number of cops. A police audit last spring identified 59 gangs and 625 factions — mostly on the south and west sides — none of which is going to submit to things like universal background checks.

Still Chicago Mayor Rahm Emanuel touts gun control and not goon control and thinks you can make people safer by disarming them in the face of armed predators. While Emanual and others cry for new laws, existing laws are not enforced in Chicago, even with a native son, President Barack Hussein Obama, having occupied the White House during the last eight year’s of Chicago’s carnage.

A murdered Chicago teen's mother attends the president's speech on gun control, not knowing federal gun-crime prosecutions have in fact dropped on his watch — with the Windy City bringing up the rear.

Cleopatra Cowley-Pendleton, the mother of murdered 15-year-old Chicago teen Hadiya Pendleton, was one of 20 mothers who lost children to criminal violence who were at the White House last Thursday to hear President Obama speak once again on the need for gun control.

Obama met with her and some of the others in a small group before his formal remarks and told them "how serious this issue really is and something needs to be done about it," she said.

But President Obama did not tell this group that Syracuse University's Transactional Records Access Clearinghouse (TRAC) shows that the Northern Illinois district ranked 90th out of 90 in prosecutions of federal weapons crimes per capita.

David Burnham, co-director of TRAC, states their analysis says that according to case-by-case U.S. Justice Department information obtained under the Freedom of Information Act, there were 52 federal gun prosecutions in Illinois North (Chicago) in 2012, or 5.52 per million in population.

By this measure, compared with the 90 federal judicial districts in the U.S., the prosecution rate in Chicago was the lowest in the country.

If President Obama had a son, he might have looked like Amari Brown, the little boy killed by a bullet intended for his gang-banger father on the streets of President Obama’s Chicago in yet another bloody Windy City weekend. As the Chicago Tribune reported, over the Fourth of July weekend in 2015, Amari Brown was one of the ten that were killed among 55 that were shot.:

Among those killed was 7-year-old Amari Brown, shot in the chest as he watched fireworks near his father's home in Humboldt Park late Saturday night.  Police say they believe the attack was aimed at the father, whom they described as a ranking gang member.

Former Chicago Police  Superintendant Garry McCarthy got it right when he observed that Amari Brown was another victim, not of police racism, but of gang violence and a revolving door justice system:

Antonio Brown, who police say is a ranking member of the Four Corner Hustlers street gang, has been arrested 45 times on charges ranging from gun possession to burglary, and is not cooperating with detectives in their investigation into the slaying of his son, Amari Brown, police said.

McCarthy said that the elder Brown's last arrest was in April for gun possession after leading police on a vehicle pursuit. Brown was later released on bail in that case, Cook County court records show.

"If Mr. Brown is in custody, his son is alive," McCarthy, flanked by several police officials and other officers, told a room full of reporters at the Harrison District police station on the West Side on Sunday afternoon. "That's not the case. Quite frankly, he shouldn't have been on the street."

A lot of criminals shouldn’t be out on the streets, particularly those convicted of gun crimes. Many gun and gang crimes in Chicago are drug-related  President Obama has commuted the sentences of many drug offenders, including those who possessed a gun during the commission of their crimes:

President Obama on Thursday commuted the sentences of nearly 100 federal inmates doing hard time, and almost one in five were in jail partially because of the illegal guns they carried….

Of those who had their terms commuted this week, 19 were behind bars on a combination of drug charges that also involved firearms possession– often multiple counts– usually by a prohibited possessor….

The President commuted 111 federal prisoners in late August, in which a number of those with firearms charges were featured. Earlier the same month he did likewise for 214 inmates including 56 with gun felonies.

Chicago police Superintendent Eddie Johnson renewed his call on Friday for stricter penalties for gun offenders after a police commander was shot at while working on the South Side….

The violence hit close to home late Thursday when Noel Sanchez, commander of the South Chicago police district, was shot at while working the streets in the 8800 block of South Saginaw Avenue. The gunman fled to a nearby home, touching off an hourslong standoff with a SWAT team before five people were taken into custody early Friday. Multiple guns were also recovered.

Johnson cited the incident as an example of how gang members have become more emboldened, in part because of what the superintendent considers lenient penalties for gun offenses….

Johnson spoke once again in favor of proposed legislation in Springfield designed to make it harder for judges to impose light sentences for repeat gun offenders. The goal of the legislation is to ensure that they face several years in prison.

He singled out a 21-year-old man as an example of why the legislation is needed. The man was arrested in February on a felony weapons violation and sentenced to seven years in prison in April, police said. But he was assigned to boot camp and was already out on parole Aug. 22 when he was arrested again for gun possession in the West Side's Austin community.

Every month in Chicago there’s a mass murder fostered by liberals who blame the NRA and not the criminals who kill the innocents. Outlawing bump stocks will not make Chicago’s streets safer. Let the liberal politicians, Hollywood celebs and NFL millionaires come to Chicago and take a knee for the victims of their lax law enforcement and sanctuary city policies.