BLOODBATH: War In Korea Would Kill Hundreds Of Thousands In Days, Even Without Nukes

If the U.S. and its allies decide to go to war against North Korea, blood is expected to run like rivers on the peninsula, a new study revealed.

North Korea has spent decades building a massive conventional force, which includes tens of thousands of artillery units, as well as weapons of mass destruction ranging from nuclear to biochemical. Even if North Korea “uses only its conventional munitions, estimates range from between 30,000 and 300,000 dead in the first days of fighting,” a new Congressional Research Service report obtained by Bloomberg revealed.

A former CIA chief focused on the growing crisis on the Korean Peninsula previously gave a similarly-sobering estimate during an interview with The Daily Caller News Foundation. 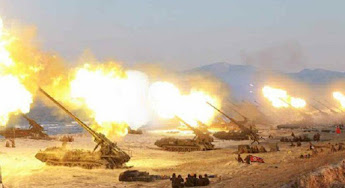 “When I was in government, when we ran war games, the estimates were hundreds of thousands of casualties, and that was before we thought North Korea had nuclear weapons,” Bruce Klingner, the former chief of the CIA’s Korea branch and now a senior research fellow for Northeast Asia at the Heritage Foundation’s Asian Studies Center, told TheDCNF.

“There are 21 battalions” just over the border, explained South Korean Defense Minister Song Young-moo, pointing to the North, “Defending against this many [long-range artillery units] is unfeasible.” He said that the allies would have to find a way to destroy the North Korean allies “the moment the war starts,” a task much easier said than done.

The 62-page congressional research report, which was presented to lawmakers Friday, also expressed concerns that the conflict could spread and wreak havoc across the entire region.

“Such a conflict could also involve a massive mobilization of U.S. forces onto the Korean Peninsula, and high military casualty rates,” the report said. “Complicating matters, should China choose to join the conflict, those casualty rates could grow further, and could potentially lead to military conflict beyond the peninsula.”

China has signaled that if the U.S. launches an unprovoked military campaign in Korea, it will intervene to preserve peace and stability in Northeast Asia, but it is unclear how China might respond were an actual war to break out on the peninsula, especially given documented evidence of deteriorating relations between Beijing and Pyongyang.

Another daunting challenge is North Korea’s nuclear, chemical, and biological weapons stockpiles and its ability to deliver such payloads to distant shores. The rogue regime has ballistic missiles to bring devastation to targets at different ranges, from South Korea and Japan to Guam to parts, if not most, of the continental U.S.

The Defense Intelligence Agency concluded this past summer that North Korea has at least 60 nuclear warheads and the means to mount them on ballistic missiles. As that assessment came out before North Korea’s sixth nuclear test, during which it detonated successfully a suspected staged thermonuclear bomb with an explosive yield far greater than anything the regime has previously tested, the North Korean threat is now even more alarming.

Were North Korea to use its full range of capabilities in a conflict — and there is significant evidence they would — the death toll for such a war could rapidly soar into the millions.

NEOCON PROPAGANDA. North Korea has a military that in reality is a museum . 90% of there "fire power" was manufactured before 1976. 70% of it was manufactured before 1968. There is no proof that they have atomic weapons. NONE. North Korea is a "paper Tiger" as Mao Zee Dong put it. More than anything else they remind me of the school bully yelling "I'm gonna hit ya" until they get a bloody nose. After "Osama is in Tora Bora" and "WMD in Iraq". Story's that give the NEOCON's cover for war don't get much traction with me anymore.---Ray

As for the WMDs in Iraq that ended up in Syria, God Forbid they fall into the hands of Iran or North Korea. Just sayin'... https://www.facebook.com/notes/joe-kidd/for-the-record-wmds-were-there/761840163828541/

NEOCON's cover for war don't get much traction with me anymore.---Ray