What 'gun law' would have prevented the Vegas Massacre?

There are more questions than answers concerning the Las Vegas massacre. In the frenzy to cover a story with so many glaring unknowns, contradictory information comes out. Some reporters are focused on getting a scoop, others on parroting the official line, and others on exploiting the situation to advance an agenda.

What’s real, what’s not, what’s being deliberately planted, and by whom?

With a flood of information coming from so many sources of indeterminate reliability, it’s almost impossible to know who – or what to believe. So we ask questions.

First and foremost, because government officials control what information about the investigation is released and withheld, why should we automatically assume everything we’re being told is straight, and just the facts without spin? Especially when they’ve given us plenty of cause to question their trustworthiness from past examples of systemic corruption? Whose fault is it if some of us take what we’re told with a grain of salt, and if others flat-out don’t believe a word they say?

For that matter, what incentive has the “mainstream media” given gun owners to believe them?

But doesn’t that lead to disinformation and “wild conspiracy theories”?

It can. That’s why it’s important that those of us who are serious about the right of the people to keep and bear arms keep our heads, ask questions and evaluate answers with a critical eye for reasonability, past source credibility and the like.

So why would we automatically believe the FBI when they tell us there is no ISIS connection when they haven’t even been able to turn up prosecutable evidence after months of investigating the Trump campaign for collusion with the Russians to sabotage Hillary Clinton’s election?

Determining the truth requires a sober analysis with eyes wide open. And there's one question that needs to be answered but won't be.

What’s the deal with “shooter” Stephen Paddock? Did he really act alone – or at all? Was he a patsy? And he’d been there for several days and the hotel staff noticed nothing out of the ordinary? 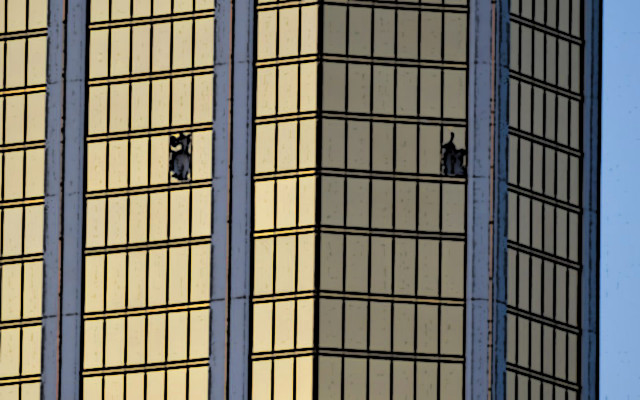 Did he really have no religious or political affiliations? Was that him in that anti-Trump demonstration video making the rounds? Should we believe those who say “Yes” or those who say “No”? How is it he’s such an enigma, the one guy we can find practically nothing about, especially on social media?

And why is “progressive” media so determined to discredit questioners?

How does his having been “white” play into the SPLC meme of who the dangerous extremists are? And speaking of that, more than one “progressive” blood dancer has celebrated the fact that the victims at the country music concert were overwhelmingly white and of middle class means. The “flyover country” demographic has heretofore been less sympathetic to gun owner control edicts than any other, and it’s fair to ask: Will we soon see targeted efforts to change that?

What effect will this have on pending legislation, specifically efforts to advance the SHARE Act and nationwide concealed carry reciprocity? Will “moderate” Republicans be anxious to associate their names with that before the mid-terms, and if so, how will they vote? CNBC reports Paul Ryan “has no scheduled plan.” That should surprise no one.

How will the larger effort to oust President Donald Trump play out? His “message of unity” notwithstanding, can we expect an uptick in “climate of hate” rhetoric?

All these and more are questions that will continue to be asked, and that we can expect answers to – whether we believe them or nor being another story. But there’s one question that will not be answered, at least by top Democrat politicians and/or gun-grab groups of national influence.

“Something must be done!” they scream in unison whenever a blood dance opportunity presents itself.

Ask them, “What?” and they have no definitive answer.

Oh, sure, we’ll see no shortage of impulse control-challenged celebrity lunatics, safe-district collectivist politicians and apparatchik “journalists” out there foaming at the mouth about banning all guns being the “solution,” but those pulling the strings know better than to show their hand before it’s time.

So force their hand. Throw one question at them and don’t let them get away with stalling, equivocation or changing the subject:

“What ‘gun law’ would have prevented the Las Vegas massacre?”

Forbid Leftists to own guns.

None. If we cant control the borders or stop the drug trade then the answer is none. Once you ban something, you create an instant market for the banned item. Re prohibition