EXPOSED: How Another 9/11 Attack By Militant Lutherans Was Foiled

“A trio of maniacal terrorists targeted women and children — hoping to make ‘an ocean out of their blood’ — in a failed attack they dreamed would be on par with 9/11,” wrote Denis Slattery Victoria Bekiempis and Graham Rayman in the New York Daily News.

Haroon told an undercover agent he wanted to “cause great destruction to the filthy kuffars by our hands.” The trio sought to create the “next 9/11” and the most eager was El Bahnasawy. As the CBC reported, in May of 2016, while in Canada, El Bahnasawy purchased bomb-making materials, including 18 kilograms of hydrogen peroxide, “a key ingredient in making improvised explosive devices,” along with batteries, thermometers, aluminum foil and Christmas lights. 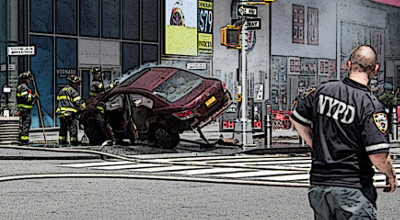 That month, El Bahnasawy contacted Salic, whom he knew as “Abu Khalid” and “the doctor,” to seek funding for the operation. El Bahnasawy had also assembled maps of the New York subway system, explaining that he wanted to “blow up” lines 4, 5 and 6 and the number seven train. Targeting the “purple” and “green lines,” would make for an easy escape in “the vehicle.”

As the Daily News and other publications also reported, El Bahnasawy touted a photo of Times Square, and told his fellow terrorists, “We seriously need a car bomb at times square... Look at these crowds of people!” He also wanted to shoot up concerts “cuz they kill a lot of people.”

As the Toronto Star reported, Haroon said the subway trains made a “perfect target” and they should shoot as many passengers as possible, including women and children. “NY Needs to fall. It’s a must,” Haroon wrote to the undercover agent. The Star also noted that Salic told the others, “it would be a great pleasure if we can slaughter” people in New York City.

As NBC News explained, El Bahnasawy told the others, “We just need guns in our hands. That’s how the Paris guys did it.” Then, “when we run out of bullets we let the vests go off.”

The three Muslims timed the attack for June, in 2016 the Islamic holy month of Ramadan. Canadian and U.S. authorities worked in tandem and the RCMP is on record that the public was never in danger.

In May, 2016, El Bahnasawy was arrested in New Jersey and last October pleaded guilty to seven charges including: Conspiracy to use weapons of mass destruction, conspiracy to commit acts of terrorism transcending national boundaries, conspiring to bomb a place of public use and public transport, and conspiracy to provide material support to terrorists.

In Canada, El Bahnasawy was portrayed as something of a victim. His lawyer Sabrina Shroff told the CBC he was young and “vulnerable,” adding, “It’s a very difficult situation undoubtedly — not just for him but also for his entire family.”

Syed Soharwardy of the Islamic Supreme Council of Canada told Global News that El Bahnasawy’s views could be found at some mosques but that anti-Islamic sentiment in Canada could make Muslims more likely to support a terrorist organization. “Islamophobia helps others to be radicalized,” Soharwardy explained, and until the Islamophobia “which is going on in our communities” stops, the radicalization is “going to continue.”

On the other hand, Amarnath Amarasingam of the Institute for Strategic Dialogue, told Global News: “We have a young man from Canada receiving bomb making instructions from operatives linked to ISIS’s Khurasan province and financial assistance from ISIS networks in the Philippines. This has huge implications for how we approach ISIS’s loss of territory in Iraq and Syria, since it’s clear that their networks elsewhere could pose an equally serious threat in terms of attack planning in Western countries.”

University of Waterloo professor Lorne Dawson, a specialist in terrorism and radicalization, described the plot as “amateurish” but added that it is “very easy” for anyone to connect with ISIS sympathizers online. According to Dawson, El Bahnasawy’s home base of Mississauga, in the Toronto area, is one of the top places for this kind of activity.

El Bahnasawy will be sentenced on December 12. Haroon and Salic await extradition to the United States.

Meanwhile, Abdulahi Hasan Sharif, the Somali refugee with the “genocidal beliefs” who last week rammed and stabbed Edmonton police officer Mike Chernyk before injuring four other Canadians, was deported from the United States in 2011.

As The Star reported, in 2012 Hasan Sharif crossed legally into Canada and obtained refugee status. Police found an ISIS flag in the car he used to ram the police officer but “no terror charges have been laid.”