Book Review: All But My Life 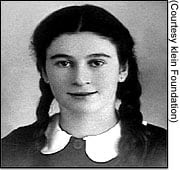 I recently had an opportunity to hear Gerda Weissman Klein speak of her experiences as a Holocaust survivor. You may remember Ms. Klein from the HBO Film based upon her startling story, which won an Academy Award. As a pampered, fifteen year-old Jewish girl in 1939, her idyllic family life came to an abrupt halt when the Nazis rolled into their small Polish town.

For a short period of time, her family was permitted to remain in their house, albeit in the basement. Over time, her family unravelled, shipped off one at a time. Her beloved brother, Arthur. Her father. Her mother. All disappeared, never to be seen again. By 1942, she began her journey through a series of increasingly harsh slave-labor camps, using an ability to speak German and a quickly acquired expertise on garment looms. Only through a series of fortuitous coincidences, sacrifices of friends, and even a few benefactors among her captors, was she able to survive the factories.

By 1945, the Nazis were on the run and their prisoners were forced to move back into Germany. Stripped of all possessions except for some photographs tucked into her ski boots (which her father had presciently demanded she wear the summer she left home), she survived the 350-mile winter "death march". Only 120 of 2000 girls survived the forced march and Gerda herself was liberated by American soldiers only hours from death: she weighed 68 pounds when Lt. Kurt Klein, who was to become her husband, rolled into town.

There are few, if any, more compelling first-person stories of survival against all odds. Perhaps John Ransom's Andersonville Diary qualifies. But those who are unfamiliar with the concept of true evil would do well to read Gerda's unbelievable story of human spirit, and courage without measure.

All But My Life

at 6:12 AM
Email ThisBlogThis!Share to TwitterShare to FacebookShare to Pinterest