It's Hillary's World, We're Just Livin' in It 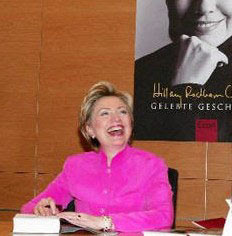 Here are latest updates on the '08 Hillary/Obama ticket, which I'm certain you've been awaiting with all the nail-biting anticipation of Tara Reid at the Oscars.

The IT Professionals Association of America is ticked at Hill:

John McCain doesn't believe Hill will ever be president:

Joe Biden thinks Hill will be the Democratic nominee in '08, as reported by Newsday's Joseph Dolman:

And Bill Clinton thinks his wife would make an excellent president.

I take that to mean that Hillary would sell even more critical defense technology to enemies of the US, accept even more cash donations from suspect sources, allow innocents to be massacred while mingling at the President's Cup golf tournament, and perhaps even commit adultery in the White House.

And those hoping for a repeat of Clinton's boom by electing Hillary are grasping at straws.

Here's a news flash: the Y2K and Internet booms were products of (a) an anomalous, time-based event; and (b) the genius of web inventor Tim Berners-Lee, respectively. Clinton just happened to be in office when these two tidal forces washed over the US economy. Take away those two events and Bill Clinton's economic legacy would be far, far different.

Electing Hillary president would be akin to giving a drunken teenage boy keys to the Porsche. Way more things can go wrong than can possibly go right.

at 12:52 PM
Email ThisBlogThis!Share to TwitterShare to FacebookShare to Pinterest