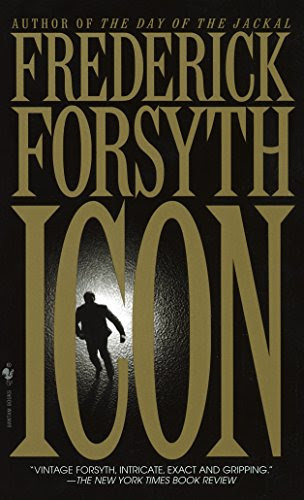 Though it was published in 1996, Icon is especially relevant today, given Russia's wavering stance on democracy. Icon looks several years into the future, to a day where Russian crime syndicates, a teetering economy, and an American-style public relations campaign conspire to carry a man named Komarov to the office of president.

The British embassy in Moscow, however, accidentally acquires a document Komarov never meant to make public. Called The Black Manifesto, it describes his plans to consolidate power, recapture the breakaway Soviet Republics, and launch a program of genocide against any religious group that could oppose him: Christians, Jews, and Muslims alike. In this effort, he is funded by a major mafia syndicate and has the support of a para-military organization not unlike Hitler's brown-shirts.

While the manifesto alone is not enough to stir official Western government action against Komarov, it is sufficiently worrying that senior officials feel they must act. Retired British spymaster Sir Nigel Irvine, a hero of the Cold War, is brought back into the fold. And spyrunner Jason Monk, formerly of the CIA, is unretired.

Like chessmasters, Irvine and Komarov move their pieces across the board in this brilliant, complex and wide-ranging novel. With the fate of Russian fascism -- and a Nazi-style genocide -- hanging in the balance, Irvine and Monk are the last, best hopes for a democratic Russia.

at 7:00 AM
Email ThisBlogThis!Share to TwitterShare to FacebookShare to Pinterest