Irony, thy name is IBM 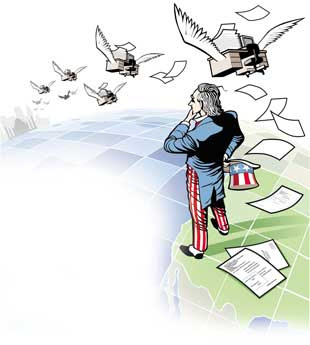 IBM and North Carolina's Research Park Triangle are whining and moaning about the paucity of students entering computer science.

Irony, thy name is IBM. Allow me to quote from another article, dated May 19th:

Gee, I wonder if IBM's Everest-sized outsourcing effort has dampened the enthusiasm of any would-be computer science majors? Or whether IBM's recent announcement that they'd be slashing 10,000 or so jobs has had an impact?

Hey, Gina: do you think IBM could take the time to clearly outline some career paths for Computer Science grads in the age of low-cost IT labor?

I perfectly understand the need to source from the lowest-cost provider able to meet IT's requirements. That's called "capitalism". We all need to accept that. What I don't understand are IT firms constantly harping on a C.S. talent shortage while shipping jobs overseas faster than Ben Johnson on Dianabol.

If these firms expect to attract beautiful minds to the computer science world, they better enunciate a career path: how the best and brightest Americans can coexist with cheaper, foreign talent.

Look, I'm a fortunate guy. I was weaned on real-time, Intel assembly code, moved on to mass-market consumer software products, and then migrated to large-scale enterprise IT and eBusiness. I worked for and with some of the smartest folks on the planet at places like Procter & Gamble.

But I also had to create my own Computer Science career path, with no guidance whatsoever. It's alot to ask a 19 year-old, picking a major, to go into a field where ostensible competitors may be earning $12,000 a year.

And, not to be maudlin, but it's also a national security issue. Information processing and information security will be two of the most strategic areas for the U.S. as it meets the challenges of the 21st century.

But it would behoove both industry and academia to explain just how C.S. graduates can coexist with labor dredged from the lowest-cost pools on the planet.

My oldest daughter is preparing for college. In the tenth grade, she scored something around a 1350 on the SAT's (old scoring - out of 1600), with no practice whatsoever. She's stubborn, brilliant, and a logical thinker. I'm recommending she consider law school.

at 9:03 PM
Email ThisBlogThis!Share to TwitterShare to FacebookShare to Pinterest