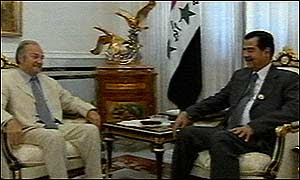 You may remember George Galloway's testimony in front of the Senate committee investigating the UN Oil-for-Food debacle. In a manner more accustomed to Parliament's House of Commons, the MP went on offense, blustering, accusatory, and piercing.

For a brief, shining moment, Galloway became an icon of the mainstream media/DNC (a singular noun). The San Francisco Chronicle went so far as to label him a "media hero".

Galloway's bluster couldn't obscure the facts, however. Galloway was in front of the Senate because he ran the controversial Mariam Appeal, which raised enormous amounts of money and then (apparently) disappeared. The Mariam Appeal, according to Sexion, was the political organization set up to "protest" the Iraq sanctions.

According to the Telegraph, Saddam's precious oil-for-food vouchers included the names of intended beneficiaries. Among the parties listed: Zureikat, Galloway and "Mariam's Appeal".

And, coincidentally, "Galloway moved the financial statements and other documents of the Mariam Appeal from the UK to the Middle East".

The seedy involvement with Oil-for-Food financier Zureikat was the question before the MP on the day of his testimony. Let's listen in.

Sexion effectively tears Galloway's testimony to shreds... in a manner reminiscent of Genghis Kahn. It would appear that Galloway's ersatz indignation was as genuine as his testimony. Which is to say his statements were as valuable as a Hillary Clinton three dollar bill.

It goes without saying: read the whole thing and suckle at the teat of wisdom.

Seixon: With all due RESPECT, Mr. Galloway…